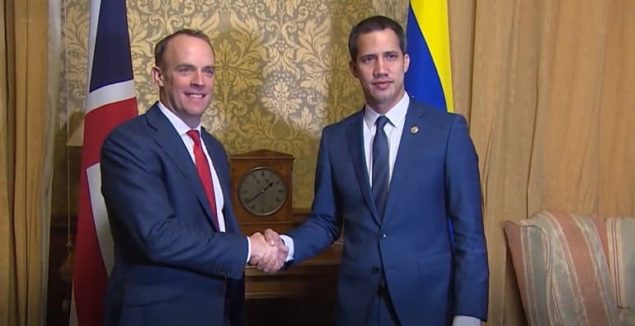 Documents obtained under the Freedom of Information Act have exposed a secretive Foreign Office unit aimed at the ‘reconstruction’ of Venezuela.

Red Lines host Anya Parampil speaks with journalist John McEvoy about his recent bombshell report published in The Canary, which reveals the existence of a previously unknown “Venezuela Restructuring Unit”.

Documents obtained under the Freedom of Information Act have exposed a secretive Foreign Office unit aimed at the ‘reconstruction’ of Venezuela. The files also reveal private discussions between Venezuelan opposition figures and UK officials, detailing proposals for the promotion of British business after a planned coup.

Over the past 16 months, the UK government has consistently supportedVenezuelan opposition figure Juan Guaidó’s attempts to topple the electedgovernment of president Nicolás Maduro.

In late January 2019, for example, the UK Foreign & Commonwealth Office (FCO) urged the Bank of England to grant Guaidó access to £1.2bn of Venezuelan gold reserves.

The Department for International Development (DFID) has also pledged some £40m of ‘humanitarian assistance’ to Venezuela, but it has refused to reveal where this assistance is going.

In January 2020, Guaidó travelled to London to meet with UK government officials and shore up international support for his flailing efforts to overthrow the Venezuelan government.

Documents obtained under the Freedom of Information Act offer details of his visit, and reveal the existence of a specialist unit within the FCO dedicated to the ‘reconstruction’ of Venezuela.

Notably, the list also includes “Head [of the] Venezuela Reconstruction Unit, FCO”, John Saville. The existence of this unit has never been publicly acknowledged by either the FCO or Saville, who was formerly UK ambassador to Venezuela (2014-2017). Saville’s biography on the UK government’s website, for instance, bears no mention of the unit. 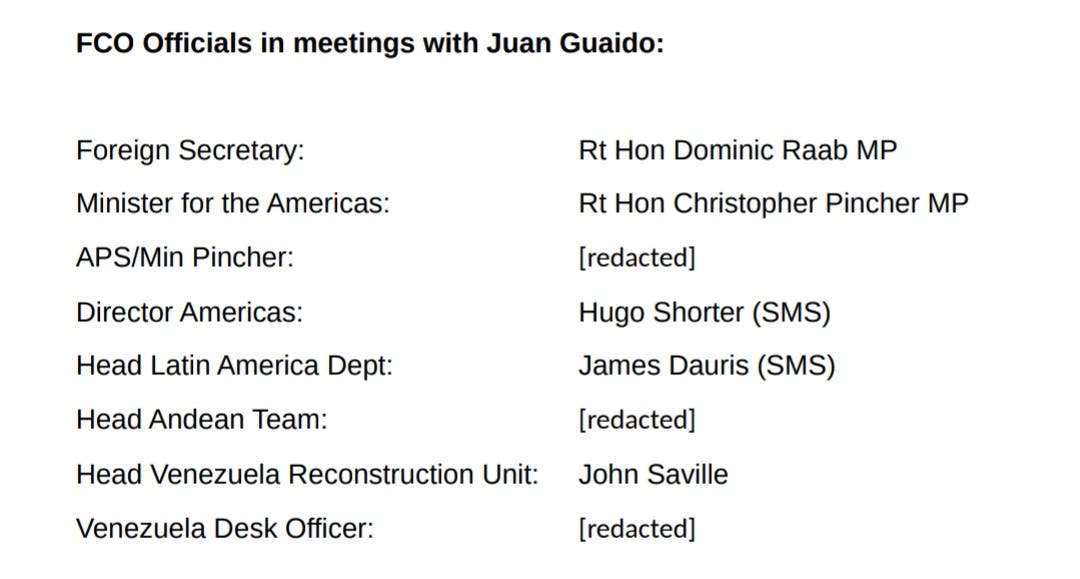 When asked what the purpose of the Venezuela Reconstruction Unit is and why its existence had not been revealed, an FCO spokesperson told The Canary:

The UK is committed to working with international partners to bring an end to the appalling crisis in Venezuela.

The FCO’s Venezuela Reconstruction Unit was set up in Autumn 2019 to coordinate a UK approach to international efforts to respond to the dire economic and humanitarian situation in Venezuela.

The United Kingdom underlines its support for interim constitutional President Guaidó and his efforts to lead Venezuela towards a peaceful and democratic resolution of the appalling crisis the country is facing [emphasis added].

Saville was a central figure in organising Guaidó’s visit and, by January 2020, plans were already underway for a violent incursion into Venezuela by US and Venezuelan mercenaries – a plan which, according to the US mercenary in charge, was signed off by Guaidó himself. Indeed, the full contract leaked to the Washington Post names Guaidó as “Commander in Chief” of the entire operation. Guaidó has denied involvement.

This was not the first scandal of its type. In February 2019, Guaidó was assistedover the Venezuelan border by a Colombian narco-paramilitary cartel before attending an ‘aid’ concert organised by Richard Branson. Funds raised by this concert were then reportedly embezzled by the Venezuelan opposition, and food packages were left to rot.

The UK government’s commitment to bringing “an end to the appalling crisis in Venezuela” through a secretive FCO unit thus seems, to put it lightly, insincere.

The existence of the unit also raises a more fundamental question: What business does the UK government have in the “reconstruction” of a sovereign nation? The people of Iraq, Afghanistan, Libya, and Syria may have something to say about this.

On 17 January, an official notes that an unnamed media company in London “wants [Guaidó] to come into the office for a roundtable with their editors and they could do a special feature on the resurrection”.

Another unnamed official boasts on 21 January 2020 that: “This [visit] has gang busters”, meaning a massive impact: “Now CNN International wants to be squeezed in between BBC and FT.” 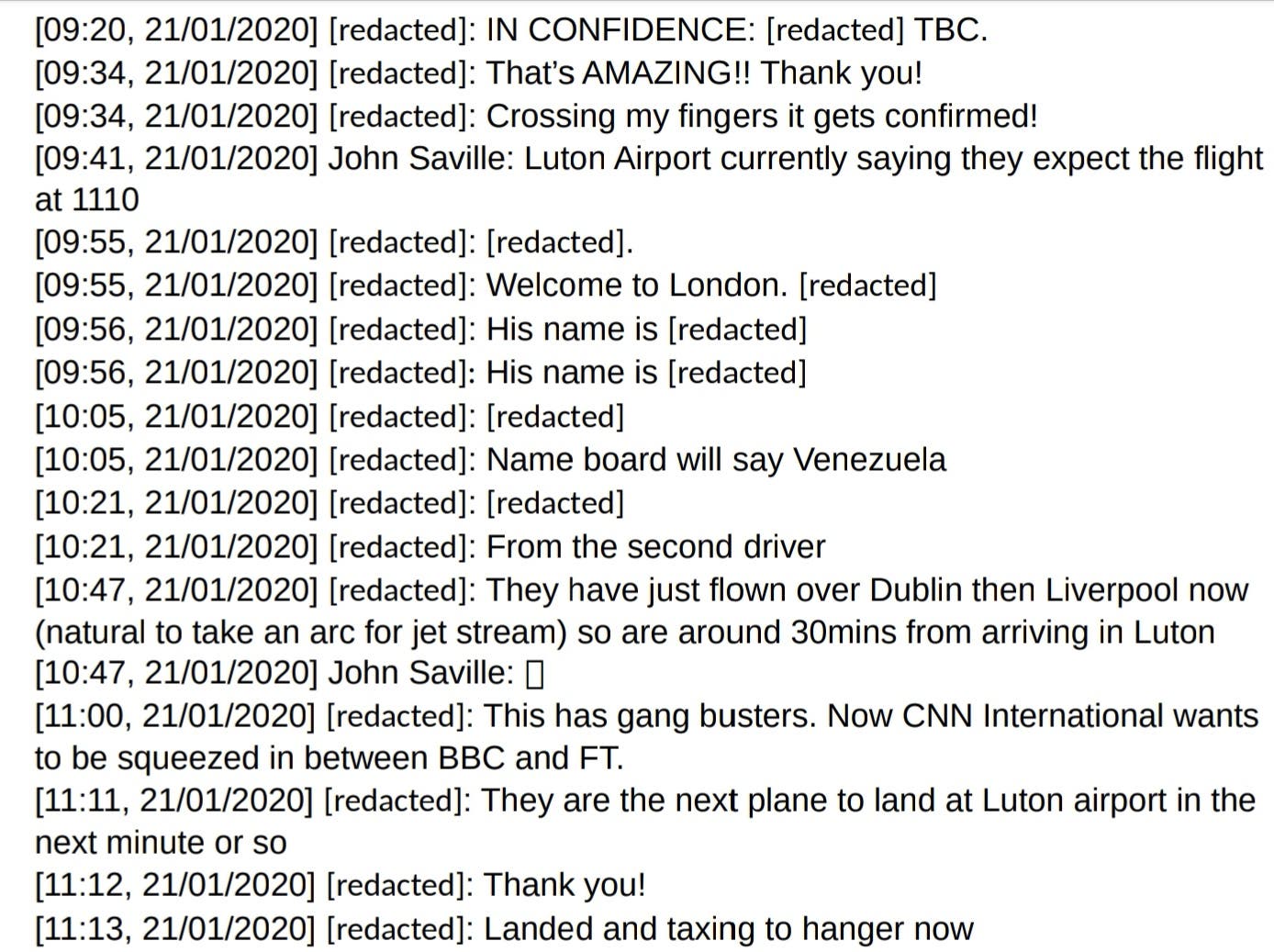 “I would like to request a meeting with Secretary Raab, as soon as feasible,” Neumann wrote to FCO officials in July 2019:

I understand he was the FCO’s legal liaison to the ICC [International Criminal Court] for years, and his family background is almost identical to mine and Madeleine Albright’s

In July 2019, Neumann also described meeting former US secretary of state Madeleine Albright as “a dream come true for me: meeting my teenage idol… Now I hope to glean some of her wisdom to help me fight for Venezuela’s freedom.”

Journalist Glenn Greenwald has described Neumann’s “teenage idol” as “one of the most deranged and bloodthirsty warmongers to occupy a high government position in decades”. In 1996, for instance, Albright told PBS News that the deaths of “half a million [Iraqi] children” resulting from US economic sanctions were “worth it”.

The parallels with Venezuela are particularly concerning. Neumann consistently encourages “strong targeted sanctions” against Venezuela which, according to the Centre for Economic and Policy Research, “killed 40,000 people… between 2017 and 2018”. More recently, former UN human rights expert Alfred de Zayasestimated that this number likely exceeds 100,000.

In May 2019, Neumann wrote to FCO officials that she had “reached out to Rory Stewart at DFID for a meeting that will… sustain British business in Venezuela’s reconstruction [emphasis added]”. This suggests the very nature of British ‘reconstruction’ of Venezuela: garnering favourable conditions for British business. And one can only guess at what these “British business” interests might be within a country that reportedly sits on the world’s largest proven oil reserves.

Indeed, in September 2019, Neumann was reportedly secretly recorded“surrendering Venezuela’s claim to the disputed Essequibo region in exchange for political support from the UK government”.

Also in May 2019, meanwhile, Neumann privately encouraged the FCO to publicly “pronounce itself in support of our democratic forces, your partners… before my interview on BBC World Service to discuss the matter in one hour”. 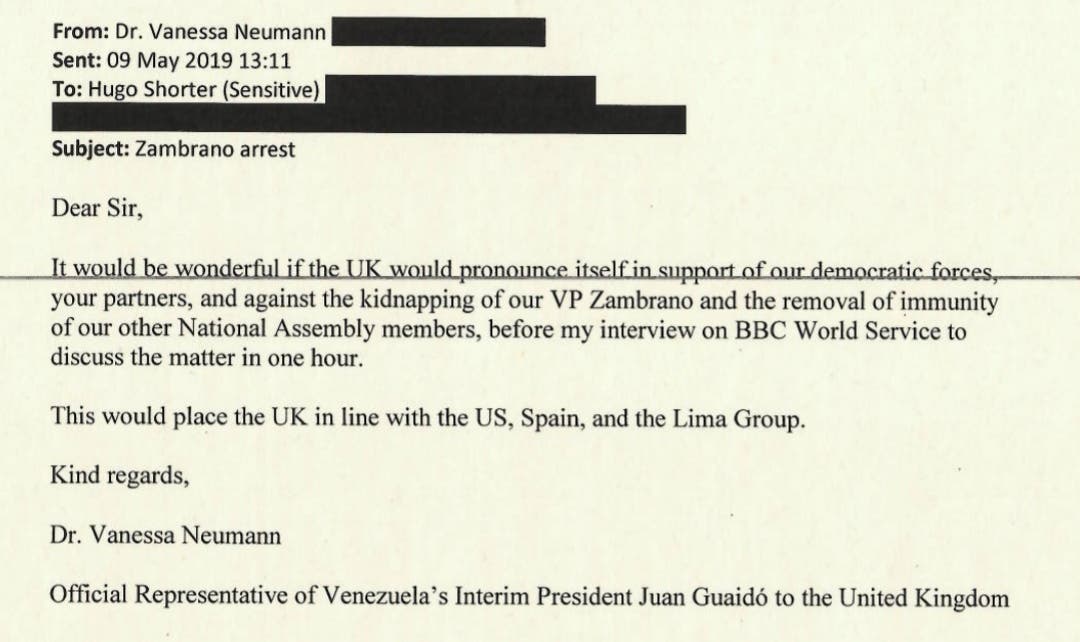 Later the same day, Neumann was reassured by an FCO official that “the Foreign Secretary [Jeremy Hunt] has just tweeted” in support of Edgar Zambrano, who was charged with treason, conspiracy, civil rebellion, usurpation of responsibilities, criminal association, and public instigation to disobey the law after joining an armed coup attempt.

The private discussions between Neumann and FCO officials also entail “Venezuela debt restructuring” and a ‘new Venezuela military attaché’, though these conversations have been redacted almost entirely. 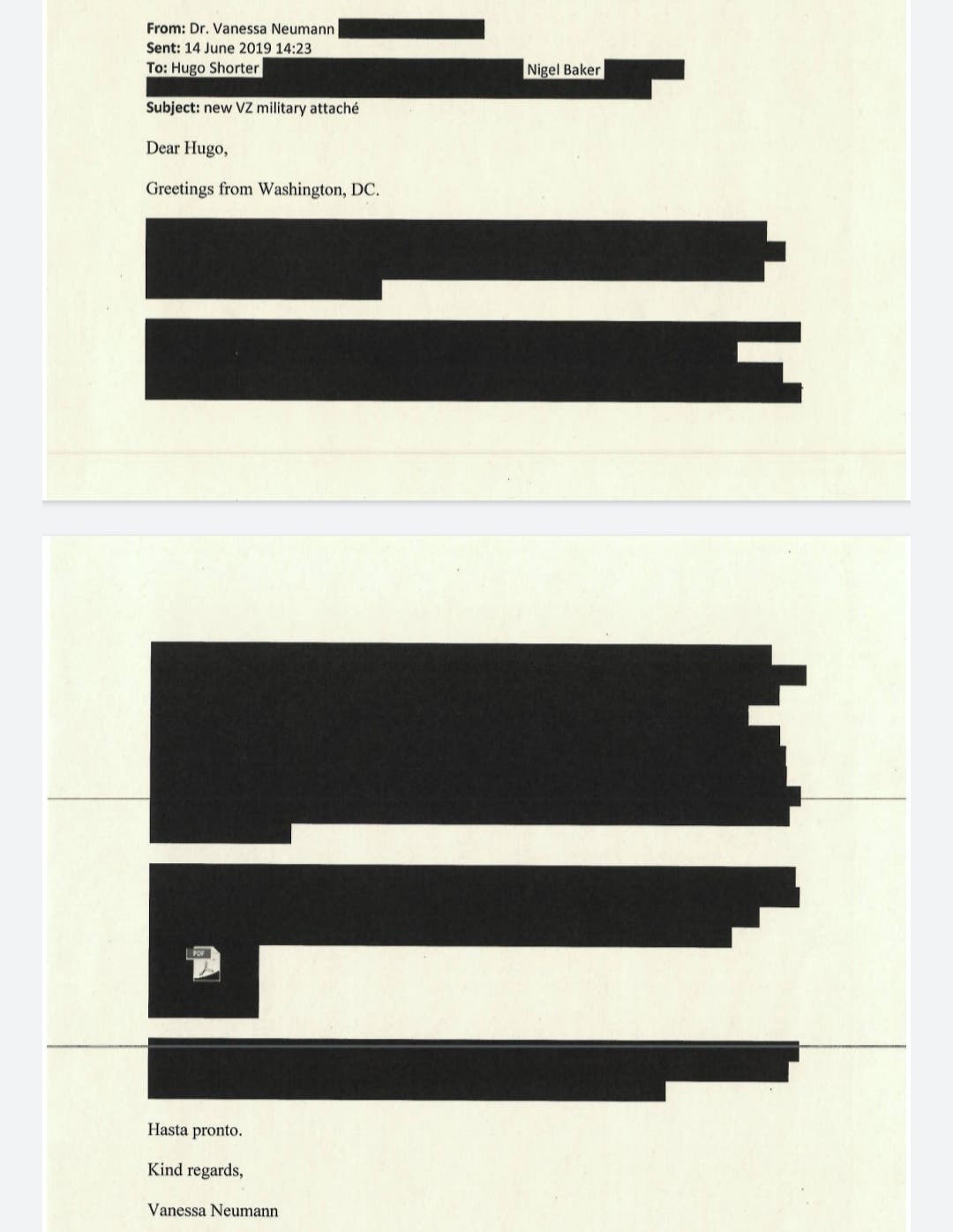 “We are consistent in our view that Maduro is illegitimate”, the FCO’s Latin America department head Nigel Baker assured Neumann in May 2019, “and in our support for Juan Guaido”.

“Excellent. Thank you, Nigel,” responded Neumann. “We appreciate your support, which is critical for us now and in our reconstruction.” Elsewhere, Neumann praises Britain’s “historic role in concepts of liberty and justice (I used to teach political philosophy, and particularly loved the British thinkers)”.

Neumann is also the CEO of Asymmetrica Limited, a “strategic communications” firm whose website dons quotes from Henry Kissinger.

Alongside Neumann, the names Alec Bierbauer and Michael Marks were listed in 2015 as co-directors of Asymmetrica. Both are closely connected to the US military and intelligence services. Bierbauer was a central figure in the development of Washington’s drone warfare programme. Marks, meanwhile, “has worked around the world within the US intelligence and special operations community, a career that stretches from the jungles of Nicaragua to the mountains of Afghanistan”.

In 2018, Bierbauer and Marks published a book entitled Predator Rising: How a Team of Renegades Broke Rules, Shattered Barriers, and Launched a Drone Warfare Revolution. The book offers “the inside story of how a CIA agent and an Air Force officer joined forces to develop America’s most powerful tool in the War on Terror”.

In this light, Asymmetrica’s name appears to be a reference to the Asymmetrical Wafare strategies developed after 11 September 2001, and now being exported to Venezuela.

As Guaidó’s UK representative, Neumann’s proximity to people connected to the CIA and US armed forces is likely to raise eyebrows. Indeed, in 2017, Neumann toldthen-CIA director Mike Pompeo that “regime change [in Venezuela] looks to be – we hope – imminent or spiralling down”.

Curiously, Asymmetrica recently partnered with a California-based loan firm, offering loans to US-based businesses worth up to $5m. This seems to be quite a departure from typical ‘ambassadorial’ duties, particularly given these loans are offered exclusively to US companies. Neumann’s latest venture also raises questions regarding the collection of funds for the Venezuelan opposition, which has long been an issue clouded by murky waters.

Asymmetrica did not respond to a request for comment. Nor did Neumann.

The existence of a secretive Venezuela Reconstruction Unit within the FCO, combined with the FCO’s private discussions with Guaidó’s UK representative, seems to demonstrate the extent to which the UK government is committed to the overthrow of the Venezuelan government.

These documents also suggest that ‘regime change’ in Venezuela is following the typical procedure: the countries that contribute most during the destabilisation phase can expect to share the financial spoils in the ‘reconstruction’ phase.

This episode sits within a long line of UK support for right-wing forces in Latin America. 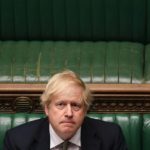 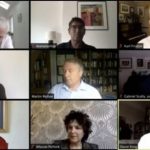 Independent SAGE Report | COVID-19: what are the options for the UK?Britain, COVID-19 Corona virus, Issues