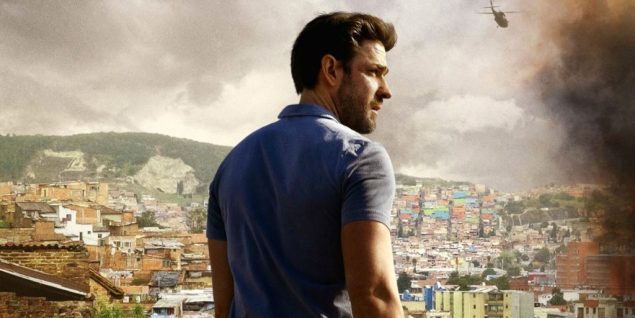 “No matter how cynical you might be about propagandistic American media, you are not prepared for how much watching this trailer is like snorting 100% pure John Bolton.”

A line from the trailer for  Jack Ryan, an Amazon TV drama whose second season streams on November 1, is: “A nuclear Venezuela…. You will not hear about it on the news, ’cause we’ll already be dead.”

The trailer implies that Venezuela is going through the “greatest humanitarian crisis in history” because it buys weapons from “the Russians.” Of course. “It would fit a pattern,” says the Jack Ryan character, a CIA operative played by John Krasinski, who’s better known as Jim Halpert, the likeable paper salesman in The Office. 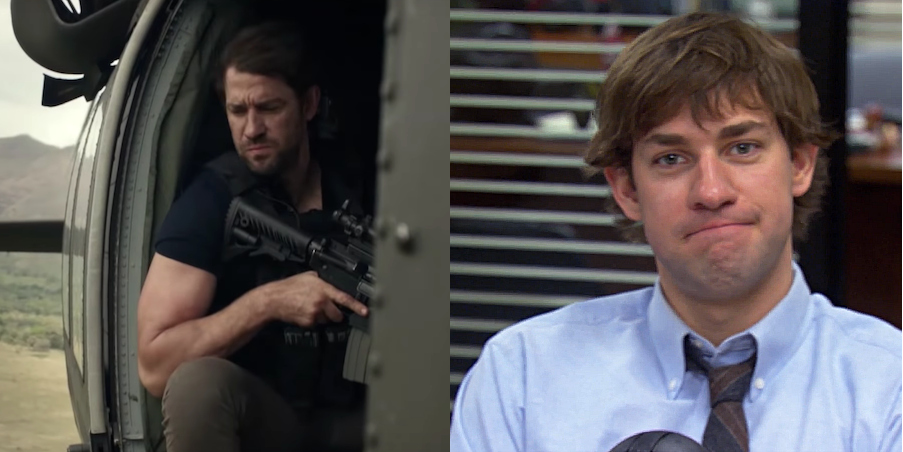 My favorite reaction to the premise of this upcoming Jack Ryan season came from US historian Gary Alexander:

No matter how cynical you might be about propagandistic American media, you are not prepared for how much watching this trailer is like snorting 100% pure John Bolton.

Common Dreams’ Eoin Higgins (9/5/19) put together a nice roundup of the outrage and ridicule the trailer provoked on Twitter from independent journalists and others based in the US: Abby Martin, Adam Johnson, Alex Rubinstein, Chase Madar and Sunjeev Berry.

Reuters (9/6/19) couldn’t find any US-based critics to quote about an Amazon show based around fictional Venezuelan WMDs.

That’s far from an exhaustive list, but Reuters “missed” all of it. The news wire published an article the next day (9/6/19) headlined, “Amazon‘s Jack Ryan TV Series Lambasted for Promoting Venezuela ‘Invasion.’” The article stated: 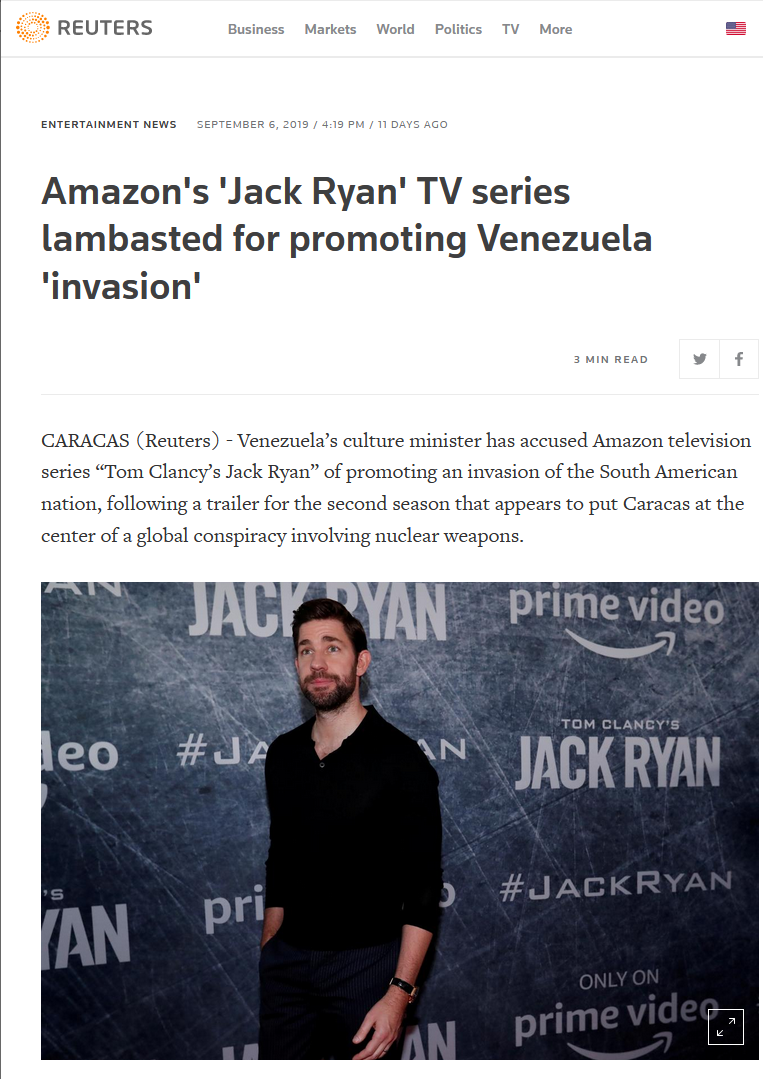 Villegas was the only person quoted or cited in the piece as a critic of the trailer. Are we to believe a Maduro government official is the only person Reuters could find on Twitter who “lambasted” the premise of the show?

action/adventure video game Mercenaries 2, released in 2008, was set in a fictionalized war-torn Venezuela. That fueled outrage among Venezuela’s ruling Socialist Party, who called it an apology for US-backed violence in the region.

Again, it’s apparently beyond Reuters to cite anti-war voices in the US who were disgusted by the game. Chuck Kaufman of the US-based Alliance for Global Justice said that the game was

capitalizing on negative and inaccurate US press stories about Venezuela and its leader, Hugo Chavez, in order to make a quick buck.  It’s another piece of anti-Venezuelan propaganda that serves only the US military, pure and simple.

Unlike Kaufman, Reuters predictably exonerated the corporate news media in its explanation of why murderous fantasies about Venezuela appeal to the US Entertainment industry:

The country’s socialist politics, rampant crime and open confrontation with the United States has made it attractive to the US entertainment industry.

Incidentally, Mathew Alford and Tom Secker in their book National Security Cinema insightfully analyzed how the entertainment industry is frequently co-opted by US military and intelligence services. So those are two UK-based writers for Reuters to ignore.

In covering the Jack Ryan trailer, Reuters also said nothing about Amazon’s lucrative CIA links (FAIR.org, 8/6/13). US anti-war activist (and FAIR associate) Norman Solomon wroteabout them in 2014, and asked, “In view of Amazon’s eagerness to dump the WikiLeaks site at the behest of US government officials, what else might the Amazon hierarchy be willing to do?”

Produce incredibly vile pro-war TV is one answer to Solomon’s question, but Reuters also does its part for empire on a regular basis. 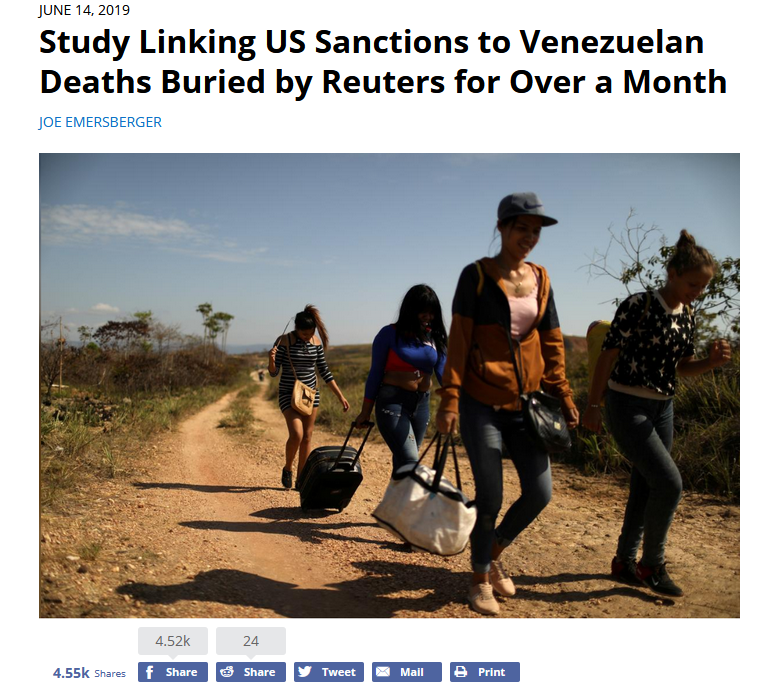 I’ve written before about how Reutersconsistently reports the murderous impact of US economic sanctions on Venezuela as a mere allegation by the Maduro government. For a month after US economists Mark Weisbrot and Jeffery Sachs published a study (CEPR, 4/25/19) linking US sanctions to tens of thousands of deaths, Reuters stuck with the “Maduro says” formulation, before finally mentioning the study in one article (6/9/19). Reuters has consistently reverted to the “Maduro says” approach since then—even the day after it finally mentioned the Weisbrot/Sachs study (Reuters, 6/10/19). In fact, the Jack Ryan article said “Maduro blames” Venezuela’s dire situation “on US sanctions that have hobbled the country’s oil industry.”

The “Maduro says” approach has made Reuters flirt with wild conspiracy theory at times. Last year a drone dropped bombs on a military parade where Maduro spoke. This year, Reuters(8/14/19) said the incident is one that Maduro “describes as an assassination attempt.”

This technique not only invisibilizes principled US-based dissent from Washington’s aggression, but also associates anti-war and anti-imperial views with governments it has helped Washington vilify. This is not limited to Venezuela.

For example, an article about John Bolton’s recent firing (Reuters, 9/11/19) says that “North Korea has denounced Bolton as a ‘war maniac’ and ‘human scum.’” Do you have to be a North Korean official to think Bolton, an architect of the Iraq War that killed at least 500,000 Iraqis, is a despicable person? Reuters couldn’t find a quote from peace activists in the US expressing revulsion towards Bolton?

RT America (9/6/19) did its own article about the Jack Ryan trailer, featuring several US anti-war voices—thereby showing that the US political culture, beyond the “mainstream” at least, is not the moral and intellectual wasteland you might think it is if you rely on sources like Reuters. Of course, if (aside from small independent media) the only place one can go to hear US critics of US propaganda is an outlet affiliated with another US enemy—Russia, RT’s sponsor—then the propaganda system wins either way.

Joe Emersberger is a writer based in Canada whose work has appeared in Telesur English, ZNet and CounterPunch.