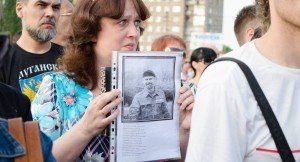 Relatives, fellow militia members and friends spoke at a microphone at the event, expressing their grief and condolences.

Mozgovoi was assassinated in an ambush on Saturday after he and four others drove onto a landmine and were then attacked by gunmen. Two civilians passing the ambush site in their cars were also killed by the gunmen. Investigators from the Lugansk People’s Republic have said that there are several suspected motives including local organized crime groups and a Ukrainian saboteur group.

“As a commander of the Prizrak Brigade, Alexei Mozgovoi several times said that he will mercilessly fight organized crime in Alchevsk, for which he received many threats from various criminal elements,” a source in the investigative group told Russian new agency Interfax on Saturday.

Denis Pushilin, a representative of the self-proclaimed Donetsk People’s Republic at the Minsk talks said that he believes that the murder was an attempt to destabilize the Lugansk republic.

“This was a calculated attempt to destabilize the situation from the inside. We all knew and witnessed Mozgovoi’s complicated relationship between the republic’s leadership. However, they always found a common language, and naturally, it would have been pointless to resort to any methods for such a solution,” Pushilin told RIA Novosti.

A mysterious pro-Kiev militia group called “Teni” (Shadows) took responsibility for the assassination, but provided a conflicting account of its actions. Although the group’s leader has been repeatedly featured in Ukrainian media, the group’s actual existence is unconfirmed.

A representative of the Ukrainian Presidentian Administration, Oleksandr Motuzyanik, claimed that the assassination was an issue of militias’ “internal strife.”

Read also:
A lengthy and detailed analysis of the murder of Aleksey Mozgovoy and the possible motives is written by Boris Rozhin and published on May 25 on his website, ‘Colonel Cassad’, here. 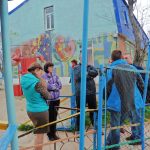