The following correspondence was received by us from an editorial colleague in Ukraine. It is in reply to an article appearing today on the website of the ‘Ukraine Solidarity Campaign’ in Britain which is headlined ‘Unions banned by pro-Russian separatists in Luhansk.

I just answered other people on this same issue. I see that the very document purporting to be an official document of the Luhansk Peoples Republic is a fake. It refers to laws never adopted in LPR. There are official websites of the LPR with its adopted laws and bills. Let those who accuse the LPR of ‘prohibition’ of unions refer to official sites, not to a computer scan!!! I can produce such scans in numbers and write whatever I want in them! I can’t find any other references to the law cited in the scanned (fake) document. 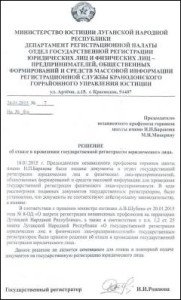 Purported document of ‘banning’ of unions in Luhansk

We saw the same thing last year in the case of a fake claim of a law ‘prohibiting homosexuality’ in the LPR. It quickly turned out that the story was a fake rumour, based on nothing! Meanwhile, in the real world, the rights of homosexuals in Kyiv’s Ukraine are very much threatened.

In this case, the suspicious scan is being spread by our so-called union ‘Zahyst pratsi‘. This registered union consists of five or six people in Kyiv, headed by Oleh Vernik. Like Left Opposition spokesperson Zakhar Popovich, Vernik is an old master at fraudulent fundraising and publicity schemes. See here, and here.

In this picture, Oleh Vernik is in the centre – the head of ‘Zahist pratsi‘ union

The answer should be clear – documents can be easily faked and they should not be trusted until and unless they are seen to be official, with reference to an official website. The only proper answer to such scans/scams is to place an emblem of the Ukrainian state upon them.

Concerning the accusation that Luhansk unions have been banned, the story accompanying the fake document refers to a ‘law’ of January 21, 2015 restricting unions. But here we have a February 2015 letter by the trade unions in Luhansk thanking the World Federation of Teachers Unions for its statement of February 3, 2015 opposing the Ukraine government’s gruesome war in eastern Ukraine. If unions have been banned in Luhansk, how could a union exist and issue statements, and how could a prestigious body such as the World Federation of Teachers become a silent accomplice? I think the answer is clear.

The only mention of this alleged banning of unions in Luhansk is on the website of Oleh Vernik’s union.

Here is the website of the Trade Union Federation of Luhansk.

Postscript, Feb. 25: A reply to this commentary above has been published on the pro-Maidan website ‘Ukraine Observer’ in the form of a Feb. 24 interview with Oleh Vernyk, Head of the All Ukrainian Independent Union Defense of Labour (Zakhyst Pratsi). The interview conflates an apparent administrative dispute in Luhansk over the registration of a trade union group with a claim by that union and its international supporters that this dispute signals that independent trade unions have been “banned” in Luhansk, including by specific laws to this effect. This is the source of the claim in the commentary above that the document making this claim is a “fake”. The document does seem to be a true record of a dispute; it’s just that some of the claims it makes are wrong, including reference to non-existent laws.

The first anniversary of the start of the civil war in UkraineBackground, Feature Articles, Ukraine 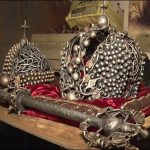 De-Sovietization by bombs, and the crown of the Russian EmpireBackground, Feature Articles, Halyna Mokrushyna, Ukraine