Our comrade, communist Andrei Sokolov, is already in his eighth month as a political prisoner of the Ukrainian junta. His trial continues. He is accused of “forming a terrorist organization” (art. 258-3 of the Ukrainian Criminal Code, 8 to 15). 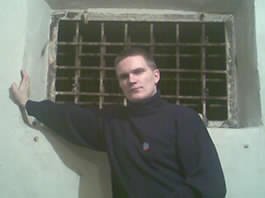 Court sessions are held with numerous violations. In the first two sessions, he was not even brought to the court. The trial took place by video conference from jail. Today, his case was transferred to the court in Berdyansk, Zaporozhye region, under Judge O.G. Pakhomenko. The city is on the Azov Sea, 60 km from Mariupol, where Andrei has been imprisoned. This phase will last about two weeks. The prisoner was not driven directly, but via Zaporozhye, in heat of 35 degrees Celsius (95 degrees Fahrenheit)! Even though he could be tried much closer.

Here’s what Andrei wrote about this court:

“The nature of the court hearing is preliminary, not on the merits of the case. At this meeting, the court will only decide, for example, whether there is any need for further investigation by the Security Service of Ukraine (SBU). Evidence was obtained in violation of the law (without witnesses, at an Anti-Terrorist Operation roadblock). There is not one prosecution witness (all are in the Donetsk People’s Republic, “so it is not possible to question them”). The indictment does not even list a place of detention [Andrei was detained at a checkpoint]. All that is identified is 29/12/14 in Mariupol, in the building of the SBU. This is already a basis for cancellation of the charges.”

Not only in court but also in the jail, inmates are hardly fed. The prisoners are beaten and tortured.

Andrei is a staunch communist, a revolutionary, an opponent of the Yeltsin and Putin regimes. In Russia, he spent a total of nine years in prison on political charges. At the same time, like a true leftist, from the beginning he strongly supported the uprising in the Donbass.

Last winter this self-taught engineer came to the DNR to help the country establish vital production. He stumbled into the checkpoint and was taken prisoner.

Please support Andrei and disseminate information about this trial.