BERLIN–A record 17,000 people have joined the latest in a string of demonstrations against Islam in Dresden, eastern Germany, celebrating the rise of their far-right populist movement by singing Christmas carols. The march on Monday night was organised by Patriotic Europeans Against Islamisation of the West – a group that has grown rapidly since its first protest in October. 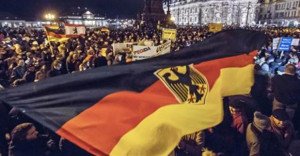 Politicians from all major parties have been stunned by the emergence of the right-wing nationalists who vent their anger against what they consider a broken immigration and asylum system.

About 4,500 counter-demonstrators marched through the city under the slogan “Dresden Nazi-free”, warning that there was no space for racism and xenophobia in the country that perpetrated the Holocaust.

Most Pegida followers insist they are not Nazis but patriots who worry about the “watering down” of their Christian-rooted culture and traditions. They often accuse mainstream political parties of betraying them and the media of lying. Braving cold and wet weather, they gathered outside the historic Semperoper concert hall for their pre-Christmas recital. Police put their numbers at about 17,500, up from the previous high of 15,000 a week earlier.

The management of the opera house signalled its distaste by turning the building’s lights off and flying flags outside that read: “Open your eyes”, “Open your hearts”, “Open doors” and “Human dignity is sacrosanct”, the first line of the national constitution.

Former German chancellor Gerhard Schroeder, of the centre-left Social Democrats, called for concerned citizens to launch a “rebellion of the decent” against the anti-foreigner movement, saying “that’s the kind of public reaction we need now”.

Pegida, born in a city that was part of communist East Germany until the fall of the Berlin Wall 25 years ago, has spawned copycat groups in western areas which have failed so far to attract similar crowds. Smaller clone groups rallied Monday in the western cities of Bonn, Kassel and Wuerzburg, but they only drew up to 200 followers each and were all vastly outnumbered by counter-demonstrations that drew 20,000 nationwide.

The biggest anti-Pegida march was held in the southern city of Munich, where at least 12,000 rallied under the banner “Make space – Refugees are welcome”.

The movement has emerged at a time when Germany, Europe’s biggest economy, has become the continent’s top destination for asylum seekers, and the world’s number two destination for migrants after the United States. The influx of refugees from Syria, Iraq, Afghanistan and several African and Balkan countries has strained local governments, which have scrambled to house the newcomers in old schools, office blocks and army barracks.

Chancellor Angela Merkel has cautioned Germans against falling prey to any form of xenophobic “rabble-rousing”, while other lawmakers have deplored the new “pin-striped Nazis”. 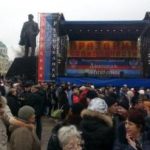