The ruble’s fall over recent weeks – apart from the odd scaremongering piece – has so far produced less of the overheated commentary that its similar fall did a year ago. This is probably because the widely anticipated collapse of the Russian economy following last year’s fall failed to materialise, making Western commentators more careful about their predictions this time round. 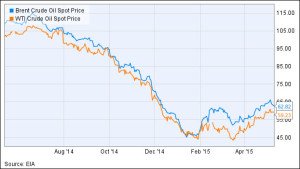 The ruble has fallen this year for the same reason it fell last year – because of the fall in oil prices.  This is connected to the fact that energy (oil and gas) is Russia’s biggest export.

According to the Russian Central Bank, Russian corporates have already assembled $135 billion in liquid assets.  The Central Bank estimates total debt repayments in the period September to December 2015 at just $35 billion, which is around half the debt payments that fell due in the same period last year. This year’s fall in the ruble should not, therefore, result in any significant debt payment difficulties for Russian corporates.

Unlike last year’s fall, this year’s ruble fall is unlikely to have a dramatic impact on inflation. Prices rose sharply in the first half of the year largely because last year’s ruble fall drove up import prices. Those price increases have now been factored in. There is no reason why they should increase further because the ruble is once again trading at the levels it reached in the winter.

Even if the ruble falls below those levels, it is unlikely it will cause prices to rise much more, if only because import volumes have fallen so much this year.

While the fall in inflation that was already becoming established may slow, it is unlikely to be reversed entirely. As of the time of writing, the weekly growth in prices has fallen to zero.

Provided the ruble falls in lockstep with the fall in the oil price, the Russian authorities have little cause for concern. On the contrary, as we have discussed many times, the ruble’s fall acts as a form of protectionism for domestic manufacturing and agriculture – precisely the two sectors whose growth the Russian government wants to encourage.

The ruble has so far fallen in lock-step with the oil price. Since May, the oil price has fallen by 28% and the ruble by 32%.  The slightly greater fall in the ruble is the result of a certain degree of overshooting, and possibly of extra downward pressure on the ruble – shared by other non-Western currencies – caused by rumours of pending increases in U.S. interest rates, which have been causing money to flow out of emerging market economies to the U.S.

The major uncertainty is how far oil will fall and for how long.

As I have discussed previously, the claim that last year’s oil price fall was the result of an anti-Russian plot agreed by John Kerry with the Saudis at a semi-secret meeting on 11th September 2014 is almost certainly wrong.  With the Saudis now busy investing $10 billion from their sovereign wealth fund in the Russian economy and some even talking (wrongly in my opinion) of a Russian-Saudi alliance, the theory of the oil price fall as an anti-Russian U.S.-Saudi plot is becoming increasingly untenable.

The key factor in causing last year’s oil price fall was the tightening of the previously excessively loose monetary policy of the U.S., which caused funds previously invested in oil-based securities to shift back to the dollar. The fall was then deepened – but not caused – by Saudi determination to maintain production at previous levels in order to shake out U.S. shale producers. Russia and the ruble were never the Saudis’ target but were caught in the crossfire.

As anyone who has studied the history of oil prices knows, attempts to predict their course is a mug’s game, with scarcely anyone at the start of 2014 predicting that oil would now be trading below $50 a barrel. A reasonable guess, however, is that despite certain heroic attempts to argue the contrary, a shakeout amongst U.S. shale producers cannot be long in coming if oil prices remain at their present levels, and that this will be accompanied by production cutbacks by other weaker producers once the usual period of stepped up production that follows a supply glut has run its course. At that point, oil prices should rebound, more than offsetting the effect of any additional production from Iran, which is anyway likely to increase only gradually.

Even if – contrary to my expectations – oil prices do not recover in the short to medium term, the Russian economy – and the ruble – will adjust to the lower prices, and are in fact already doing so.

Russia is itself a major consumer – as well as producer – of energy. A prolonged period of lower oil prices – and the cheaper ruble that would go with them – would benefit some of the more productive sectors of Russia’s economy once the period of adjustment in the country’s financial and budget system had been completed. These sectors would not only benefit directly from lower energy prices but from the increase in investment – previously focused on the energy sector – and the reduced competition from imports that the cheaper ruble would bring in its wake. The experience of 2015 shows this adjustment would be neither as difficult nor as protracted as is commonly supposed.

In time, oil prices will recover. What is happening in the meantime, with Russian corporates rapidly deleveraging on their foreign debt, a new interbank payment system, card system and ratings agency being created, and with the manufacturing and agricultural sectors of Russia’s economy being given time and space to build themselves up, means that when that recovery comes, Russia’s economy will be in a much stronger position to benefit from it than previously.

‘… Analysts fear that the sanctions could be extended indefinitely. The banks could withstand one or two years in the mode of severe restrictions, but a 10-year break in relations would lead to serious consequences. “A further extension of the sectoral sanctions will lead to the isolation of the banks. We will slowly come to a planned economy. It will no longer be a market,” TASS’s source from one of the top-30 banks said. According to the source, dependence of banks on the Central Bank and the state will grow as the sanctions are extended.’ 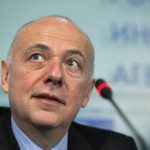 Andrei Kozyrev in the New York Times: On treason, defections and other ancient Russian traditionsDigest, Russia 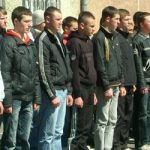 Ukrainians are voting with their feet against war and economic disasterDigest, Feature Articles, Roger Annis, Ukraine