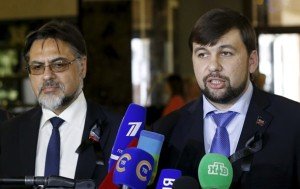 The leadership of the Lugansk People’s Republics and Donetsk People’s Republic have put their willingness to remain a part of Ukraine — albeit with greater autonomy — in writing. Korrespondent reports that representatives from the two republics, Vladislav Deynego and Denis Pushilin, have submitted proposed changes to the Ukrainian constitution which recognize Donbass as an autonomous region of Ukraine. The document states:

“The certain areas with special status or their associations are an integral part of Ukraine, and within the powers defined by the Constitution, special laws of Ukraine, as well as agreements on the delimitation of powers between these areas, their associations and the Cabinet of Ministers of Ukraine, the ministry, other central bodies of executive power settle the issues, carried to their authority, by themselves”

But Kiev won’t even consider the proposed changes. The Chairman of the Verkhovna Rada, Vladimir Groysman, declared that they would discuss constitutional changes only with “legally elected” representatives of Donbass.

There seems to be plenty of accusations coming from the US and Europe about how Russia is not “abiding” by the Minsk agreements. If the western-controlled government in Kiev refuses to even speak with the self-proclaimed republics — which are now open to compromise and reconciliation — then how will a real peace ever be achieved?

It’s clear what Kiev wants: Total submission from the rebel republics. In other words: It looks like more war.

Read also:
* Unian news agency in Ukraine reports additional text in the LPR and DPR proposal:
“Senior officials in charge of the executive branch on the territory of individual regions of Donetsk and Luhansk regions on the date of adoption of these amendments to the Constitution of Ukraine, shall continue to exercise their powers until the termination of powers in accordance with the procedure established by the acts of individual regions with special status in Donetsk and Luhansk regions” the text reads.

* Resignation of OSCE Ukraine mediator
Excerpt from a report by Bloomberg News, June 6, 2015:

Heidi Tagliavini, a Swiss diplomat who played a key role in negotiating a February cease-fire and peace deal, has decided to resign as special envoy of the Organization for Security and Cooperation in Europe, Switzerland’s Foreign Ministry said on June 6…

Rebel negotiator Denis Pushilin expressed concern Saturday at Tagliavini’s resignation. “I’m not very happy that Heidi is leaving us as we learned to work with her over this period, she listens to our arguments,” Pushilin said in an interview with Russian radio station Russkaya Sluzhba Novostei. “We expect an objective approach from her successor.”

Ukrainian ex-President Leonid Kuchma, who represents the government in Kiev at the peace talks, also said he regretted Tagliavini’s departure. He praised her “constructive” work, according to the Interfax news service.

Tagliavini, a Swiss diplomat fluent in Russian, served as the OSCE envoy to the Trilateral Contact Group that has brought together the Ukrainians, Russians and separatists. Known among other diplomats as “the facilitator,” she earned the trust of all sides, according to Russian, Ukrainian and separatist [sic] officials.

Reformatting Ukraine is on the agendaBackground, Ukraine 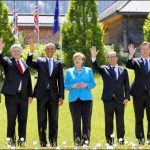 The G7 summit was a non-eventBackground, Ukraine