The Globe and Mail has published a commentary criticizing pianist Valentina Lisitsa. It was written by Globe arts reporter Kate Taylor and published online on April 7.

Reaction to Taylor by readers is swift and harsh. There are 220+ posted comments by readers, near-to unanimous in slamming her. Here are a few typical comments:

* Well the obligatory hit piece on Valentina Lisitsa didn’t take long. And Kate Taylor goes for it in the very first line — deeming Ms. Lisitsa a “loopy pianist”. So now having political views that differ from the officially sanctioned version make one “loopy.” This is exactly the same technique used by State media in the USSR when they called dissidents “crazy” and “mentally ill”, because after all, who other than a “loopy” or “crazy” person would dare challenge the official party line? Quite that telling the very same tactics used by a totalitarian state to silence dissent are now employed by the Canadian media. Plus ça change, plus c’est la même chose.

* To Kate Taylor … How does it feel to be a hired gun? Are you proud of yourself? I hope the 30 pieces of silver were worth it.

* “… she has compared the government in Kiev to the Nazis and has suggested sarcastically that it might set up extermination camps for ethnic Russians.”

For the second, before Ukraine had collapsed into civil war, the “Gas Princess” Yulia Tymoshenko was recorded cheerfully talking about ethnic-cleansing. With the atrocities of the subsequent conflict, there’s nothing surprising about a sarcastic reference to camps– particularly after seeing where ethnic-cleansing went in former Yugoslavia.

Shame on the TSO. Globe writer Kate Taylor sits in a comfortable pew, from which she might just have easily dissed a Jewish performer for disturbingly anti-Nazi personal views during the 1930s. After all, Canada from Prime Minister Mackenzie King down thought highly of Hitler. In his June 1937 visit to Germany, Mackenzie King recorded in his diary after meeting Hitler:

“He smiled very pleasantly, and indeed had a sort of appealing and affectionate look in his eyes. My sizing up of the man as I sat and talked with him was that he is really one who truly loves his fellow man and his country … his eyes impressed me most of all. There was a liquid quality about them which indicated keen perception and profound sympathy (calm, composed) – and one could see how particularly humble folk would come to have a profound love for the man.”

* So Kate Taylor feels that banning Lisitsa is a really good idea that simply could have been executed in a more discreet manner? So much for artistic integrity. 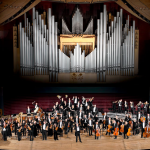