By Olga Luzanova, editor, Slavyangrad, published on May 2, 2015

Forty three people were reported dead officially by Kiev. According to the witnesses, and even some politicians, the real data concealed by the Ukrainian government reaches over 100 people burned alive and murdered, and two hundred forty-seven people injured on that day in Odessa. R.I.P.

A year ago, at night on May 2, I and my mother stayed awake almost the whole night watching live reports from Odessa. There were no journalists, either from state-owned or private TV channels; only videos once in a while recorded on mobile phones would appear on YouTube—all from different angles and varying distances. These were people themselves reporting from the ground, near the Trade Unions House. In every recording, there was nothing but horror: a real, deliberate massacre. That day became a crucial moment for many people, and for me personally.

Today the name Donbass is familiar to most, but not many of you knew about this small region of big Ukraine before the war there started—a region whose people are peaceful, hard-working and very tolerant. Coal mining has for decades been the main occupation of the inhabitants of the Donetsk and Lugansk regions, and many families used to earn their living from this industry. These people never used to protest or to demonstrate for or against anything—they used to work, taking care of their families. They are my people, and I am just like them.

For me and my peers, Donbass was Ukraine. I should mention, though, that we never really considered Russia to be another country, because it was no different. I went to Ukrainian school, where I studied both Russian and Ukrainian. The year I started studying was the last when pupils had Russian language instruction in the ten year school curriculum—the following generation had all the subjects taught in Ukrainian. Russian was officially proclaimed a “foreign language” in our schools. Still, we treated this change as a reasonable decision because it was the state language, and absolutely everybody could understand written and spoken Ukrainian perfectly well: we had foreign movies and cartoons dubbed into Ukrainian, shows and news on state TV channels, and newspapers and magazines in Ukrainian. However, Ukrainian was never a mother tongue or a language of everyday usage for the residents of the whole of eastern Ukraine. Moreover, the territory of former left-bank Ukraine [east of Kyiv and the Dnieper River[ has always in fact been inhabited by Russian-speakers (unlike former right-bank Ukraine, where you can encounter people speaking Ukrainian on the streets).

We do not choose our parents or our motherland. I am Ukrainian by citizenship, I was born in the Donbass just after the dissolution of the Soviet Union. Following that, the population was divided between 10 per cent who became very rich and 90 per cent who became very poor. I do not come from a rich family: my father was a mechanical worker, and my mother was unemployed until I began school. Life in the 1990s was really hard. Nevertheless, I do not remember my parents complaining about it: we learned to value good things (perhaps because they were rather rare). I remember my mother gathered raspberry and currant leaves and twigs to use for brewing tea: she explained, that such “tea” was more healthy than that from tea leaves, but in fact it was just that we had no money to buy normal tea. And yet, that raspberry leaf tea was the best tea in the world! As a child, I did not know that we were living in poverty, and that everybody else around us was as well—looking for a better future in the tomorrow of that just established state. Yes, independent Ukraine was a young country—a ship sailing through good and bad weather, trying to make its own way alongside other ships with more experienced crews abroad. Its attempts to be unique and self-determined were understandable. We tolerated the Ukrainisation of the population… Until the very last drop.

I used to love my Ukraine, I used to be proud of it: I know its history very well, its anthem, I know the meaning of its state symbols much better than many of those young “true Ukrainians”. If somebody had asked me in early autumn 2013 whether I would like the Donbass to be separated from Ukraine and joined to the Russian Federation, I would have certainly said “no”. Not because I disliked Russia, but, rather, but because I loved my Ukraine. It was never perfect, but we could bear it. Everything began to change on November 21, 2013. Eventually, it was Ukraine no more.

When Kiev activists started Maidan under the auspices of American-backed right-wing Western politicians, we remained silent—perhaps it would somehow end. When Right Sector ‘revolutionaries’ overthrew the President of Ukraine, legally elected in 2010, we remained silent—perhaps it would somehow get fixed. Then Maidan made a decision for us: to throw the entire Ukrainian state into western snare under the motto “Ukraine is Europe”. People’s obsession with this groundless idea only brought about aggression, impulsive madness and uncontrolled violence in society. This Ukrainian possession has become a mass hysteria, and Ukrainisation today does not mean “Ukraine is an independent state in its own right,” but, rather, “Ukraine is totally opposed to Russia”. As though under a spell, activists of the European integration movement repeat the same belligerent mottoes: “Glory to Ukraine! Glory to the Heroes! Death to the enemies!”, “Impale a Moskal!”, “Who does not jump is a Moskal!” and so forth. Let me to draw your attention to the fact that there was not yet the slightest hint about a referendum in Crimea—thus there was not the slightest reason to accuse Russia of interference in Ukrainian affairs, though such accusations already existed and were very popular among ‘true Ukrainians’.

Events took a new turn in April, 2014 when we began preparing the Great Victory Day celebration. Wearing St George’s ribbons several weeks before and after the holiday had been a tradition for many decades. We began pinning them to our clothes as usual. Normally, Ukrainians wore these ribbons as well, until they found for themselves “an old European symbol of the memory of WWII”—the poppy. Whether by coincidence or not, the colours of the poppy symbol match the red and black colours of the Right Sector’s flag. After all, Ukrainians associated our St George’s ribbon with a Colorado beetle (because of the stripes), and started to identify the people wearing these ribbons as “Colorados”. It is not just a black and orange piece of cloth, and we wear it not because it is beautiful, but rather because it is meaningful. My great grandfather was a veteran of the Great Patriotic War, and I still remember him very well.

Everyone in the Donbass has veterans in their family. This ribbon is a material part—a symbol of the triumph over fascism, which we can keep in our hands in the name of the contribution of our great-grandparents. Commemorating the veterans who won peace for us is a major part of the education of several generations. The majority of Ukrainian people have easily rejected their historical values in the name of European ones, and during the last year they have been trying to deprive us of our roots. We have become fed up with this. Nevertheless, in order to kill our memory they will have to kill all of us.

When the people of Crimea organised their referendum [March 2014], Kiev claimed it was fabricated. It began to use the label ‘vatnik’ (a quilted jacket, worn by soldiers in WW2). But according to ‘true Ukrainians’, the term meant a pro-Russian acting under the influence of a Kremlin agenda. Generally, Ukrainians are good at attaching labels—once you receive it you become a dangerous individual who threatens the safety of Ukraine, and thus you may even be killed. The Ukrainians will justify this because you were a ‘colorado’, a ‘vatnik’, a ‘separatist’, or the child of a ‘separatist’ or a parent of a future ‘separatist’. Such labels were quickly applied to the whole population of the Donbass.

In fact, the self-defense militia had begun seizing administrative buildings in the Donetsk and Lugansk regions before the Crimea held its referendum. It was peaceful and organised: the people who worked in those buildings were allowed to leave them with their possessions and with important documents; nobody was hurt or injured. All we wanted was to go through a legal process of separation from Ukraine, for a number of reasons, but firstly because we did not want to follow the path of integration with the European Union. By occupying the buildings, the locals made their protest against the junta regime. They had not elected them and they did not like its policy. Maidan activists had raised EU flags asserting their desire to join the EU; we did not support this idea, completely understanding that our living standards did not match those of the EU and that we would thus not be equal members. For “Ukraine is Europe”, the necessary condition was to sever all relations with Russia. The Donbass raised Russian flags over administrative buildings to assert that we did not want to separate from Russia. This divorce could have gone peacefully, but the ‘true Ukrainians’ wanted blood.

On May 2 in Odessa, the right-wing extremists committed a crime against humanity: they burnt people alive. This is a fact that nobody can deny, as the amount of pictorial and video evidence is so overwhelming. Watching the Odessa massacre, we could not imagine anything worse, but it appeared to be only the beginning. You could see girls with Ukrainian flags round their necks pouring petrol into bottles, which were certainly intended to be thrown at people (what else could be the purpose?), and that night the Ukrainian flag ceased to exist for me. It was so defiled by being used for carrying Molotov cocktails, but nobody judged this profanation at the governmental level. You could see young guys with Right Sector symbols on their sleeves finishing the people off who had managed to get out of the Trade Unions House which was enveloped in flames. These are not my people who call to kill other human beings, and who can triumph above the bodies of dead humans. They burned Ukraine in the Odessa Trade Unions House, they killed it together with young Kristina and her baby in Gorlovka, they downed it along with MH17, they ran it over together with eight year old Polina in Konstantinovka, they gunned it down along with Oles Buzina in Kiev.

Dear readers, please remember and honour your roots, and the deeds of your great-grandparents who made sacrifices for your Peace. It becomes easy to manipulate a population which is willing to forget its past, to rewrite its history, which is obsessed with revolution in the name of revolution. We stand for a better future in the name of our past. The moment of cleavage has happened. It is Donbass, it is Novorossiya. We will have our second Victory Day. 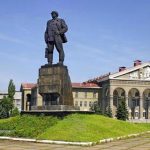 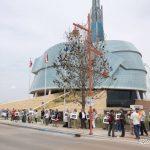