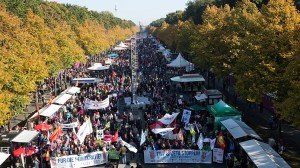 It was a day in Germany to remember, a date for the record books! October 10, 2015. It marked a surprising development in German politics! And who said Germans don’t like protest marches or demonstrations? The organizers counted 250,000, a quarter of a million. Of course the police scaled that down – to 150,000. But who’s counting – it was definitely the biggest since 2003 against the Iraq War. It was a protest against the “Transatlantic Trade and Investment Partnership”, TTIP, and its equally spurned Canadian sister, CETA. Like their US-Pacific clone TPP, both are to be shoved through the JA-vote mill, with little discussion of their contents, or even knowledge of them, after years of top-secret sessions with big biz experts and lobbyists.

The march organizers, two opposition parties, the LINKE (Left) and the Greens, Campac (CAMpaign-ACtion, something like MoveOn.org), Attac (against financial speculation),  almost 500 ecological, cultural, health and leftist groups of many colors and, of key importance, the union movement –  had hoped for 100,000. The media predicted only half that. But when I squeezed out of the jammed city train in Berlin’s main station, pushed through to the exit and looked down at the crowd I could guess at their mistake. It was so full, stretching across the bridges over the Spree River, that I gave up any hope of finding my own group and just mixed in with the happy, friendly crowd on this beautiful sunny day. 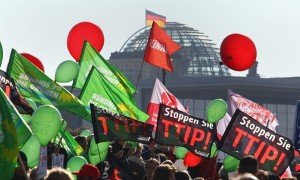 From parents with tots in strollers to ancient graybeards, also two blind women, with tens of thousands of banners and flags or occasional masks and puppets, they showed how varied were their backgrounds and home towns but how unified their will and determination. They joined in laughingly when the loudspeaker voice counted down to “4-3-2-1-“Stop T-TIP” or “T-TIP Nein!”. They listened to impassioned speeches from a Canadian union man warning how job-creating promises about NAFTA had turned out to be lies, then to a woman from Cameroun, who told how her country had been ruined by “free trade improvements,” and a Turkish woman reporting on the massacre a few hours earlier who called for solidarity. The immense crowd waited patiently, then  slowly moved off through one-time East Berlin thoroughfares, past the big Bundestag building and the Soviet War Memorial near Brandenburg Gate into the long wide avenue cutting through one-time West Berlin’s Tiergarten park, where one week earlier 25 years of German unification had been celebrated. Called for 12 noon, they were still arriving at 4.30 PM, while earlier arrivals chatted or danced. 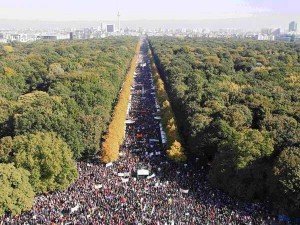 The crowds in Tiergarten this past Saturday were neither celebrating anniversaries nor cheering soccer goals on big screens, but were concerned with today’s pressing problems. TTIP and CETA  could force monopoly standards down unwilling throats, nullify European standards against cruel treatment of calves, hogs and chickens, end barriers to hormone-treated meat and genetic manipulation, drop labeling requirements, crush family farms, change European rules on pharma products which require them to prove their harmlessness before sales are permitted. Some protested planned cancelation of European rules protecting authors’ fees and national cinema culture against more powerful Hollywood pressures. A large number of signs protested the secret arbitration sessions which could meet the wishes of big corporations against any rules limiting their profits, overturning hard-won workers’ protection rules, ecological decisions or anything else in their way. I saw a sign depicting one such happy session with “arbitrators” – all three lobbyists with rat faces. Another told how most promised “advantages” would end up in big accounts in Swiss banks.

Among the speakers, heard by whichever parts of the parade were near sound boxes, was a top Green Party leader, LINKE co-president Bernd Riexinger and Reiner Hoffmann, president of the labor union federation (DGB) with its eight affiliates and about 6 million members. Five special trains and 600 buses had brought many of them in from all parts of Germany. The hometown signs many carried were not only from cities like Hamburg and Cologne but from small towns with unfamiliar names in all regions. I saw two fellows chatting, one from far-off Aachen near the Belgian border,  the other from Dresden close to the Czech border; I was glad to see at least one progressive from that city whose hate-ridden anti-foreigner parades are in so many news reports. I even saw a group from Alsace, across the border in France.

As for the political parties, there were Greens, especially their youth section, also small but determined groups with flags of the SPD, the Social Democratic Party, in defiance of their top leader, Vice-Chancellor Sigmar Gabriel, who carefully avoided this parade to give another of his speeches favoring TTIP. I even saw a handful waving a banner for “The Party”, a satirical group with crazily sarcastic slogans like “Privatize All Water”. Most of all I saw signs of the LINKE, the Left, though somehow TV reports on the parade carefully omitted showing even one of them. As usual!

Of great interest to me were sentiments often heard from the sound trucks and reflected in more than a few posters. One, more than clear, stated: “Take TTIP and shove it – and Capitalism with it!” Although this giant event included large contingents from the unions, not just leftist ones but even the conservative Building Workers or the Miners and Chemical Workers’ Union, the crowds seemed to happily accept or even cheer calls for a change of the system. It would be false to overestimate this, I am sure (and which people usually tend to take long trips to demonstrations?), yet it seemed to mark a renewed, rebellious and progressive trend.

New trends are sorely needed – because of other crowds. The tens of thousands of immigrants fleeing into Germany have evoked a dangerous counter-current which, increasingly aided by many media sources now again turning anti-foreigner, is displaying ominous, racist trends on its margins. Indeed, rightwing elements centered in the Bavarian sister party of the Christian Democrats are now even attacking hitherto untouchable Angela Merkel. A strange situation is developing: Merkel, though still stubborn in favor of TTIP and against leftist trends like in Greece, and after wavering back and forth on the immigrant question, has now stated defiantly that Germany cannot build a giant new wall, this time around its borders, but must courageously overcome the immense difficulties in integrating hundreds of thousands, while pressuring reluctant European Union partners to join in. Now, to general amazement, she is being supported by the opposition, the Greens, even the LINKE, while under attack from forces in her own party – with her Social Democrat coalition partner split.

Changes in the German political scene seem more and more in the offing. Fronts are changing, often hardening; no-one can predict which direction will gain the overhand. The giant demonstration on Saturday, with many signs saying “Immigrants Welcome!”, was moving evidence that events are not moving only in a rightward direction.

Photos from the huge demonstration in Berlin on October are online here.

Read also:
Hundreds of thousands protest trade deal with US in Berlin, RT.com, Oct 10, 2015 (with photos and video)

Last month, five key figures of the European left launched a new initiative “for a Plan B in Europe”. A statement was jointly published on September 11 by Oskar Lafontaine (former Die Linke (Left Party) leader in Germany), Stefano Fassina (Italian deputy and economist), Jean-Luc Melenchon (leader of France’s Left Party) and Zoe Kostantopoulou (former deputy and speaker of the Greek parliament) and Yanis Varoufakis (ex-finance minister of Greece).  Kostantopoulou and Varoufakis are former members of SYRIZA who resigned after the left-wing party accepted harsh austerity measures in July of this year. 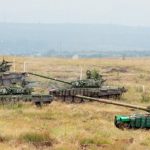 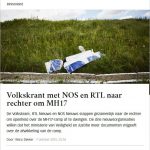