Munich, Germany–What a lot of theatrical activity during the last days — Merkel’s hasty trip to Kiev and Moscow (carrying Hollande as hand luggage), and then the appearances at the Munich “Security Conference” … truly a heroic effort to save peace? That at least is what we are expected to think. But how realistic is this idea? Is that possibly what she honestly wants?

Actually there are simple criteria to test her interest in peace — sober, technical criteria. 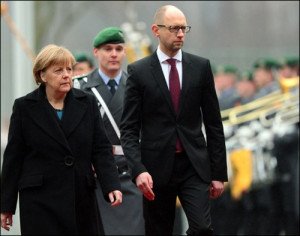 One can assume that all European governments, including Ms Merkel’s, are well informed about the real situation in the Donbass. In public they talk about the ‘evil separatists’, but they do know that the Ukrainian army shells the cities. They know the extent of destruction and they know who is responsible. Why? Because OSCE delivers this information daily to their desks. Publicly the OSCE acts as though it is not capable of calculating from the remains of a rocket stuck in the ground the direction from which it came. The reality is different. We can assume that all the atrocities committed by the Ukranian regime throughout the last months are well known. That includes the humanitarian situation in the Donbass.

That means, they know the consequences a closure of the Russian border would have under the present conditions — that it would not only cut off military supplies for the militias, but also any humanitarian support by Russia. They know that such a step would be impossible, and that any reasonable person could consider it only if the menace from the other side were to disappear. That it would require a completely different government in Kiev, also where it’s military power is concerned. Recently, a retired Russian General said it explicitly in an interview with the Süddeutsche Zeitung: “Don’t you Europeans understand that? Closing the border would mean the physical extermination of a significant part of the Donbass population.”

Did anything change? Did the position towards the Kiev junta change? You can listen to Merkel’s speech at the ‘Security Conference’ – no, there has been no change. Not by a single inch did she criticize the rulers of Kiev, never mind coming closer to any mention of the realities. Instead she explicitly repeated the demand that the border be closed . She still demands to that the Donbass become a Gaza Strip on speed.

But she is against arms deliveries to Kiev. Couldn’t that be considered some kind of peaceful intent?

Not at all. She gives some reasons why she doesn’t want to take that step. First: it doesn’t make sense. More weapons won’t enable the junta to win. That’s a point where — exceptionally — she is right. Second: she says quite clearly she would give preference to economic warfare. That’s an area where the German government is truly experienced and successful; several European neighbour countries can tell the tale. Anyone who wants to know a bit more about the effects of German economic warfare should watch the Greek documentary Agora (which was broadcast by the German channel WDR on 05.02). Third (and this is what she actually said): there isn’t sufficient control over public opinion. (One can try to imagine on his/her own what that means regarding our remaining democratic rights; months of uninterrupted propaganda don’t seem sufficient to Ms Merkel, she demands more).

The arguments she cites in calling for “peaceful” alternatives, seem to be purely decorative. The West, she says, won the Cold War through persistence and because if offered “more prosperity to those who made more of an effort”. Even Ms. Merkel should realize that those times are gone and the promises of prosperity have been museum ripe for some time already.

At this point we must consider the same probability as we faced regarding the conflict situation in the Donbass. Ms Merkel may tell a certain story. But she must know better. She knows about the gigantic black hole of fictional capital which which has been thrown at one country after the other. She knows what was done to the people of Greece, Portugal, Spain, Ireland and so on, in order to save the German banks. She was one of the people that arranged it. So she also knows that the attractiveness of the West is somewhat limited, to put it diplomatically. So these sentences are pure propaganda. It’s a game which cannot be repeated.

But if the idea, that she and her US allies could reach their goals by ‘peaceful means’ via a remake of the Cold War, is a fiction, and yet there seems to be no moving away from the goal of Russia’s submission, where is the difference between them and the USA? That is the one thing she didn’t spell out.

Now, let’s take a short diversion. Some believe this ‘Security Conference’ trip was caused by fear. Merkel and Hollande had suddenly realized that they would not escape unscathed in a real war against Russia. They would try now to save their own skins (and possibly even ours).

It wasn’t only the interview in the Süddeutsche. Sometimes one gets the impression that the Russian side tries to explain very slowly three times to intellectually challenged people of Berlin the effects of what they are actually doing at the moment. I would consider the interview with Fedorov in this context — a kind of tedious pedagogic effort. Could it be that Merkel saw this video and became deeply frightened, when she heard that in case of a Ukrainian attack against Russia “Washington and Berlin would be burned to ashes”?

Well, some decades ago someone, after meeting Merkel — at that time minister of enviromental issues — commented that she is not any more intelligent than her appearance suggests. But it would need someone incapable to count up to three not to understand that we are talking about a real and massive risk of a nuclear war. This risk has existed since the day of the coup in Kiev, and we have escaped it twice already — through the reunification of the Crimea with Russia, and through the uprising in the Donbass, which has up to now prevented an attack of the junta against the Crimea.

So even if this specific question more or less escaped public attention until today, and now suddenly becomes so acute that even Der Spiegel remembers it, the leading players in Germany must have realised this tiny problem right from the start. (And they should have been able to imagine what it might mean if creatures like members of the Right Sector gained access to nuclear weapons, which might have happened, had their access to the Crimea not been blocked so promptly).

So let’s go back to what Merkel didn’t spell out. She said Washington’s idea to deliver weapons would be foolish playing around without any practical use. She hinted at the possibility that ‘diplomatic efforts’ (the phrase used repeatedly for the same blackmailing) might be doomed to fail. She should know that the possibilities for economic warfare have far greater limitations than is apparent. So what is left? Sending troops?

In that connection, her remark about ‘hybrid warfare’ and her opinion that better control of public opinion is needed suddenly makes sense. For the installation of sanctions, the small amount of freedom of thought remaining outside of corporate media was not a menace. But the intention to send the residents of this country personally to the Front, to the war zone, that could cause greater resistence — the people might develop foolish ideas.

She wants to win time, in order to strangle any opposition, and then to act in whatever way she thinks is efficient. Which goes much further than the delivery of weapons. But for that she first needs a ceasefire…..somehow.

For months, Merkel and Obama seem to have been following a good cop/bad cop scenario. It looks about the same considering the Cease fire/Weapons delivery alternatives. But what guarantee is there that the one acting as the good cop is actually the good guy? Right, there is none.

For those who believe the German government is being forced into this position — any politician who has a bit of experience is capable of saying one thing and meaning the opposite. He/she understands the technique of pinning undesirable statements onto others; also, how to counter one coercion by another one that they might have set in scene themselves. At all these levels it is as if nothing had happened. They intend it like that. There is no reason at all to let them escape responsibility.

PS In the sense that Fedorov in this case may be something like a semi-official channel in the interview, the nasty attack that Elmar Brock made against Lavrov at the Munich conference might be considered a semi-official attack by Merkel. Brock is the political mouthpiece of Bertelsmann, Germany’s big media corporation, and Bertelsmann-owner Liz Mohn is Merkel’s close friend. No wonder that Lavrov nearly lost patience at that moment.

Dagmar Henn is a social services professional, she is a former member of the Munich City Council for Die Linke (“The Left'”), formed from a fusion of the former ruling party of the German People’s Republic, the Socialist Union Party, with a left-wing split from the Social Democratic Party. Her work is frequently published at the Oceania Saker in English in addition to her original work at the German Saker. 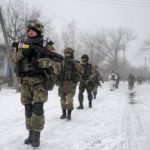 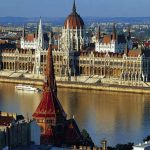