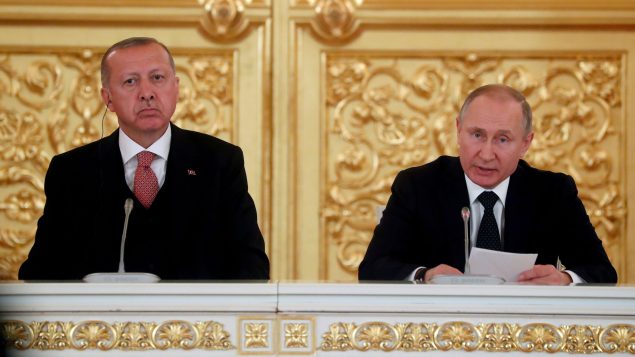 An overview from Al Monitor of what’s been happening in Turkey over the last week  – Putin is giving Erdoğan the empathy the Turkish leader isn’t getting from Washington.

By Just four days after Israeli Prime Minister Benjamin Netanyahu left Moscow, Turkish President Recep Tayyip Erdoğan arrived on April 9 for a full day of meetings with Russian President Vladimir Putin, leading to agreements to expand trade, tourism and energy cooperation as well as hints at deepening defense ties and discussions about next steps in Syria.

The US-Turkey “relationship is in such a bad state that the sides can’t even agree on what was discussed during recent high-level bilateral talks,” writes Semih Idiz. “This was the case following the meeting between Turkish Foreign Minister Mevlut Cavuşoğlu and Secretary of State Mike Pompeo in Washington on April 3,” which included some embarrassing public back and forth about what was discussed and agreed and what was not.

The Donald Trump administration was crystal clear, however, about Turkey’s intent to purchase the Russian S-400 air defense system. A Pentagon spokesperson said, “The S-400 is a threat to the F-35 program and the safety of our NATO allies.” The Defense Department nixed a Turkish offer to set up a bilateral working group to temper these concerns, as Jack Detsch reports. The chairs and ranking members of the Senate Armed Services and Foreign Relations Committees wrote in the New York Times that Turkey’s choice is either the US F-35 fighter jets or the S-400; in other words, Erdoğan can’t have it both ways. If the choice is the S-400, Turkey could even face sanctions under the Countering America’s Adversaries through Sanctions Act, they wrote.

At a NATO event in Brussels on April 3, referring to Turkey’s purchase of the S-400, US Vice President Mike Pence said, “Turkey must choose. … Does it want to remain a critical partner in the most successful military alliance in the history of the world, or does it want to risk the security of that partnership by making such reckless decisions that undermine our alliance?”

Erdoğan, speaking in Moscow, spurned US requests to rethink the Russian deal, saying, “Those who advise or ask us to scrap it most probably don’t know us. … It is a done deal for us.”

Putin couldn’t resist piling on, saying that he and Erdoğan discussed “other current and promising defense cooperation projects” beyond the S-400s, and Turkish Foreign Minister Mevlut Cavuşoğlu added that Turkey would even consider purchasing another S-400 system if the United States follows through on its threats.

And in the category of bad to worse for US-Turkey ties, US Sens. Roger Wicker (R-MS) and Ben Cardin (D-MD) introduced a bill to sanction Turkish officials unless Ankara frees two Turkish employees of the US Consulate in Istanbul and Turkish-American NASA physicist Serkan Gölge for their alleged involvement in the 2016 coup against Erdoğan, which the Turkish president blames on Fetullah Gülen, who resides in the United States, and his followers.

Also in Congress, Sens. Robert Menendez (D-NJ) and Marco Rubio (R-FL) introduced legislation that would lift the arms embargo on Cyprus and allow the United States to enter into energy cooperation agreements between Cyprus, Greece and Israel, which will all be poorly received in Ankara, as Bryant Harris reports.

In Moscow, Erdoğan compared the Syrian Democratic Forces (SDF), America’s Syrian Kurdish partner in the war against Islamic State, to the terror group, also called Daesh. “Just like DAESH was a great threat, the YPG/PYD is a threat of the same nature,” he said. “With the elimination of DAESH, similar organizations and threats must also be eliminated.”

The SDF is composed primarily of the People’s Protection Units (YPG), the gendarme of the Kurdish Democratic Union Party (PYD), which Turkey considers as one and the same with the Kurdistan Workers Party (PKK), which both Ankara and Washington have labeled a terrorist organization.

Erdoğan’s again revealing the chasm between Washington and Ankara reinforces Putin’s role as broker among Syria, the Kurds and Turkey. Like the Trump administration, the Russian president does not want a Turkish invasion of northeast Syria. Working out a resolution among the parties in northeast Syria is a heavy lift, but Putin continues to press the diplomatic action.

And while their conversations in Moscow on Idlib and Syria contained little new, with an agreement deferred for another day, Putin flashed another key card, saying that he and Erdoğan agreed to coordinate next steps in a political settlement in Syria according to UN Security Council Resolution 2254 and “in coordination with the Syrian government.”

Putin has been looking to rebuild the bridge from Ankara to Damascus, a trend we have covered in this column.

As with his mediation between Israel and Iran in Syria, Putin is hoping that Washington will begin to see him as the missing piece in US Syria policy, with the hope of some payback down the road in the form of sanctions relief.

“The talks have crystallized the two elements of Russia’s current approach to Turkey,” concludes Suchkov. “First, on most issues sensitive to Ankara, Moscow seeks to convey the type of empathy Erdoğan doesn’t encounter either with the United States or Europe. Second, the meeting was meant to look beyond the Syrian file to the bilateral relations. Putin’s remarks suggest he genuinely believes that both of the ongoing Syrian security problems — Idlib and the northeast — will be settled soon or later. The clock may be ticking for Syrian President Bashar al-Assad as he seeks to control all of Syria, but Turkey and especially Russia can afford to take their time. When this happens, however, Moscow and Ankara would need some other basis to rely on to keep the mechanism of the relationship functioning.”

“Erdoğan may well be betting it will all blow over in time,” adds Amberin Zaman, “as happened when the United States slapped an arms embargo on Turkey when it invaded northern Cyprus in 1974. By this reckoning, Turkey is too big a prize for the United States to let go of and that Erdoğan’s personal chemistry with President Donald Trump might be leveraged along with the latter’s affinity for Putin to save the day.”

There is also the question of how the AKP’s losses in the elections may affect Erdoğan’s calculations in Syria.

“By backing the opposition, the pro-Kurdish Peoples’ Democratic Party (HDP) used a surgical strategy in Turkey’s local elections March 31 to help defeat the ruling Justice and Development Party,” writes Fehim Taştekin. “Kurdish votes were the key to the AKP’s loss in many areas, including big metropolises such as Istanbul and the capital, Ankara, and other important centers such as Antalya, Mersin and Artvin.”

“The government’s propaganda that the opposition was collaborating with terrorists had little effect,” adds Kadri Gursel. “Failing to create a perception of threat, the government failed to convince its disgruntled voters to go to the polls and dissuade right-wing opposition voters from backing CHP candidates. Its narrative that the elections were ‘a matter of survival’ proved a flop.”

“It’s important to see what Erdoğan will learn from this situation,” Taştekin continues. “Will he opt to win over the Kurds who made him lose, or will he stick to his cooperation with the nationalist circles inside the Turkish bureaucracy and pursue his vengeance? Given his pragmatism and the economic crisis the country is facing, there are those who believe that Erdoğan is likely to be more conciliatory in foreign policy issues, and that he could opt to de-escalate tensions with the EU and the United States by softening his firm stand with Syria.”

“Yet renewed peace talks between Erdoğan’s government and the Kurds are still unlikely for two reasons,” Taştekin concludes. “First, to launch a new dialogue with the Kurds, Erdoğan would have to terminate his alliance with the [Nationalist Movement Party] and nationalist cliques inside Turkey. This front won’t allow him open up to Kurds. Second, Erdoğan has caused so much damage to the Kurds that nobody from their camp will easily extend a hand to him.”