Media bias in coverage of Ukraine

Public forum hosted by Solidarity with Antifascist Resistance in Ukraine

A meeting and discussion for supporters of Solidarity with Antifascist Resistance in Ukraine examining the bias in the media coverage of the crisis in Ukraine.

Neil Clark
Neil is a UK-based journalist, blogger and writer. He is a contributor to a wide range of UK and international publications. His blog was voted best UK blog in the 2007 Weblog Awards. He tweets at @NeilClark66 and @PublicOwnership.

Roger Annis (by Skype)
Roger is a frequent writer on Ukraine in such publications as Counterpunch, Truthout and Rabble.ca. He also publishes on The New Cold War: Ukraine and beyond, where he is the chief editor. July of 2014, he made a two-week reporting trip to Crimea and Moscow. In April 2015, he made a reporting trip to Donetsk, eastern Ukraine and to Moscow. He resides in Vancouver, Canada.

Andrey Bondarenko (by Skype)
Andrey is a Ukrainian left-wing journalist and editor living in Dnipropetrovsk.

Dmitriy Kovalevich (by Skype)
Dmitriy is the editor of Liva.com.ua and the go-to person on Facebook for information on Ukraine.

Giles Shorter
Giles is a member of Bristol SARU who have heroically protested outside BBC Bristol every Monday for over a year. 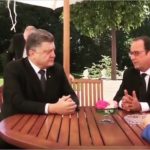 In Berlin, all sides in talks over Ukraine signal that ceasefire will holdDigest, Feature Articles, Ukraine