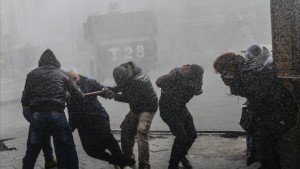 Turkish police have dispersed thousands of protesters in Diyarbakir, Turkey’s largest city of Kurdish people, who were demanding an end to curfews imposed nearly one month ago in cities and towns across the Kurdish region in the southeast of the country.

Police used tear gas and water cannons against demonstrators, some of  whom retaliated by throwing stones at riot control vehicles. (See a four-minute video of the confrontation here or by clicking the screen below.)

The rally against curfews on December 29 was organized by the Democratic Regions Party (DBP), the People’s Democratic Party (HDP), the Democratic Society Congress (DTK) and  Kurdish NGOs. Demonstrators gathered in Diyarbakir’s central Kosuyolu Park and then tried to march through the streets of the city’s Sur district, Turkish media report. Police blocked the protesters’ way and attacked the demonstration, deeming it illegal. 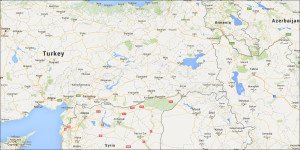 City of Diyabakir in eastern Turkey is near center of map

Meanwhile, in the southern Turkish city of Antalya, Turkish police clashed with Kurdish students of the Akdeniz University who had gathered to commemorate the victims of the government crackdown on Kurds back in 2011. At least eight people were arrested as a result of the scuffles.

The latest incidents came amid the ongoing Turkish army crackdown on Kurds in the country’s southeast. More than 200 Kurdish fighters from the outlawed Kurdistan Workers’ Party (PKK) have been killed in the operation during the past two weeks, according to Turkey’s military.  With more than 10,000 troops operating alongside tanks and armored vehicles in the region, Turkish forces have turned residential areas into piles of rubble in a six-month offensive against Kurdish militants.

The clashes between Turkish forces and PKK militants have been going on since July 2015. Turkey’s authorities claim that all those killed during the security operation in the southeast were PKK members. However, according to the Human Rights Watch, more than 100 civilians have been killed during the crackdown.

A two-year ceasefire between the Turkish government and Kurdish militants fell apart in July 2015, reigniting the three-decade conflict that has already claimed the lives of more than 40,000 people.

Some of Turkey’s biggest unions, DSIK and KESK, have called for strikes and protests on December 29 demanding that the government stop its crackdown in the country’s southeast.

With the clashes ongoing, a congress of Kurdish non-governmental organizations on December 27 approved a resolution calling for autonomy for Turkey’s southeastern regions via constitutional reform, calling it the only way for peaceful resolution of the Kurdish issue in Turkey.

Turkish President Recep Tayyip Erdogan has ruled out any possibility of what he called another state within the Turkish borders. On December 28, the public prosecutor’s office in Ankara opened a probe into the co-chair of the pro-Kurdish Peoples’ Democratic Party, Selahattin Demirtas, over his comments favouring  Kurdish self-rule that he voiced during the DTK congress. 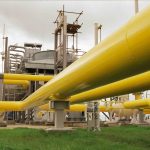 Dossier: The scramble to secure natural gas supply in Eurasia and the Middle EastBackground, Turkey / Türkiye