Protests in Iran: The international dimension and the view from the left 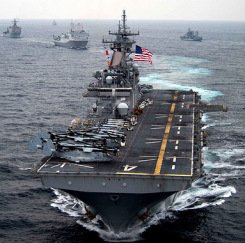 The US fifth fleet is 200 km from Iran

By John Riddell, Jan 19, 2018. Four articles on social protests in Iran published on January 2 and 9 in Socialist Project’s online blog, The Bullet, offer little on-the-spot news but raise major issues of political analysis that deserve attention. In particular, the articles do not link progressive struggles by worker and social movements within the country to issues raised by the external threats against Iran.

For the Bullet articles, see:

I have been a partisan of the national and social liberation process in Iran for half a century, but always from afar. I lack close knowledge of conditions in Iran and cannot judgment on workers’ and social struggles there. Still, I am concerned regarding the four Bullet articles’ treatment of external threats.

Some other significant recent articles on Iran are referenced below in the appendix to this post. Among them is a fifth article in Bullet: “The Iran Protests: A Third Path to Political Change,” posted on January 17. Its thrust is different from the first four; I comment on it briefly in appendix 2.

Danger from the Right

All four Bullet articles are supportive of anti-governmental protests in Iran but warn of the danger that they may be co-opted by rightist forces.

A lack of clarity on imperialist pressures

However, all of the texts, in different ways, downplay the grave threat to the Iranian people and nation posed by the U.S.-led imperialist alliance (in which Canada is fully engaged). Thus:

The threat against Iran

It’s useful to briefly review the nature of the warlike threats by the Western imperialist countries. Despite the international agreement in 2015 to normalize relations between Iran and the West, which resolved the main point under dispute between the two sides, the U.S. and Canada have maintained their sanctions against Iran. To the north and east of Iran in central Asia, the U.S. has been obliged to abandon its military bases, but U.S. armed forces continue to operate in Iraq and Afghanistan to Iran’s east and west and to bomb areas of Pakistan near Iran’s border. The seas to Iran’s south are heavily patrolled by the U.S. navy. U.S. and Israeli forces are aggressively armed with nuclear weapons and have drawn up plans to use them against Iran.

South of Iran, Saudi Arabia has been waging a brutal war against the people of Yemen with U.S. and UK backing and, more recently, with direct U.S. participation. The Saudi regime is trying, through embargo, to force Qatar to break relations with Iran. To the west, the NATO powers waged war against the Libyan state and succeeded in shattering it; there has been no recovery. The Israeli regime is increasingly brazen in locking Palestinians into limitless apartheid.

The Western sanctions against Iran have been in place for 39 years, ever since the 1979 revolution that toppled the pro-U.S. monarchy. The hostile actions against the Islamic Republic of Iran continue despite the absence of any significant issue in dispute between the two sides.

The statement by the International Alliance in Defense of Workers in Iran (“no progressive sides”) suggests a neutral stance in the conflict between imperialism and Iran. We must reject such a “third camp” position; against U.S.-led attacks, we stand with Iran. Yes, the Iranian regime has a lot to answer for. Yes, it could conceivably accept an offer from imperialism harmful to Iran’s interests, but at present it has not done so. The government’s refusal to bow to imperialist threats sets an example for other countries and peoples and creates political and economic space for the survival of other countries that also choose to assert their independence.

Araz Bağban’s warning against “abstract anti-imperialism” is linked to comments regarding Iran’s engagement in struggles in the region. So let us be more specific: What is this engagement?:

There is little cause for objection in the first three points. The key point here is Iran’s role in Syria, which is repugnant to many socialists. This deserves discussion. But whatever criticisms one may make of the foreign policy of the Islamic Republic of Iran, it is not Iran that has shredded peace and stability in the region but rather, above all, the U.S., Saudi Arabia, Israel, and their allies. Criticism of Tehran’s foreign policy is no reason to deny support to the nation of Iran against imperialist attacks.

Afary’s confidence that the protest movement will necessarily weaken imperialist pressure is contradicted by her report of “a strong nationalist tone to some of the slogans [in recent protests] such as ‘Neither Gaza, Nor Lebanon, I sacrifice my life for Iran.’” In criticizing such comments, Afary confirms that the protest movement’s attitude to imperialism is not pre-determined and will be defined by its political orientation. An openly anti-imperialist stance by protesters helps assure that their movement stands as an obstacle to Trump and his warmakers.

Alone among the four statements, that of the Tudeh Party calls for the overthrow (“open fight against the rule”) of the government of Iran. The statement does not say what Tudeh proposes in place of this government. Its phrasing could be interpreted as a call for insurrection. Yet the recent protests, for all their promise, were relatively small in size, lacking in cohesion, and unclear in program; they provide no mandate for overthrowing the Islamic Republic.

Indeed, the Tudeh statement appears to concede this point by simultaneously explaining that the task of socialists is to patiently explain their views to the protest movement to avoid it being “hijacked by a bunch of reactionary opportunists.”

Frieda Afary delivers a cogent warning on this point with reference to experience elsewhere in the region: “For those Iranians opposed to all these actors and genuinely hoping for a liberatory movement, it is extremely important to learn from the lessons of the Syrian revolution.” She could also have pointed to Libya, Egypt, Yemen, or Ukraine. In all five cases insurrectional movements ended in either a rightist pro-imperialist consolidation, imperialist intervention, the state’s collapse into murderous anarchy, or all of the above.

What is missing from all four statements is a recognition that, while Iranian workers and capitalists are contending for influence in the Iranian state, there is a third force at work: U.S.-led imperialism. Scores of nations around the world suffer from imperialist domination. For socialists, the strategic remedy is well known and has often been tested: strive for social justice and democracy while simultaneously standing firm against the foreign oppressor. In line with this concept, anti-imperialism in Iran has nothing to do with support of the regime in Tehran and is a necessary component of a working-class program.

This insight is missing from the four Bullet articles. True, there is some criticism of U.S. sanctions and threats, but these passages are disconnected from the process in Iran. They fail to explain that the people in countries in the West have an urgent obligation to build an international solidarity movement with Iran. There are warnings against a right-wing takeover in Iran, but the external point of support of this threat is not identified. Missing is a vital strategic principle: working-class struggle in Iran needs to be fused with resistance to imperialist attacks on Iran and the entire region.

Notably absent from the four articles is any mention of the Iranian revolution of 1979, which was inspired by goals of national independence and social justice (see appendix 3). It shattered the pro-U.S. monarchical dictatorship, ended a quarter-century of effective U.S. trusteeship over the country, and established Iranian national sovereignty.

A few months later, the Islamic Republic was approved by overwhelming vote in a popular referendum. In the years that followed, a partial counterrevolution unfolded in which repressive capitalist rule was firmly established. The 39 years of U.S. hostility to Iran has nothing to do with Islam or Iran’s form of government—it is founded in U.S. hatred of the Iranian masses for daring to rise up and overthrow a U.S. client regime.

The various spurious charges during the past 39 years (“rogue state,” “axis of evil,” “revisionist,” “terrorist,” “nuclear weapons,” etc.) and the uproar over Iran’s nuclear energy program all speak to the fact that, however much the Iranian government may desire an accommodation with the West, the spirit of 1979 is still alive among the Iranian people.

The goal of Washington and its allies from the start has been to reverse the Iranian revolution and bring the country back into compliance as a subordinate unit of the imperialist world system. The regime in Tehran is already applying aspects of imperialism’s favoured neoliberal policy in the form of austerity. That is what triggered the recent protests. U.S. policy does not exclude an accommodation with Tehran, but does seek to extirpate the remaining legacy of 1979 by dealing devastating blows to Iranian sovereignty and the livelihood of working class people in the cities and countryside.

The authors in The Bullet are right to argue for a progressive vision of Iran’s future, as opposed to reactionary and monarchist alternatives. But such a progressive vision needs to encompass explicitly upholding Iranian sovereignty against imperialism. All the world’s people have a stake in upholding this principle.

The Bullet articles do not address Canada’s policy on Iran. Yet Canadian policy is the link through which all of us in Canada are tied to the struggle over Iran’s future.

Canada maintains a formidable list of prohibitions against various forms of economic relations with Iran. Such punishment contrasts with the Canadian government’s unyielding approval of arms sales to warlike Saudi Arabia. Sanctions against Iran should be opposed in their totality, and this issue should be encompassed in any collective expression of support for the Iranian people. Pressure to end the reprisals and war drive against Iran offer the best way for us in Canada to help Iranian people in their efforts to achieve social justice.