The New York Times continues its sorry pattern of falsifying the record on Russia-gate, giving its readers information that the newspaper knows not to be true, reports Robert Parry.

If Russia-gate is the massive scandal that we are told it is by so many Important People — across the U.S. mainstream media and the political world — why do its proponents have to resort to lies and exaggerations to maintain the pillars supporting the narrative?

A new example on Thursday was The New York Times’ statement that a Russian agency “spent $100,000 on [Facebook’s] platform to influence the United States presidential election last year” – when the Times knows that statement is not true. 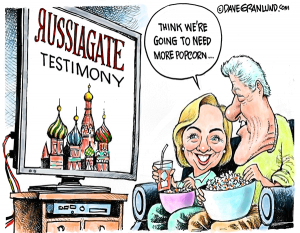 According to Facebook, only 44 per cent of that amount appeared before the U.S. presidential election in 2016 (i.e., $44,000) and few of those ads addressed the actual election. And, we know that the Times is aware of the truth because it was acknowledged in a Times article in early October.

As part of that article, Times correspondents Mike Isaac and Scott Shane reported that the ads also covered a wide range of other topics: “There was even a Facebook group for animal lovers with memes of adorable puppies that spread across the site with the help of paid ads.”

As nefarious as the Times may think it is for Russians to promote a Facebook page about “adorable puppies,” the absurdity of that concern – and the dishonesty of the Times then “forgetting” what it itself reported just two months ago about the timing and contents of these “Russian-linked ads” – tells you a great deal about Russia-gate.

On Thursday, the Times chose to distort what it already knew to be true presumably because it didn’t want to make the $100,000 ad purchases (which is not a particularly large sum) look even smaller and less significant by acknowledging the pre-election total was less than half that modest amount – and even that total had little to do with the election.

Why would the Times lie? Because to tell the truth would undercut the narrative of evil Russians defeating Hillary Clinton and putting Donald Trump in the White House – the core narrative of Russia-gate.

Another relevant fact is that Facebook failed to find any “Russian-linked” ads during its first two searches and only detected the $100,000 after a personal visit from Sen. Mark Warner, D-Virginia, the vice chairman of the Senate Intelligence Committee and a leading legislator on Internet regulation.

In other words, Facebook’s corporate executives dredged up something to appease Warner. That way, Warner and the Democrats could blame Russia for the Trump presidency, sparing further criticism of Clinton’s dreadful campaign (in which she labeled half of Trump’s voters “deplorables”) and her neo-liberal economic policies (and neo-conservative foreign policies) that have alienated much of America’s working class as well as many progressives.

The Times also might have put the $100,000 in “Russian-linked” ads over a two-year period in the context of Facebook’s $27 billion in annual revenue, but the Times didn’t do that – apparently because it would make even the full $100,000 look like a pittance.

Trimming the total down to $44,000 and admitting that only a few of those ads actually dealt with Clinton and Trump would be even worse for the Russia-gate narrative.

Ironically, the Times’ latest false depiction of the $100,000 in ads as designed “to influence” the 2016 election appeared in an article about Facebook determining that other Russian-linked ads, which supposedly had a powerful effect on Great Britain’s Brexit vote, totaled just three ads at the cost of 97 cents. (That is not a misprint.)

According to Facebook, the three ads, which focused on immigration, were viewed some 200 times by Britons over four days in May 2016. Of course, the response from British parliamentarians who wanted to blame the Brexit vote on Moscow was to assert that Facebook must have missed something. It couldn’t be that many Britons had lost faith in the promise of the European Union for their own reasons.

We have seen a similar pattern with allegations about Russian interference in German and French elections, with the initial accusations being widely touted but not so much the later conclusions by serious investigations knocking down the claims. [See, for instance, Consortiumnews.com’s ‘German intel clears Russia on interference‘]

The only acceptable conclusion, it seems, is “Russia guilty!”

These days in Official Washington, it has become almost forbidden to ask for actual evidence that would prove the original claim that Russia “hacked” Democratic emails, even though the accusation came from what President Obama’s Director of National Intelligence James Clapper acknowledged were “hand-picked” analysts from the CIA, FBI and National Security Agency.

These “hand-picked” analysts produced the evidence-lite January 6, 2017 “assessment” about Russia “hacking” the emails and slipping them to WikiLeaks – a scenario denied by both WikiLeaks and Russia.

When that “assessment” was released almost a year ago, even the Times’ Scott Shane noticed the lack of proof, writing: “What is missing from the [the Jan. 6] public report is what many Americans most eagerly anticipated: hard evidence to back up the agencies’ claims that the Russian government engineered the election attack. … Instead, the message from the agencies essentially amounts to ‘trust us.’”

But the Times soon “forgot” what Shane had inconveniently noted and began reporting the Russian “hacking” as accepted wisdom.

Whenever scattered expressions of skepticism arose from a few analysts or non-mainstream media, the doubts were beaten back by the claim that “all 17 U.S. intelligence agencies” concurred in the conclusion that Russian President Vladimir Putin had ordered the hacking to hurt Hillary Clinton and help Donald Trump. And what kind of nut would doubt the collective judgment of all 17 U.S. intelligence agencies!

Though the 17-agency canard was never true, it served an important purpose in establishing the Russia-gate groupthink. Wielding the “all 17 intelligence agencies” club, the U.S. mainstream media pounded politicians and policymakers into line, making any remaining skeptics seem more out of step and crazy.

So, in May 2017, when Clapper (along with former CIA Director John Brennan) admitted in congressional testimony that it wasn’t true that all 17 agencies concurred in the Russian hacking conclusion, those statements received very little attention in the mainstream media.

The New York Times among other major news outlets just continued asserting the 17-agency falsehood until the Times was finally pressured to correct its lie in late June, but that only led to the Times shifting to slightly different but still misleading wording, citing a “consensus” among the intelligence agencies without mentioning a number or by simply stating the unproven hacking claim as flat fact.

Even efforts to test the Russian-hack claims through science were ignored or ridiculed. When former NSA technical director William Binney conducted experiments that showed that the known download speed of one batch of DNC emails could not have occurred over the Internet but matched what was possible for a USB-connected thumb drive — an indication that a Democratic insider likely downloaded the emails and thus that there was no “hack” — Binney was mocked as a “conspiracy theorist.”

Even with the new disclosures about deep-seated anti-Trump bias in text messages exchanged between two senior FBI officials who played important early roles in the Russia-gate investigation, there is no indication that Official Washington is willing to go back to the beginning and see how the Russia-gate story might have been deceptively spun.

In a recently released Aug. 15, 2016 text message from Peter Strzok, a senior FBI counterintelligence official, to his reputed lover, senior FBI lawyer Lisa Page, Strzok referenced an apparent plan to keep Trump from getting elected before suggesting the need for “an insurance policy” just in case he did. A serious investigation into Russia-gate might want to know what these senior FBI officials had in mind.

But the Times and other big promoters of Russia-gate continue to dismiss doubters as delusional or as covering up for Russia and/or Trump. By this point – more than a year into this investigation – too many Important People have bought into the Russia-gate narrative to consider the possibility that there may be little or nothing there, or even worse, that it is the “insurance policy” that Strzok envisioned.

The journalism at Consortium News is made possible through donations from readers. Contributions go directly to support the production, editing, and dissemination of original journalism. Consortium News does not receive corporate/government sponsorships and does not sell advertisements. It holds three fund drives each year.

When you donate to Consortium News, you are investing in ethical journalism. Contributions from readers provide compensation to contributing writers for original works of journalism and to fact-checking and editorial work. Consortium News‘ articles are frequently circulated to other independent news websites, bolstering the availability of strong, journalistically-sound content across the internet.

Consortium News is a 501(c)(3) nonprofit and donations by U.S. taxpayers are fully tax-deductible to the extent of the law. To donate, click here: