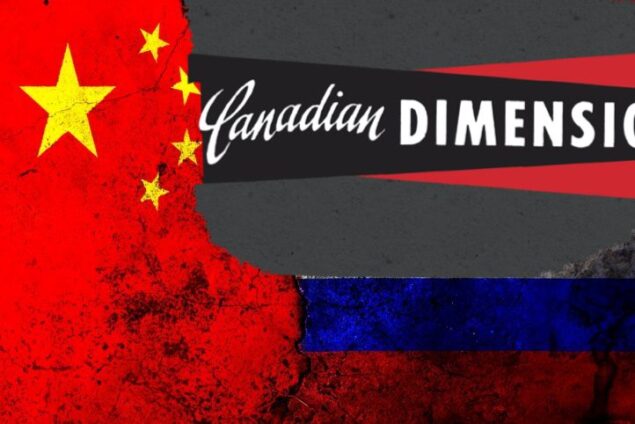 Three Canadian writers have resigned from the editorial board of Canadian Dimension, a respected left journal established in 1963, citing its coverage of Russia’s recent election and of the Canadian parliament’s vote to convict the China Government of ‘genocide’.

Click hear to read The Case of Alexei Navalny: Reviving the Cold War –the article by John Ryan that Canadian Dimension would not publish.

Three Canadian writers have resigned from the editorial board of Canadian Dimension (CD), a respected left journal established in 1963, citing its coverage of Russia’s recent election and of the Canadian parliament’s vote to convict the China Government of ‘genocide’.

When the US and its allies are on a dangerous offensive, CD has aligned itself on only one side of two key debates,’ they state in a letter to CD’s editor, reproduced below. ‘The “About” page on its website states that “For more than half-a-century, CD has provided a forum for lively and radical debate” and that it is “an independent forum for left-wing political thought and discussion.” In rejecting legitimate pieces on two key issues sorely in need of debate and discussion, the board has opted to cease implementing this stated policy.’

‘History amply demonstrates that the U.S. government and its allies routinely disseminate misinformation about the West’s official enemies in order to generate public support for a bellicose and militaristic foreign policy,’ said Dimitri Lascaris. ‘Given the extraordinary risks to humanity of military conflict between nuclear-armed states, it is vital that independent journalists maintain a healthy level of scepticism when evaluating U.S. government allegations about human rights abuses by the West’s official enemies.’

‘We deeply regret this outcome,’ said Radhika Desai, who co-edits the www.newcoldwar.org news and analysis blog with Alan Freeman, ‘’CD’s pioneering role in Canadian left publishing attracted us to join the board, which we regarded as an honour. We hope those who remain will reflect and reconsider their course. Meantime, we cannot be party to the suppression of legitimate critiques of the Government and the Mainstream, to which the Left and the Canadian public sorely needs access.’

‘Canada is suffering a damaging and worsening information deficit,’ said Alan Freeman. ‘Our work brings us in touch with an extensive world network of journalists and scholars, who are rarely heard in Canada. We will work with alternative outlets to give Canadians access to the voices that their own Government and Media are suppressing.’

The letter of resignation, which was addressed to Canadian Dimension’s founding editor Cy Gonick, can be read here:

With great regret, we write to tell you that we are leaving the editorial board of Canadian Dimension.

When the US and its allies are on a great and dangerous offensive, CD has aligned itself on only one side of two key debates: around Navalny and the Russian election, and around the Canadian parliament’s decision to brand China’s government as a genocidal regime. Having published, without discussion, an article voicing support for Navalny, an anti-immigrant racist, CD refused to publish John Ryan’s piece raising serious and legitimate questions about the Western narrative surrounding Navalny and his alleged poisoning by the Russian state. It further failed to re-post, despite agreement to do so, a Grayzone piece powerfully and legitimately exposing the leading proponents of the genocide allegation against China.

The journal has thus broken with its stated mission. The ‘About’ page on its website states that “For more than half-a-century, CD has provided a forum for lively and radical debate” and that it is “an independent forum for left-wing political thought and discussion – including just about the entire range of what passes for the left in Canada”. In rejecting legitimate pieces on two key issues sorely in need of debate and discussion on the Canadian Left, the board has opted to cease implementing this stated policy.

Its working practices rule out the possibility of correcting this defect in the foreseeable future. This could easily be done; the board need only act on its published guidelines by opening up its differences to the public. Instead, the bulk of submissions go through on the nod without informing us, whilst submissions that are opposed by a minority of the board are filibustered out of publication on allegedly technical grounds which, it is now clear to us, are simply excuses for refusing to publish any view this minority disagrees with. The decisions of the last board meeting, which simply formalize these practices, give us no reason to suppose any change can be expected.

Our objection is not to anything CD has published, but to its suppression of important currents on the left. We have never opposed, and will not oppose, publishing articles consistent with the mainstream left narratives about the West’s official enemies; we ask only that the board gives its readers access to articles that rigorously critique those narratives. After a long and honourable life in Canadian politics, CD faces a choice. Will it live by its avowed purpose by offering its readers a diversity of views and letting them make up their own minds? Or will it transform itself into the journal of a single, sectarian viewpoint on the key issues now facing Canada.

We fear that, with the decisions at the last meeting, CD may well be embarked on the latter course, a course to irrelevance. Certainly, with the suppression of the Ryan and Grayzone pieces we are unable to justify our continuing presence on its editorial board, either to our consciences, or to the Canadian Left.

The authors of this letter can be contacted at: