Who prevented the coup in Turkey and who hit the streets?

There has been a claim making the rounds among government supporters and some sections of the opposition since the momentous events of 15 July: “The attempted coup of 15 July was stopped by the people exercising their right to resistance for democracy.” 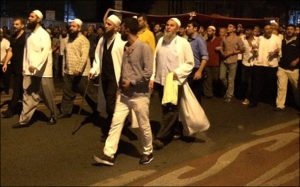 Crowd of supporters of the Turkish president protesting military coup on July 15, 2016 (photo on Sendika

This coup attempt was destined to failure because it failed to secure support from the United States and the European Union, proceeded without support from the General Staff and was conducted with such poor planning that it failed to exercise even a minimum amount of control over the tools of communication.

Given that Turkey’s is a NATO army, it is well-nigh impossible for the army to conduct a successful coup against the wishes of the US and EU (that is, NATO) and the top military brass.

The civilians that hit the streets against the stillborn coup were not engaged in resistance against putschists but fought as reinforcements for the police in a battle between two elements of the government, while being deployed to the front as a shield or a canary in the mines – taking their share of the bullets in the process in certain areas.

It is also important to note that a portion of these “civilians” drawn from the ranks of the supporters of President Recep Tayyip Erdoğan and the Justice and Development Party (AKP) were members of Islamist organizations close to the government that have sprouted with the wars in Syria and Iraq, as well as members of religious brotherhoods (tariqat).

Moreover, despite the direct calls of the government, the religious exploitation of mosques by the Religious Affairs Directorate (Diyanet) in mobilizing for the government, and the armed protection of the police, the crowds that hit the street were negligible in terms of their numbers and ability to resist. In comparison to the participants in the Gezi Park uprising, a barometer as far as the AKP is concerned, it wasn’t even in the same league.

According to the state’s own estimates, millions of people poured onto the streets during the Gezi Resistance – drawing merely on the people’s own resources in spite of oppressive state terror. Even with the most generous estimate, no more than several hundred thousand people hit the streets on the night of 15 July, even though the government, police services, Diyanet and municipalities offered all manners of encouragement, protection and support to the mobilization.

Who was on the streets of Istanbul?

We had a chance to observe the crowds on the streets from Harbiye to Taksim and from Saraçhane to the Istanbul Police Station on Vatan Avenue on the night of 15 July. On display were crowds marked by religious attire that displayed a discipline that was evident from their marching to their slogans but who were limited in number. Many in the crowds conspicuously lacked experience in mass resistance, and many appeared uncomfortable, timid and awkward in the situation.

The crowds dispersed when the clashes intensified and could only reassemble when security was re-established. The “militancy” of such crowds was confined to places in which soldiers surrendered, weapons were not fired and tanks did not roll. Such “militancy” also showcased itself in the form of lynching conscripts who had surrendered, slitting their throats and posing for pictures on the top of tanks after the danger had passed.

This crowd, which was carelessly described as “resistors for democracy” by the ruling and opposition parties during a General Assembly in parliament on 16 July, consisted of a fascist mass that sees no problem in the anti-democratic nature of the government even as it defended it against an anti-democratic coup attempt, featured not anti-coup protesters but fanatical AKP supporters and shouted slogans in favor of sharia and the return of capital punishment instead of democracy.

This crowd was one that would not insist on fighting a fight it knew it would lose, but easily descended into barbarism when victory was assured, holding a knife to the throat of those surrendering.

Who defended the Istanbul Police Station?

When we approached the Istanbul Police Station on Vatan toward 02.30 in the night, we observed that it was not police cars that had blocked the way but municipal vehicles. In a number of areas, municipalities were sending more work vehicles to form barricades than the police.

Men with religious attire were very prominent amid the crowd waiting in front of the station. Agitators continually sought to convince the crowd to stay, saying, “Our only armed force is the police; don’t leave – this is where we are for today.” Accompanying the calls of the agitators were shouts of “death to the putschist officers.” In tandem with unceasing calls from the mosques, the crowds in religious attire marched in a disciplined cortege toward the police station. The extent of the AKP’s celebration of democracy was to shout slogans in favor of shariah law against a coup that had already been doomed to failure!

Until it became clear that the coup attempt would not succeed, the civilians on the street displayed hesitation, while the police presence was below expectations. The putschist soldiers were demobilized and forced to surrender not so much because of determined resistance but because potential supporters, especially the military brass of the Turkish Armed Forces, left the insurgents isolated.

It is of critical importance to note the hesitant reaction of the police and the crowd in the face of the coup attempt from the AKP’s perspective. It should come as a surprise to no one if the police are targeted in operations in the near future. As for the crowds, they are gaining courage from stories of cheap heroism that were made possible by the defeat of the enemy.

The Erdoğan-AKP supporters that hit the street on 15 July are being held up as role models for the entire AKP grassroots with exaggerated suggestions that they displayed resistance for democracy. Leaving aside the overt images of barbarism and lynchings, most of the images published in the media purporting to show “massive resistance for democracy” were staged. We witnessed one of these staged scenes during the night in an almost empty Taksim Square.

“Soldiers shot at the ground, and one bullet ricocheted and hit us. Come and look,” one person wounded by a soldier’s bullet said. A correspondent for Habertürk immediately arrived on the scene and began to herald the ostensible massive resistance for democracy against the coup. The reporter’s first attempt was unsuccessful when a woman waving a flag behind the injured protester failed to control herself and started smiling. A second attempt failed when the injured man failed to say what the reporter wanted. On the third attempt, even though the injured man said, “The soldiers shot into the ground and then it hit us,” a number of times, the reporter continued to say, “The soldiers shot directly at you, no?” Exhausted, the injured man finally gave up and said “yes.”

We have no desire to make the violence or the coup attempt appear innocent, caricaturize the battles or trivialize the deaths. But what we witnessed was an anti-democratic coup attempt doomed to failure being faced by a government and its grassroots acting with equally anti-democratic impulses. The AKP, which called its grassroots onto the street “until the problem is solved,” is now looking to turn the incident to its advantage and force its own dictatorial project on society by presenting it as “a democratic movement that comes from the people below.”

It is necessary to expose the lie that the “15 July coup attempt was stopped by the people using their democratic right to resistance,” as well as the fascist nature of the crowds that sprang into action, to defeat the AKP’s attempts to impose a dictatorship.

Ultimately, it behoves everyone who says no to both a coup and an Islamist dictatorship to remember the third option presented at Gezi as a model for resisting for democracy.