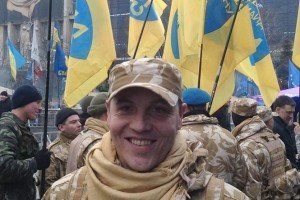 A prestigious institute at the University of Toronto has invited a founder of Ukraine’s modern, extreme-right and fascist movements to give a guest lecture on February 22. The Munk School of Global Affairs will host Andriy Paruiby (Parubiy) on February 22.

The main sponsor of the event is the Petro Jacyk Program for the Study of Ukraine. Co-sponsors are The Centre for European, Russian and Eurasian Studies and the Canadian Institute of Ukrainian Studies.

Parubiy is one of the founders of modern-day, extreme-right politics in Ukraine. He co-founded the Social-National Party of Ukraine (SNPU) in 1991. It went on to spawn other fascist or extreme-right formations, including the large, present-day Svoboda Party. Svoboda’s leader, Oleh Tyahnybok, was a founder with Parubiy of the SNPU.

During the EuroMaidan protest movement in 2013/early 2014, Paruiby was a commander of the extreme-right, shock troops that battled police and closed off Maidan Square in Kyiv to political forces with less extreme, pro-Europe views. Dozens of pro-Maidan protesters and police were killed by sniper fire from the buildings occupied by the Maidan shock troops. That story has just been told in full in an interview with Ottawa researcher Ivan Katchanovksi in the German online magazine Telepolis  (English translation here). 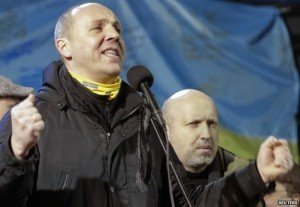 ‘Commander’ Andriy Paruiby on Maidan Square, Feb 2014; beside him is Oleksandr Turchynov, who replaced Paruiby in Aug 2014 as secretary of Ukraine’s national security council (Reuters)

Paruiby was appointed to head the new, right-wing Ukraine’s National Security and Defense Council of Ukraine on February 27, 2014. The NSDU is a key advisory body to the Ukrainian presidency. Paruiby’s appointment was quietly withdrawn in August 2014 in order to avoid international embarrassment.

Parubiy has sought to moderate his image in recent years, but he wrote in 2008: “I was one of the founders of SNPU and since that time, my political views and ideology haven’t changed.”

In its announcement of Paruiby’s lecture, the Munk School of Global Affairs provides a sanitized rendition of Andriy Paruiby. Here it is:

Andriy Parubiy is a leading public figure in Ukraine and is regarded as the leader of the Maidan Revolution of Dignity. He is immediate past Secretary of National Security and Defense Council of Ukraine – NSDCU (during the critical period of the onset of Russian aggression [sic]) and presently serves as First Deputy Speaker of Parliament.

Paruiby last visited Canada in February 2015, when he visited Toronto and Ottawa at the invitation of the Ukrainian Canadian Congress. He was feted on Parliament Hill by the then-government of Prime Minister Stephen Harper and by the two, large opposition parties of the day.

Background:
Who is Andriy Parubiy? Protest UK visit of Ukrainian politician with far right links, by Solidarity with the Antifascist Resistance in Ukraine, Oct 15, 2015 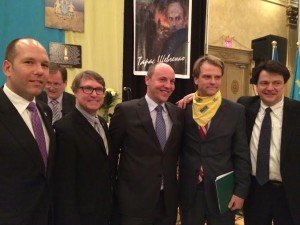 Andriy Parubiy (ctr) in Toronto Feb 22, 2015, with then-Minister of Immigration Chris Alexander (yellow scarf) and officials of the UCC