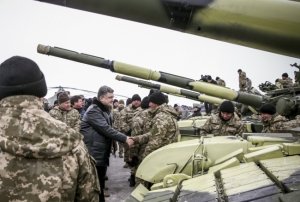 The office of President Petro Poroshenko organized a ceremony yesterday, Dec. 6, in Chuhuiv, Kharkiv region, to welcome the delivery of new tanks to the armed forces of Ukraine. The official announcement on the President’s website says the following models of tank were received: Т-64BМ ‘Bulat’, Т-64 BV, Т-72 B1, Т-72UA, Т-72A, BТR-3е and BТR-4е. Other weapons received were 2C1 self-propelled artillery Mi-8 and Mi-2 2C1 helicopters.

Although at least one published report said these weapons were of “unknown” sources, possibly foreign, they were manufactured in Ukraine (Ukrainian news report). Certain parts may be of foreign manufacture. That said, Poroshenko told the ceremony that the government is pressing to receive weapons from its “partners”.

Poroshenko told a welcoming ceremony: “We are providing the troops with new armored vehicles, precision anti-tank and counter-artillery weapons, and means of communication and protection. At the same time, we are holding negotiations with our partners on the procurement of modern weapons that are not produced in Ukraine.”

The official announcement of the ceremony said that the new weapons will “help Ukrainian warriors win and liberate the Ukrainian territories from the occupants.”

At the time of his election in May, 2014, Poroshenko was presented as a ‘peacemaking’ president. That myth continues to circulate. The Kyiv government signed a ceasefire on September 5 in the bloody war it has been waging against the rebellious southeast Ukraine. The population there is seeking political autonomy and the preservation of economic and political ties with Russia. Kyiv has been routinely violating that ceasefire.

Indeed, the violations of ceasefires or political agreements goes back to the very creation of the new, right-wing government in Kyiv in late February of this year. Following the violent clashes in Kyiv during Feb. 18 to 21, a political agreement was brokered by the European Union that would have seen early presidential elections. That agreement was immediately ignored and broken by the dynamic core of the ascendant right wing forces, including the extreme right.

A few days ago, the Kyiv government signed a supplementary ceasefire with the autonomous government and rebel forces of the Luhansk region in the southeast. There is talk of a supplementary ceasefire in Donetsk, too. But the weapons ceremony of Dec. 6 is a stark reminder of Kyiv’s goal to conquer the southeast, including through an ethnic cleansing that would see much of the region depopulated. Already, more than one and a half million of the region’s population have been displaced by the war. Most of those have fled to Russia. Many hundreds of thousands are also displaced to other regions of Ukraine.

Here is a video report of the delivery ceremony of the new weapons: 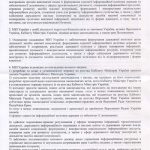 New Ministry of Information in Ukraine to control free speech, recording media and TV productionDigest, Ukraine
Public forum in Athens on Ukraine: ‘This is how fascism is defeated’Digest, Solidarity with Ukrainian people, Ukraine, Video presentation