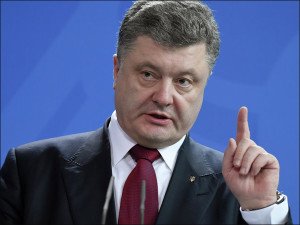 Speaking to the students at the Chernihiv National Pedagogical University in northern Ukraine, President Petro Poroshenko decided to show off his knowledge of history and once again attempted to demonstrate the superiority of the Ukrainian nation to other nations, Ukrainian media reported.

“I think there are only a few universities in Europe who can trace their history back to 1700. When in Chernigov [Chernihiv] there were century-old churches, in Moscow there was only a swamp,” the president announced from his podium, accompanied by the students’ applause.

But Ukrainian media reported,“By this statement, Poroshenko put himself in a rather embarrassing position, as Moscow was founded in 1147. In the second half of the XIII century, Moscow became the center of an independent principality, and at the beginning of the XIV century, the residence of the metropolitans [archbishops of the Russian Orthodox Church of a city or region] was moved to Moscow making the city a religious center. Therefore, it remains a mystery how the city, which was founded in 1147, and by the beginning of the XV century became a major trade and crafts center, was only a swamp.”

Journalists also pointed out that back then, Chernihiv was a part of the Russian state.

“All this proves once again that Poroshenko has problems not just with history, but with math as well,” a Ukrainian news agency reported.

Read also:
Ukraine will censor Russian films and TV programs, Mashable, April 2, 2014
The law, which was passed by Ukraine’s parliament on Feb. 5 before being sent to Poroshenko for his signature, bans Russian-language films and television shows made beginning in 2014, as well as films made after the end of the Soviet Union in 1991 that “popularize state organizations occupying [Ukraine] and popularize the values of a criminal underclass,” the law’s introductory text states.