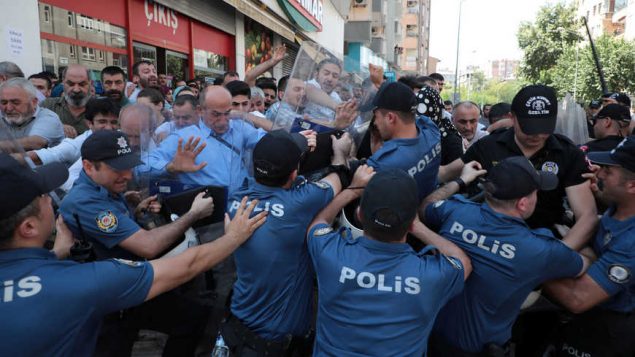 REUTERS/Sertac Kayar    Demonstrators scuffle with police during a protest against the replacement of Kurdish mayors with state officials in three cities, in Diyarbakir, Turkey, Aug. 20, 2019

Three democratically elected Kurdish mayors have been removed from their posts in a move that further endangers what remains of Turkey’s democracy.

The week has begun with worrying news for Kurds and other citizens of Turkey: The Interior Ministry removed three elected mayors from their posts, citing their alleged links with terrorism, in mainly Kurdish southeastern provinces of Turkey. Government trustees were appointed to replace the mayors of Diyarbakir, Mardin and Van. There is no need to argue how ridiculous the charges are against the removed mayors, who were elected by 63%, 56% and 53% of the vote respectively in March 31 local elections.

The mayor of Mardin, Ahmet Turk, was removed from the same post in the aftermath of the coup attempt in 2016 as part of a widespread crackdown on Kurdish politicians, activists and journalists. He is a veteran politician who has served at various intervals in the Turkish parliament since 1973, with a reputation far removed from any terrorism allegations.

Hugh Williamson, the Europe and Central Asia director at Human Rights Watch, said, “President [Recep Tayyip] Erdogan’s government has effectively canceled the results of the March local elections in the three main cities of the Kurdish southeast and east by removing voters’ chosen mayors, all valid candidates, and taking over these municipalities. Smearing the mayors by alleging vague links with terrorism to deprive the Kurdish population of their chosen representatives endangers everyone in Turkey who is committed to democratic elections, human rights and the rule of law.”

The mayor of Diyarbakir, Selcuk Mizrakli, is a medical doctor who claimed the trustee earlier appointed as mayor by the Erdogan regime was involved in corruption.

“The date Aug. 19 is a political earthquake in the history of Turkey,” Mizrakli told the Deutsche Welle news organization in describing the decision to oust him and his fellow mayors.

The trustee appointed by the Erdogan regime had left the Diyarbakir municipality with a huge debt that Mizrakli was making a dent in.

The first act of the new Van trustee was to hang up a huge photo of Erdogan and move the photo of Mustafa Kemal Ataturk, the founder of modern Turkish republic, elsewhere. Images of his placement of the Erdogan portrait were widely circulated on social media.

The trustees who had taken over in 2016 from elected (and then removed and jailed) mayors were said to have been corrupt and profligate by the recently removed mayors of Diyarbakir, Mardin and Van. The trustee in Diyarbakir had constructed a private gilded bath made of marble next to his office. Over 2 million liras ($350,000) was spent on furniture.

The trustee for Mardin who replaced Turk as mayor made headlines for sending silverware worth 500,000 liras to Erdogan and for spending 165,000 liras on pistachios and other nutshells.

The removal of the democratically elected Kurdish mayors less than five months after their elections rang warning bells for the future of democracy in Turkey. Democracy seems to be barely surviving on life support.

There are ongoing protests in Istanbul and the mainly Kurdish southeastern provinces of Turkey where police forces are attacking demonstrators who took to the streets to protest the government’s decision.

“We will be on the streets every day,” Sezai Temelli, co-chair of pro-Kurdish Peoples’ Democratic Party (HDP), told the local press Aug 20 in Diyarbakir.

Istanbul Mayor Ekrem Imamoglu, who was elected by a landslide in the June 23 rerun election, 806,000 votes ahead of Erdogan’s candidate, was also quick to react to the removal of the Kurdish mayors. “It is impossible to associate the removal of Diyarbakir, Van and Mardin mayors with democratic practices. The three mayors who are replaced by state-appointed trustees were elected by popular vote in the March 31 local elections. Ignoring the will of the people is unacceptable,” Imamoglu wrote on Twitter.

There is speculation that the removal of the three Kurdish mayors is a harbinger of worse to come. The mayors of Istanbul and Ankara, who belong to the main opposition Republican People’s Party, could also be removed in the same manner.

Many personalities who have previously been generally mute about the repression of Kurdish political figures were outspoken this time. Former President Abdullah Gul wrote on his Twitter account, “The ouster of the newly elected mayors in this manner is not good for our democracy.”

Gul is known as the “patron saint” of the new party to be founded under the leadership of Ali Babacan, Turkey’s economic czar during the first decade of Erdogan governments, when Turkey was considered to be an economic success story. The breakaway new party is expected to cut into the support base of Erdogan and his ruling Justice and Development Party.

Ahmet Davutoglu, a former top official who succeeded Erdogan as prime minister in 2014 and whose name was associated with the repression of the Kurds in 2015, also criticized the move against the mayors on his Twitter account. Davutoglu is also preparing to form a new party and attract those ready to split from Erdogan’s ruling party. He wrote that the practice of removing the elected mayors is “against the spirit of democracy.”

The Erdogan regime’s actions this year are reminiscent of the state of emergency period of the years 2016-2018, which triggered unrest mainly in Diyarbakir and in the southeast region as well as in Istanbul. Hundreds were detained, the municipality and other public offices in Diyarbakir were virtually sealed and the security forces took extraordinary measures in the city.

The crackdown appears to be continuing, making the Erdogan regime seem even more repressive, especially against the Kurds.

Yet it is a dangerous curve for Erdogan. He put his legitimacy into question with the humiliating defeat he witnessed in Istanbul in the June 24 rerun election. His crackdown on the Kurds this time has attracted criticism from a wide spectrum ranging from the mayor of Istanbul to Erdogan’s former fellow travelers such as Gul and Davutoglu. The president, who is facing a mounting economic and financial crisis — and the value of the lira began to fall against the US dollar after the removal of the Kurdish mayors — apparently thinks he has to suppress all expressions of dissent. He seems to fear that widening dissent and the inevitable splits in his party, will shorten his tenure.

What happened Aug. 19 might prove to be a political earthquake in Turkish history, just as Mizrakli has indicated.

The timing of the repression comes at a time when Turkey’s foreign policy failures have been resurfacing in Syria. The Syrian army pounded a Turkish military convoy that was on the road to reinforce Turkey’s allies in the Syrian opposition and also attacked the Turkish observation post to the south of the strategic town of Khan Sheikhun on the main highway between Damascus and Aleppo.

The Turkish Defense Ministry claimed the operations were being carried out by regime forces in violation of agreements reached with Russia. Turkey’s repeated warnings to Russian officials and reminders that it reserves the right to retaliate seemingly remained unheeded as Russian President Vladimir Putin said, “We support the efforts of the Syrian army.”

On the night of Aug. 19, Syrian regime forces captured Khan Sheikhun, and all of Turkey’s proxies in the region evacuated their positions. The Turkish observation post in Morek, 5 kilometers (3 miles) south of Khan Sheikhun, is now isolated.

Likewise, Turkish intentions to move into northeastern Syria did not get the necessary endorsement from the United States.

The move targeting elected Kurdish mayors “has direct bearing on ongoing talks between Turkey and the United States to establish a safe zone in Syrian Kurdish-controlled territory along Turkey’s common border with Syria,” Amberin Zaman wrote in Al-Monitor. “Certain US diplomats who have been quietly backing Ankara’s approach may find it even harder to convince their Syrian Kurdish allies that appeasement with Turkey pays.”

She also indicated that “the move is further evidence that Turkish President Recep Tayyip Erdogan has no intention of engaging with the HDP to help revitalize shelved peace talks with the PKK.” The PKK is the Kurdistan Workers Party, which has been fighting Turkey.

Turkey has had its share of blunders and failures in its neighbor to the south — from Idlib in Syria’s northwest to the Kurdish-dominated region in Syria’s northeast. Now Ankara, in what could be a well-calculated move to divert public attention and also whip up nationalist fervor against Kurds in both countries, may be targeting democratically elected Kurdish representatives in Turkey by associating them with terrorism, however unconvincingly. Erdogan and his hard-liner allies may think these practices might aid in the survival of the regime, which is proving more and more to be precarious.

Some observers say the regime, by resorting to such practices, appears to be in a frenzy and running amok.

Whatever the reasoning behind the decision to remove the three Kurdish mayors Aug. 19, tremors are likely to follow.

Cengiz Candar is a columnist for Al-Monitor’s Turkey Pulse. A journalist since 1976, he is the author of seven books in the Turkish language, mainly on Middle East issues, including the best-seller Mesopotamia Express: A Journey in History. Currently, he is a Distinguished Visiting Scholar at Stockholm University Institute for Turkish Studies (SUITS) and a Senior Associate Fellow at the Swedish Institute of International Affairs (UI).