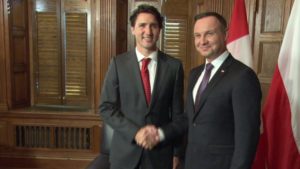 Poland’s president says he hopes Canada will increase its military presence in his country in order to help deter Russian aggression. In an interview with CBC News Network‘s ‘Power & Politics’, Andrzej Duda said it is “beyond any doubt” that Russia has an “expansionist, imperial policy,” and he would like to see Canada increase its military personnel and equipment in Poland.

Western allies are considering sending about 4,000 additional troops to the Baltic states and Poland on a rotational basis. The move is being worked out ahead of a NATO conference in July, which Duda is hosting in Warsaw.

Asked if this number of troops would satisfy Poland’s concern about Russian aggression, Duda said he would like to see more. “This is a big group of soldiers,” he said through a translator, adding, “I would like them to be joined by soldiers from other NATO member states … also by Canadian soldiers.”

Canada has 220 troops stationed in Europe as part of NATO’s Operation Reassurance. They are due to come home at the end of June. Duda is touring NATO member states to lobby for the troop increase ahead of the July summit.

Duda’s request comes as the European Union has issued its own demands of Poland. Since its election last year, the conservative Law and Justice Party has been criticized for attempting to rein in the Polish Constitutional Court.

After it took power, Duda’s government refused to seat judges appointed by the previous government, appointing its own judges instead. It later amended legislation to effectively curtail the power of the top court. The issue has led to ongoing protests in Poland. Tens of thousands took to the streets in Warsaw this past weekend [report below]. 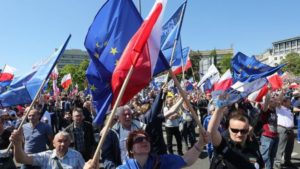 In Warsaw, Poland on May 7, protest against gov’t control of constitutional court and media (BBC)

The ruling party has also been accused of taking control of the country’s public media. Poland’s treasury minister is now in charge of hiring — and firing — public TV and radio management.

Last month, the EU called on Poland’s government to respect democracy. Members of the European Parliament passed a resolution saying the paralysis of the country’s top court poses a danger to democracy, human rights, and the rule of law. Political conflicts

Duda rejects the accusations that Poland’s democracy is crumbling. He concedes there is a “political conflict” over the constitutional court, but nothing more sinister than that. Rather, he says it’s the opposition party that is disappointed by its recent loss of power that is trying to use its connections in the European Parliament to stir up trouble.

“They are using that influence. Very often they are depicting the situation in our country in a false way,” Duda said.

When asked if NATO member states could put pressure on Poland to respect the rule of law in return for the military presence it is requesting, Duda insists these are two separate issues.

He said that on the one hand, “temporary political conflict … is just normal in every democratic state.” On the other hand is military security, which Duda characterizes as much more important.

“Political disputes like the one we’re going through in Poland are just temporary and passing,” he said. “I don’t think that wise politicians would like to combine these two things in any way.” Meeting Trudeau

Duda met Prime Minister Justin Trudeau on Tuesday to discuss security and trade issues. The Prime Minister’s Office did not respond by the time of publication when asked if Trudeau brought up the EU’s rebuke of Poland over democracy concerns.

Duda, 43, said he had “a very good conversation” with Trudeau. They had met briefly at the nuclear security summit in Washington in March, where Trudeau noted that with Duda attending, he was no longer the youngest leader in the room.

“I think we have a similar view of the world,” Duda said of Trudeau. “Of course we might differ in our views, but we have this young outlook on the world. We try to look very far into the future, both of us.”

Note by New Cold War.org:
There are close to 1,000 comments posted to the above CBC News story, including these two:
* Silly propaganda by Poland that is hard to understand. The US/NATO are at the borders of Russia and not the opposite.
* NATO is far more expansionist than Russia. This is just more anti-Russian propaganda.

Tens of thousands of people have taken to the streets in Warsaw to protest against the Polish government.

The protesters say the governing conservatives run an undemocratic administration that violates European values. A smaller protest against EU interference was also held.

The Law and Justice party has drawn criticism from the European Commission for its reforms of judicial, surveillance, and media laws. The government passed legal amendments late last year which change the way the Constitutional Court operates. The changes require a two-thirds majority of the 15 judges to support a ruling for it to be valid, and also stipulate a quorum of 13 judges for rulings to be valid.

Critics have said the changes mean the court is now unable to examine government legislation, and the issue has sparked mass protests in Poland.

The Council of Europe says changes undermine the rule of law, and the European Commission has launched an inquiry into changes to the Constitutional Court and media laws.

Recently approved media laws have placed public radio and TV under a new national media council and have given the treasury minister the right to hire and fire management. 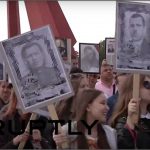 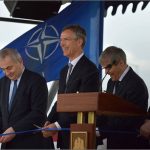