By Avi Selk, Washington Post, Nov 13, 2017  (with photos and video at original weblink)

The official celebration of Poland’s 99th independence day went innocuously, with the usual ceremonies in the capital. There was even a visit from the European Council’s internationalist president, who insisted to Politico that Saturday’s festivities would proceed “with a smile on our face and with joy in our hearts”. 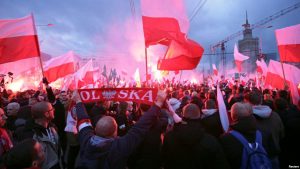 Far-right and neo-Nazis march in Warsaw on Nov 11, 2017 to celebrate Polish ‘independence’ (Reuters)

But for blocks and blocks and blocks beyond the central towers of Warsaw, a much larger crowd swelled beneath a cloud of red smoke. Tens of thousands of people had come from across Poland and beyond, and reporters documented their signs: “Clean Blood”, as seen by Politico. “White Europe” streaked across another banner, the Associated Press reported — as about 60,000 people chanted and marched through Warsaw in an annual gathering of Europe’s far-right movements, which have grown to dwarf the official version of Poland’s independence day celebration.

By the end of the weekend, the AP reported, the official and unofficial events even seemed to be merging.

Police had arrested 45 counterprotesters — but not one of the marchers seen carrying white supremacist symbols or heard chanting “Sieg Heil” in a country where Nazis carried out some of the Holocaust’s worst atrocities. Rather, Poland’s Foreign Ministry said Monday that the day had been “a great celebration of Poles, differing in their views, but united around the common values of freedom and loyalty to an independent homeland.”

Nov. 11 marks Poland’s celebration of its freedom from imperial rule in 1918. That freedom was interrupted over the following century by brutal occupations, first by Nazis, then communists.

In the 21st century, a group called All-Polish Youth, which the AP reported is named after a radical anti-Semitic group from the 1930s, began hosting a competing Nov. 11 celebration in Warsaw.

It began as a small thing, Politico reported. No more than a few hundred people showed up to the march in 2010, although the numbers soon grew into the thousands. In some years, the spectacle turned bloody — as when masked marchers threw rocks, flares and paving slabs at police in 2014, according to the BBC.

But in 2015, the conservative Law and Justice Party took power in Poland, fueled in part by anti-immigration politics that helped put other right-wing parties in power throughout Europe.

By all accounts, the Nov. 11 rallies since then have been fairly peaceful and very large. Some who marched under the flares and red smoke on Saturday were families and children, the AP reported. But more noticeable were droves of young men, some masked — and some chanting, “Death to enemies of the homeland.”

There was some violence Saturday, the AP reported, when nationalists pushed and kicked a group of women holding a banner that said “Stop Fascism”. But that was the only such report. A heavy police force kept the small assembly of counterprotesters separated from the far-right march.

Far-right leaders from Britain and Italy were welcomed by the crowd, according to the AP. (The U.S. alt-right [sic] leader Richard Spencer had been deemed too extreme by the Polish government, and he canceled his plans to attend.)

An Israeli Foreign Ministry spokesman called the march dangerous, per the AP. “History teaches us that expressions of racist hate must be dealt with swiftly and decisively,” he said — perhaps referring to the Nazi-era Warsaw ghetto, where hundreds of thousands of imprisoned Jews were deported to extermination camps if they were not killed before.

But the Polish Foreign Ministry waved off the worst reports about the crowd as “incidental,” the AP reported.

After the rally ended Saturday evening, a reporter asked Poland’s interior minister — a member of the right-wing government — what he thought of the banners and chants of “white Europe” and “pure blood”. “It’s only your opinion, because you behave like a political activist,” he replied, Politico reported.

According to the AP, the same minister called that swollen, crimson-fogged march across Warsaw “a beautiful sight.”

The rally, which has drawn tens of thousands from across Europe in recent years, is scheduled for Nov. 11 – Polish Independence Day. Expert says it may be the world’s largest gathering of far-right extremists.

Note by New Cold War.org:
Some Western media has apparently ‘discovered’ a right-wing government in Poland and its coddling of the extreme-right and neo-Nazi movements in the country. But no mention is made of Poland’s membership in NATO and the vast weapons and military training which its military receives from the large NATO countries. Nor the irony of Poland’s right-wing government welcoming far-right ‘patriots’ marching in Warsaw on the same date as the West’s hallowed Remembrance Day (November 11).

Meanwhile, the same media is still lost in its anti-Russia wilderness over similar conditions prevailing in Poland’s neighbour country Ukraine.

Update on Nov 15:
EU-Poland rift continues to grow after latest vote in European Parliament, by The Associated Press, Nov 15, 2017

Poland’s government hit back on November 15 after the European Parliament launched action over concerns that the right-wing government in Warsaw has compromised the independence of the judiciary and risks breaching fundamental European values.

Polish Prime Minister Beata Szydlo described the events in the European Parliament — where a bitter debate preceded the vote — as “scandalous”. The Foreign Ministry called the resolution a “political instrument of pressure on Poland,” describing the document as “one-sided” and saying it was based on political considerations and not on legal analysis.

In a resolution adopted by 438 to 152, with 71 abstentions, the European lawmakers triggered the first stage of a so-called rule-of-law procedure against the Polish government on Wednesday. The procedure could lead to the suspensions of Poland’s EU voting rights… 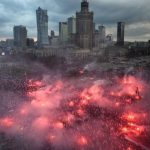 Tens of thousands of rightists and neo-Nazis rally in Warsaw on Nov 11 to mark ‘Polish independence’, call for ‘white Europe’Europe - East