“We must protect our children – our future!”

“Yes to the accreditation of schools for ethnic minorities!” 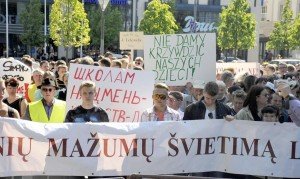 March in Vilnius, Lithuania on March 17, 2016 to defend language and cultural rights

These were the slogans chanted during a March 17 demonstration in Vilnius by teachers and students from the local Polish schools who were protesting the eradication of Polish-language education.

“We, the parents of children in ethnic-minority schools … oppose the city’s nationalist and discriminatory policy toward the education of ethnic minorities. Today we are defending ourselves and our children”, stated Renata Cytacka, the leader of the Parents Forum for Polish Schools in Lithuania.

“We’re furious about the way the Lithuanian authorities are treating us … They have a double standard, under which some schools receive accreditation while others do not”, emphasized Tatiana Korzeniewska, a spokesperson from the Committee to Protect the Władysław Syrokomla School (named for the Polish poet).

The Polish protesters spoke out to defend not only the Polish but also the Russian schools in Vilnius.

The demonstrations were supported by Electoral Action of Poles in Lithuania (AWPL), a political party led by Valdemar Tomaševski, a member of the European Parliament. That party works alongside Russian NGOs to fight Lithuania’s assimilation policy. AWPL included representatives of the Russian Alliance on its ballot during the elections to the Lithuanian Seimas in 2008, and again during European Parliament elections in 2009. And that party affiliated itself with the Russian Alliance once more during the 2011 local elections.

There are currently around 200,000 representatives of the Polish diaspora residing in Lithuania (data from 2011). The history of that diaspora can be traced back to the era of the Polish–Lithuanian Commonwealth, when Lithuania was under the rule of the Polish crown. Šalčininkai is seen as the most thoroughly Polish district in Lithuania: 80% of the population there is ethnically Polish. As are almost 19% of the inhabitants of Vilnius.

The Lithuanian government is trying to assimilate its ethnic minorities – which includes Poles. Poles are threatened with fines for posting bilingual signs in places where they make up a large percentage of the population, and the spelling of their surnames is forcibly changed to Lithuanian. Poles even suffer discrimination when land is privatized in “Polish” regions.

Seventy-nine percent of Lithuania’s Poles consider Polish to be their native language (according to 2011 census data). In the 1990s, over 20,000 ethnically Polish children were educated in Polish, but by 2012 that number had dwindled to 13,000. There is no precise data for 2016, but by all indications the Polish language is being increasingly marginalized. The state claims that the closure of Polish schools is a purely economic decision, although money is available for private Lithuanian schools.

Winnicki has called this a betrayal on the part of Warsaw and has urged the Polish government to add some ultimatums to its ongoing dialog with Lithuania.

But instead, the pro-government media in Poland (Nowa Europa Wschodnia, Gazeta Polska Codziennie, and others) have launched an attack on Valdemar Tomaševski and Electoral Action of Poles in Lithuania. Polish activists in Lithuania have also been labeled as “agents of the Kremlin”.

Przemysław Żurawski vel Grajewski, a representative of the Polish President’s National Development Council and an advisor to the foreign minister, expressed Warsaw’s official point of view. “Those Poles who insist that relations with Lithuania be severed until Vilnius recognizes the rights of Lithuanian Poles are committing a sin against Poland”, he claimed. He has made other statements that are even more scathing. Previously, while speaking of his fellow ethnic Poles from the “Eastern Borderlands” (the Kresy region), he had this to say: “Every nation already has its own share of idiots. So it’s a good thing that the people who call themselves the ‘kresowiacy’ are not governed by Poland”.

Warsaw is sacrificing the interests of Lithuanian Poles, hoping to work with Vilnius to create and then take leadership of an anti-Russian union in the Baltics. Lithuanian Poles are doomed to be victimized by the assimilation policy for ethnic minorities that is being pursued by the Lithuanian government. In 1989 there were 285,000 Poles living in Lithuania, but today 85,000 fewer remain.

Vladislav Gulevich is a political scientist and analyst at the Center for Conservative Studies at the Sociology Department of Moscow State University of International Relations. 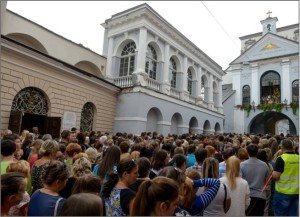 As Radio Poland explains, strikers are demanding the abolition of several provisions to the 2011 Education Act which they say discriminate against the Polish minority in the country.

Specifically, the strikers call on the government to abolish the unified Lithuanian language exam, made mandatory upon the completion of secondary education in all Lithuanian schools, for the return of a simplified exam for Polish-language students. Strikers are also calling for an increase in funding for minority schools.

One of the organizers of the protest, the Parents’ Forum at Polish Schools, put out a statement Wednesday, emphasizing that protest “protest was forced,” adding that “we just do not see any other way to draw the authorities’ attention to problems in the sphere of education for national minorities.” With a series of similar protest actions taking place since June, the protesters vowed that this time, “we will fight until we succeed.”

Lithuania’s Baltic News Service explained that the country’s ethnic Polish students “feel discriminated against in connection with the reorganization of schools for national minorities in Vilnius,” a process taking place over the past several years and resulting in the closure of several minority schools due to low attendance.

Other students complain that the approximately 800 hours of study time required to prepare for the unified language exam is keeping them back on other subjects. Passing the exam is mandatory for entry into local colleges and universities.

According to Baltic news portal Delfi, the strike has affected at least 61 schools in the Vilnius region thus far. The Polish minority schools were also joined in spirit (and in some instances physically) by their Russian counterparts, with parents from the Russian minority signing an online petition saying that they would ‘resolutely defend’ the right of their children to be educated in their mother tongue.

Organizing a prayer vigil before the Church of St. Teresa in Vilnius, the protesters prayed that conditions would improve. Marek Kuczynski, the Vice Speaker of Poland’s parliament, said that the prayer was a sign of protest, telling local media that “when the authorities do not hear us, we can appeal only to God.”

Lithuanian Prime Minister Algirdas Butkevicius immediately stepped out against the strike, saying that he does not “understand completely what reasons led to such irresponsible actions,” adding that he considered the move “politicking.” Other officials similarly argued that conditions in the country’s minority schools, financial and otherwise, are already the best in the European Union.

Lithuania has 51 Polish-language schools, 31 Russian schools, one Belarusian school, and 36 mixed schools. Delfi explained that minority schools have faced a 48 percent decline in attendance over the past 15 years, with Lithuanian schools seeing a similarly catastrophic decline, by 39 percent. At the same time, according to the news site, the number of Polish-language schools has declined by 35 percent, while the number of Lithuanian schools has dropped by 48 percent.

The Polish minority, 200,000-strong, comprises 6.6 percent of the Lithuania’s population of 3 million. They are concentrated in the south-eastern region of Vilnius, a region once controlled by Poland before being returned to Lithuania with the assistance of the Soviet army in 1939, shortly before Lithuania itself became a republic of the Soviet Union.

Although perceived discrimination against national minorities is lower in Lithuania than in neighboring Latvia and Estonia, Polish and Russian minorities have nonetheless complained of systemic discrimination by the Lithuanian government over several issues, including the underfunding of minority educational and cultural institutions, the Lithuanization of Polish surnames, and the renaming of street names in several Polish communities. However, unlike Estonia and Latvia, national minorities living in Lithuania were granted citizenship immediately following independence, and do not face the openly discriminatory policy of the ‘alien’ or ‘non-citizen’ passports. 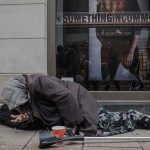 Romania turns its back on dark past of Roma slaveryEurope - East 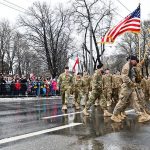