Ukraine ready for dialogue with Poland on historic Volyn Massacre 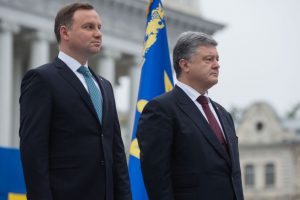 KYIV – Ukraine is ready for a constructive dialogue with Poland regarding the 20th century massacre of Poles by Ukrainian nationalists and believes that in the near future a mutual understanding will be found, Ukrainian President Petro Poroshenko said Wednesday.

Earlier in the day, Poroshenko met with his Polish counterpart Andrzej Duda to discuss regional issues and cooperation. “We must honor our history and take steps that contribute to the improvement of relations between our countries… The Ukrainian side is ready for a frank and constructive dialogue on the tragic pages of our common history and believes that this understanding [will be reached] in the near future,” Poroshenko said during a joint briefing with Duda.

Duda, in turn, said that that Warsaw and Kiev were set to pursue the dialogue on contentious issues of common history, while inviting Poroshenko to visit Warsaw in December. “We will continue the dialogue on this issue and we will try to make the talks even more productive than they are today. You can also rely on our concerted action in this matter, and in December, I think will be able to talk about concrete proposals,” the Polish president said.

Representatives of Poland’s Democratic Left Alliance consider the Ukrainian Rada’s recognition last year of the Ukrainian Insurgent Army (UPA) as fighters for independence a slap in the face to the people of Poland and to its president, Polish Press Agency reports.

Poland believes that the Ukrainian Insurgent Army nationalists committed genocide against Polish citizens of the Second Republic of Poland in 1939-1945. The violence culminated on July 11, 1943 — the so-called Volyn Massacre — when some 150 Polish settlements were attacked by the Ukrainians.

Relations between the two countries deteriorated after last month when the Polish parliament adopted a resolution recognizing July 11 as National Remembrance Day of a 1943-45 genocide committed by Ukrainian nationalists.

The Polish action was prompted by a decision of the Ukrainian Rada in 2015. Ukrainian nationalists deny that a deliberate massacre of Poles took place in Volyn. They call the killings that occurred there the ‘Volyn Tragedy’.

Poland’s lower house of parliament, the Sejm, has voted to declare World War II-era killings committed by Ukrainian nationalists against Polish civilians “genocide” in a move that could provoke tensions between the two neighbors.

Kyiv, which rejects the genocide label for the crimes, reacted cautiously, with President Petro Poroshenko expressing “regret” over Warsaw’s move.

Poroshenko cautioned that the resolution could be used against his country. Ukraine has been embroiled in a conflict with Russia-backed separatists that has claimed more than 9,400 lives since April 2014. Poroshenko also called for reconciliation and forgiveness between the two nations.

The move by the right-wing-dominated Sejm reverses a 2013 decision led by liberal lawmakers that stopped short of calling the killings of tens of thousands Poles by Ukrainian nationalists a genocide. “The victims of the crimes committed in the 1940s by Ukrainian nationalists were not duly commemorated, and the mass murder was not defined as genocide in accordance with the historical truth,” reads the Sejm resolution, which was adopted by a 432-1 vote with one abstention.

Historians say that in 1943-44, members of the paramilitary Ukrainian Insurgent Army (UPA) massacred between 35,000-60,000 Polish civilians, including many children, women, and elderly in the Volyn region of what is now northwest Ukraine, known in Polish as Wolyn. The UPA’s main objective was said to have been to win Ukrainian independence by ousting Nazi and later Soviet occupiers and to clear Poles from territories that were historically Ukrainian land.

The killings provoked bloody reprisals by Polish partisans grouped in the anti-Nazi and anti-Soviet Home Army (AK). They killed an estimated 20,000 Ukrainians. None of the massacres was officially acknowledged under communism, but they have remained a painful part of Poland’s national consciousness.

The Sejm resolution also recognizes Polish crimes, saying: “Nor can one dismiss or downplay acts of Polish revenge on Ukrainian villages, during which civilian populations also perished.”

“I’m sorry to hear about the decision of the Polish Sejm. I know that many will seek to use it for political speculations,” Poroshenko wrote on Facebook. “However, we must return to the commandments of [Pope] John Paul II — forgive and ask for forgiveness. Only by joint steps can we achieve Christian reconciliation and unity. Only together can we clarify all the facts of the tragic pages of our common history.”

Andriy Deshchytsia, Ukraine’s ambassador to Poland, also said he regrets that “preference was given to a unilateral assessment of political events, rather than professional or even international Ukrainian-Polish expert research and relevant legal conclusions about what happened.”

Poland has been a strong backer of Ukraine’s independence and democracy, and has been a Western counterbalance to Russia’s influence. Warsaw has also supported closer ties between the European Union and Kyiv.

Occasionally, controversies from their shared history have resurfaced between the two neighbors, who share a 500 kilometer border, though without a major impact on bilateral relations. In 2013, the liberal government adopted a softer version of the resolution to maintain amicable relations with Ukraine, which was moving closer to the European Union. The 2013 resolution referred to the war-time mass-murders as “ethnic cleansing characterized by signs of genocide.”

But Jaroslaw Kaczynski, Poland’s powerful leader of the governing right-wing Law and Justice Party (PiS), has long pushed for the killings to be labeled genocide. Kaczynski holds no government post but is widely regarded as Poland’s real powerbroker.

The PiS gained won a clear victory in October’s parliamentary elections on an antimigrant populist platform, handing a heavy defeat to the liberal Civic Platform.

The Polish Foreign Ministry has said it is “astonished” at a draft resolution submitted to the Ukrainian parliament referring to “genocide” by Poles against Ukrainians over several decades up to 1951.

Honors for Ukrainian nationalists anger their victims – in Poland, by Fred Weir and Monika Rebala, Christian Science Monitor, May 11, 2015

Those who claim that Ukraine needs Stepan Bandera and UPA to have a strong identity are ignorant of Ukrainian history.

Ethnic cleansing, genocide or Ukrainian-Polish conflict? The mass murder of Poles by the OUN and the UPA in Volhynia, by Ivan Katchanovski, paper prepared for presentation at the 19th Annual World Convention of the Association for the Study of Nationalities, Columbia University, New York, April 24-26, 2014

Massacres of Poles in Volhynia and Eastern Galicia, in Wikipedia