By New Cold War
Posted January 14, 2015
In Background, Feature Articles, Halyna Mokrushyna, Ukraine
Petro Poroshenko with the “civilized” in Paris: The other Ukraine must be heard2015-01-142015-01-23https://newcoldwar.org/wp-content/uploads/2020/05/2020-NCW-Logo-New.pngNew Cold War: Know Betterhttps://newcoldwar.org/wp-content/uploads/2015/01/French-president-Hollande-greets-Ukraine-president-Poroshenko-in-Paris-Jan-11-2015-photo-by-AFP.jpg200px200px

President Petro Poroshenko of Ukraine stated in Paris on January 11 that the Charlie Hebdo tragedy has united all civilized countries. He marched proudly at the front line of the huge crowd of “civilized people” who were expressing their solidarity with freedom of speech against terrorism. Poroshenko’s participation in the march presumably qualifies Ukraine as one of the “civilized countries”. He is outraged by the terrible attack on Western values, in whose name the Ukrainian army is bombing and shelling its own citizens in the Donbas region in the east of the country. 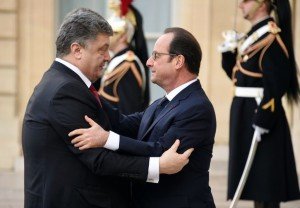 Over 4,800 civilians have died since the Ukrainian government launched an “anti-terroristic operation” against Donbas in April 2014. Donbas did not want a nationalist parliament and nationalist ideology which refuses to Russian-speaking citizens the right to have their language recognized as the second official language of Ukraine. Donbas rejects the anti-Russian and anti-Soviet interpretation of history which the extremist parties making up the majority of the Parliament are imposing on Ukraine. It takes pride in its Soviet past. Donbas is different from the rest of Ukraine first of all in those two features.

Donbas is an industrial region in which 75% of the population considers Russian to be its mother tongue–even though over half of the residents of the region (57%) are ethnic Ukrainians, according to the Ukrainian census of 2001. In Donetsk city, the dominance of Russian language is even higher – 88% versus 11% of people for whom Ukrainian is a mother tongue. The ethnicity of Donetsk’s residents is split roughly evenly – 47% Ukrainian versus 48% Russian.

One of the first steps of the new, right-wing government that seized power in Kyiv in late February of last year, largely thanks to nationalistic, paramilitary units of the ‘Euromaidan’ movement, was an attempt to abolish Ukraine’s law on languages. This law, adopted in 2012 in an effort to quell tensions being created by right-wing nationalists, granted the right to use Russian and other minority languages in regions where this minority constitutes at least 10% of the local population. Minority language services would be provided and used in public administration, education and cultural activities. This attempt to abolish the law on languages sent a clear signal to Donbas: the new Ukrainian regime will continue to implement its nationalist agenda. Donbas rebelled.

A series of pro-Russian demonstrations took place in major cities of South and Eastern Ukraine – Odessa, Kharkiv, Mariupol, Donetsk. It was a response to the nationalist discourse coming out of Kyiv. A discourse in which Soviet Union was portrayed as an “occupant” which suppressed the Ukrainian language, Ukrainian culture and a Ukrainian quest for independence. In this discourse, the Soviet Union was an empire, a direct heir of the Russian tsarist imperialism. How were people for whom being Soviet is a significant part of their identity to react to such a discourse?

Donbas people have a strong regional identity, built on the Cossack freemen spirit, proletarian pride, and internationalism. According to a recent poll conducted by the Institute of Sociology of the National Academy of Sciences of Ukraine, residents of Donbas identify themselves as citizens of Ukraine (34%), people of Donbas (27%), residents of a town/city (19%), and former Soviet citizens (14%). To compare, in the rest of Ukraine, the national component of self-identification (citizen of Ukraine) is much stronger than in Donbas – 60% in the South, 67% in Eastern Ukraine, 70% in the West and 76% in Central Ukraine).

Donbas has been asking for regional autonomy and the recognition of Russian as a second official language of Ukraine since 1994. On March 27, 1994, concomitantly with elections to the Verkhovna Rada (‘Supreme Council’, or Parliament), a local referendum was held in Donetsk and Luhansk regions in which the vast majority of people voted in favor of the federalization of Ukraine (decentralization of central government powers), the use of Russian language as a second official language, and Ukraine joining the Commonwealth of Independent States (an association of former Soviet republics led by Russia).

Kyiv has consistently refused to hold a national referendum on these vital issues for Ukraine. According to the Constitution of Ukraine, the holding of regional referendums is illegal. All of this supposedly because Ukraine’s political elites were afraid of the “imperialistic” ambitions of Ukraine’s big brother – Russia. Ukraine’s elites preferred to ignore voices coming from Eastern Ukraine.

In 2013, the Communist Party of Ukraine proposed to hold a referendum on the political future of Ukraine—whether to seek closer relations with the European Union or retain close ties to Russia. The party collected more than three million signatures in favor of such a referendum. Then-President Viktor Yanukovych declared such a referendum illegal.

From Kyiv’s perspective, any request by a region to have more administrative and financial autonomy is an encroachment on Ukrainian sovereignty. The word “federalization” provokes panic and fear. Kyiv prefers killing its own citizens instead of negotiating and accommodating.

Kyiv claims that the rebellion in Donbas (Donetsk and Luhansk regions) is purely a product of Russian support. It is said that Russia encouraged anti-Maidan protests, Russian troops are fighting against the Ukrainian army and Russians are destroying the Donbas infrastructure, while at the same time, in some kind of a twisted logic, Russia is acknowledged but condemned for sending one humanitarian convoy after another to help Donbas residents.

It is true that Russia is involved in Donbas. The majority of the population of Donbas has consistently expressed its desire to have closer ties with Russia, not with European Union. The overwhelming majority of Donbas residents saw in the Euromaidan movement a coup d’état–orchestrated either by the West (51%) or by the opposition (21,5%), according to a poll conducted in October 2014 by the Kyiv International Institute of Sociology and the Ilko Kucheriv Democratic Initiative Fund. This perception coincides with the interpretation of the Euromaidan revolution by the majority of citizens of Russia, including President Vladimir Putin.

Russia could not remain indifferent to events, particularly to Kyiv’s decision to seek close military ties with NATO, if not eventual membership of the aggressive military alliance. And volunteers from Russia went to Donbas to defend the people they perceive as their brothers and sisters. As for the regular Russian military fighting in Donbas, no convincing evidence has been presented so far in Ukrainian or Western media. If Russia really decided to send troops, any resulting war would be over in a couple of weeks and the Donbas insurgency would not be complaining about lack of military support from Russia.

As for political and financial support, how is Russia’s defending the rights of Russian-speaking Ukrainians any different from the NATO governments’ involvement in Ukraine? The West spends huge amounts of money supporting NGOs which promote so-called European values. Ukrainian parties, such as UDAR, have direct financial support from the German government and the Conrad Adenauer Foundation. How about the famous visits to Maidan Square of Victoria Nuland, John McCain and other Western politicians declaring openly their support for the political goals of protesters? Is this not interference in a country’s internal affairs? Ah yes, we know the answer – they were supporting Ukrainians in their fight for democracy and human dignity, against the corrupt, kleptomaniac regime of the dictator Yanukovych.

Today, after the “bloody dictator” fled and democracy reigns, why is the new regime in Kyiv fighting a war against its own citizens instead of sitting down at the table of negotiations in a truly democratic spirit? Why is Kyiv still refusing to hear a different opinion? Why is national history being rewritten to suit one nationalist narrative instead of offering a plurality of perspectives? Why is the Ukrainian government imposing a war tax of one and a half per cent on impoverished Ukrainians and waging a nationalist, propaganda war in national and international media, trying to convince Ukrainians they are fighting a war against Russia?

This war has already killed thousands of Ukrainians. Many more thousands of Ukrainian families have been split over the issue of relations with Russia. The economy and infrastructure of Donbas are ruined. Is it better to kill and destroy or take a chance and negotiate? Ukraine is not a mono-ethnic, mono-cultural country. It will never fit into this mold, no matter how hard the current Kyiv regime tries to squeeze Ukraine into it by suppressing dissenting opinions.

Democracy, which Kyiv so much adores and venerates together with the “civilized countries”, as President Poroshenko puts it, is about learning to live with differences, by respecting and accommodating them. I do not see any sign of if coming from Kyiv. Joining a march to commemorate the writers of Charlie Hebdo is not enough to make of Ukraine a democratic country. What Ukraine really needs is a president and a government that listens to all Ukrainians and respects their right to be different. Yes, the majority of Ukrainians want to be part of Europe. But there is also the other Ukraine that wants to keep close ties with Russia. Any political project of state-building in Ukraine will succeed only if this other Ukraine is heard and accommodated.

Halyna Mokrushyna is currently enrolled in the PhD program in sociology at the University of Ottawa and is a part-time professor there. She holds a doctorate in linguistics and an MA degree in communication. Her academic interests include: transitional justice; collective memory; ethnic studies; dissent movement in Ukraine; history of Ukraine; sociological thought.  Her doctoral project deals with the memory of Stalinist purges in Ukraine. In the summer of 2013, she travelled to Lviv, Kyiv, Kharkiv and Donetsk to conduct her field research. She is currently working on completing her thesis. She can be reached at [email protected] 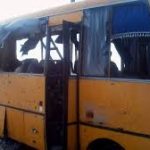