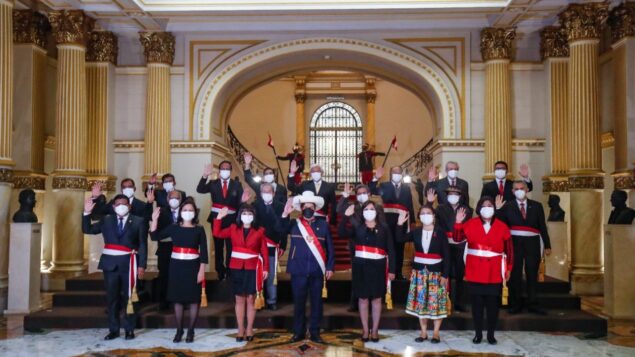 The cabinet reshuffle has triggered conflict in the Free Peru party. Nevertheless, legislators across the left have vowed to remain united and support social reforms in the country.

The political pressure from Peru’s right-wing forces against the newly inaugurated progressive administration of the Free Peru party forced President Pedro Castillo to reshuffle his ministerial cabinet just 70 days after taking office. On October 6, President Castillo swore in his new cabinet with seven new ministers out of a total of 19.

On the evening of October 6, prime minister and head of the council of ministers, Guido Bellido, resigned from his position at the request of the president due to conflicts with the Congress, dominated by the right-wing opposition parties. Bellido’s resignation automatically prompted the resignation of the entire cabinet. The same night, Castillo appointed Mirtha Vasquez of left-wing Broad Front party as the country’s new prime minister. Along with Vasquez, six other new ministers, with only one of them belonging to the ruling Free Peru party that helped to put Castillo into power, were incorporated in the new cabinet.

In a brief television address, Castillo said that it was “time to put Peru above ideologies and isolated party impositions” and thanked Bellido for his services. The head of state added that he had “made these decisions in favor of governability” and that “the balance of powers is the bridge between the rule of law and democracy. It must seek tranquility and cohesion in government.” The president also said that his administration would “promote private investment,” but “without corruption and with social responsibility, and prioritizing productive diversification.”

Political response to the new cabinet

The conservative opposition sectors in the Congress, which had been demanding Bellido’s resignation for his strong left-wing stance, expressed their general satisfaction over the new cabinet. However, some far-right legislators raised concerns about the presence of Gallardo, because she belongs to a “radical” teachers’ union; and of Barranzuela, because he is the lawyer of the party and its founder Vladimir Cerrón.

Meanwhile, the cabinet reshuffle triggered internal conflict in the ruling party. The spokesman for the parliamentarian bench of the Free Peru party, Waldemar Cerrón, considered the formation of the new cabinet a betrayal and demanded that the president rectify it. The bench publicly announced that it did not accept the new cabinet, but that it would not obstruct the functioning of the government either.

Nevertheless, the left in Peru, including the Broad Front and the New Peru party, called to maintain unity in the face of the right-wing’s maneuvers to prevent the government from bringing about social changes in the country. The parties vowed to support the second agrarian reform, presented last Sunday by the president; the comprehensive health reform, as well as the creation of a Constituent Assembly to rewrite the current Constitution, among others.

Why was Bellido targeted?

In recent weeks, Bellido had openly supported the nationalization of Peru’s natural gas sector. He had asked the foreign companies managing natural gas projects in the country to be prepared to pay increased tax revenue to support the government’s social programs or face nationalization. This was not welcomed by the conservative sectors, which advocate the interests and profits of big corporations.

He also defended the now-replaced labor minister Maraví, who had been facing a motion of censure in the Congress for allegedly having been a part of a Maoist insurgency in his youth.

Bellido also suggested that the government should be prepared to shut down the Congress if the legislators tried to impeach the president. This statement came in response to the recent threats by the president of the Congress, María del Carmen Alva Prieto, who declared that the National Assembly would seek a presidential vacancy if Castillo defended any of his ministers before parliamentary censorship.

What lies ahead for the government?

The progressive sectors believe that the far-right sectors, which have been constantly attacking politically, mediatically and judicialy the socialist government in attempts to destabilize it, will continue to pressurize the government to submit to their demands and disrupt its social plans.

The platform Social Movements of ALBA, which brings together more than 400 social movements from 25 Latin American countries, in August, warned that a coup d’état was in progress against Castillo’s government and that it was promoted by the Congress.