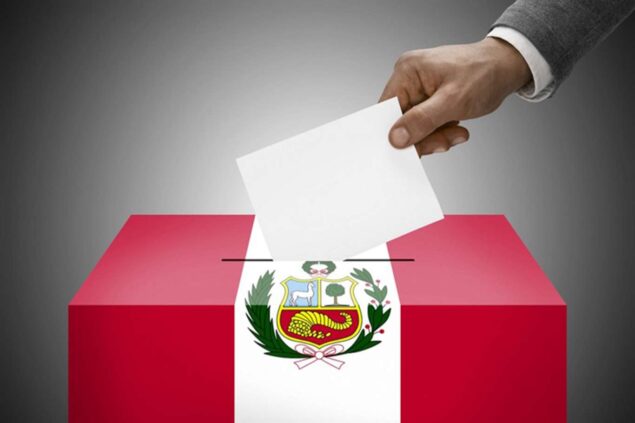 Today, 25m Peruvians vote in the second round of a crucial Presidential election.  The voters are being asked to choose between two candidates.

Today, 25m Peruvians vote in the second round of a crucial Presidential election.  The voters are being asked to choose between two candidates.  The first and leading in the polls is ‘self-confessed’ socialist Pedro Castillo, 51 years old, a schoolteacher, based Cajamarca, one of the poorest regions of Peru and home to South America’s largest gold mine. A leader of a teachers’ union since 1995, he has been a schoolteacher in the village of Puña in the northern Chota province.

His opponent is Keiko Fujimori, daughter of former president Alberto Fujimori.  Aged 45, she has spent most of the last two years in pre-trial detention, accused of money laundering and running a criminal organisation, which she denies. Her father, Alberto Fujimori, governed Peru in the 1990s and was convicted over  death squad killings and rampant corruption.

In the central and southern regions of the country there is significant support for Castillo, while Fujimoro is relying on votes from the middle classes based in Lima, the capital, where according to polls, barely 5% of voters support Castillo.  Lima is home to a quarter of Peru’s 32.5 million citizens, but in the country’s poorest regions, Castillo’s support is over 50%, and he is also backed by the country’s half a million public school teachers.

Castillo’s Perú Libre (Free Peru) party manifesto describes its politics as “socialist, Marxist, Leninist and mariáteguist” – after the founder of the Peruvian Communist party José Carlos Mariátegui – and has set out plans to expropriate foreign mining projects.  Castillo has pledged to replace the reactionary 1993 Constitution with a ‘people’s constitution’ (as Chileans are similarly pushing for); to regulate the media to “put an end to junk TV”; and to raise budget allocations for education and healthcare.  Castillo also advocates widespread nationalisation, higher taxes and import substitution policies.

But like other leftist leaders in South America, he is a ‘social conservative’: against abortion, same-sex marriage, euthanasia and ‘gender perspective’ in schools.  Castillo considers these issues as secondary to what he reckons is a “a battle between the rich and the poor, the struggle between the master and the slave.”

Fujimoro’s political message is simple: stop the ‘Marxist-socialist’ from becoming president and destroying Peru’s economy.  Her main political plank is to free her father from prison (it seems that Presidents like her can dispense with the rule of law if they so choose).  Naturally the media campaign has been vicious against Castillo and Peru’s middle class intellectuals, who have quite a reputation internationally, have lined up their support for Fujimoro.

Despite a string of corruption scandals which saw three presidents come and go, and the shock of the continent’s biggest ever corruption scandal in which four former presidents were accused of taking bribes from the Brazilian construction firm Odebrecht, many ‘intellectuals’ take the position of Nobel prize-winning Peruvian author Mario Vargas Llosa, who had endorsed Fujimori’s opponents in elections in 2011 and 2016, but now backs her because “she represents the lesser of two evils”.

The election takes place in a country that has been the hardest hit of all from the COVID pandemic with 1.8m officially confirmed cases and more than 120,000 deaths, leaving a weak and mainly private healthcare system on its knees. Rising death rates have recently forced the return of the restrictions which made millions destitute at the outbreak of the pandemic. 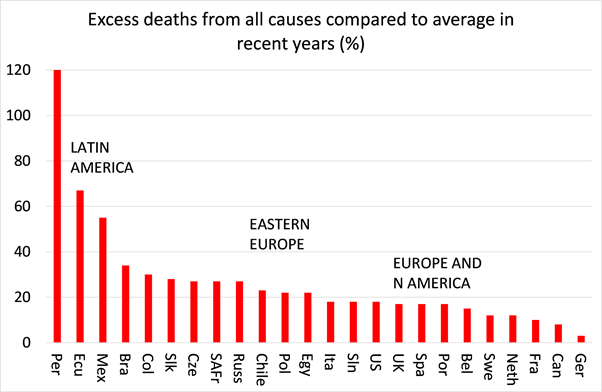 With the world’s worst per capita death toll from coronavirus and one of the biggest emerging market recessions last year, Peru is in crisis, with all the failings of weak capitalist economy that survives mainly on commodity exports controlled by foreign multi-nationals.  Peru’s economy is highly dependent on its vast mineral resources, and its extractive sector is the main driver of growth. Peru is the world’s third-biggest producer of copper, its major export metal, and the country also attracts the world’s major mining companies to tap into its deposits of gold, silver, zinc and other minerals.

Peru in the decade leading up to the pandemic combined Latin America’s second highest annual growth rate of over 5% per cent with low inflation and modest debt. But as in the rest of the region, its pace of growth after the end of the commodity boom in 2012, coupled with the global economic slowdown, reduced economic expansion (dropping to an average 3% a year) and then the pandemic hit.

The economic success during the commodity boom hid deep problems endemic to all capitalist economies under the heel of imperialism.  While income inequality in Peru is relatively low by Latin American standards, given that Latin America is the most unequal region in the world, that is not saying much.  And when it comes to inequality of personal wealth, Peru is more unequal than Mexico and most of its close neighbours.  The better-off in Peru had abandoned poor-quality health and education services for private alternatives and so would not pay for them in taxation. Many jobs that were created were low wage and informal. 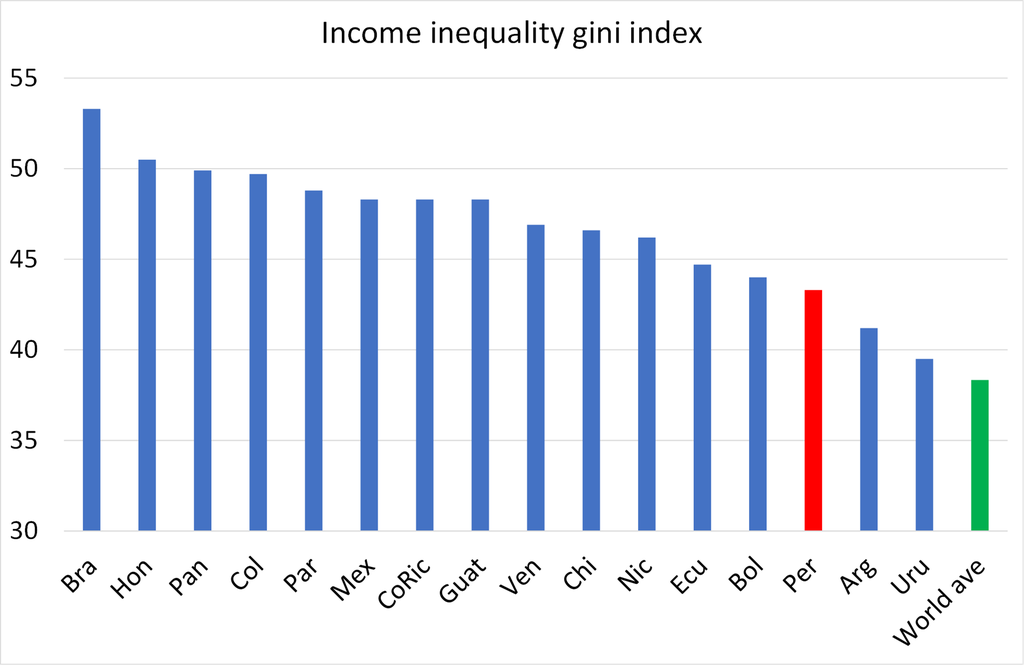 Peru’s economy, like that of Bolivia and to some extent Chile, is almost a ‘one-trick pony’; its survival depends on the world price of metal materials, especially copper.  Private investments in mining account for one-fifth of total private investment.  Then there are agro exports like high-value fresh fruits and vegetables (mostly grapes, avocados, blueberries and asparagus) and fish meal. A boom in demand for these products in the ‘global north’ contributed to reducing poverty somewhat in rural areas.

But the fall in commodity prices after 2012 up to the arrival of the pandemic ended this progress.  And when coronavirus hit the country with full force last year, the economy was crippled, deaths soared and poverty worsened. A strict and prolonged quarantine led to a decline in GDP of 11.1 percent in 2020. 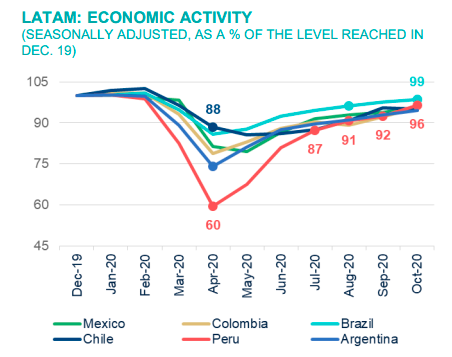 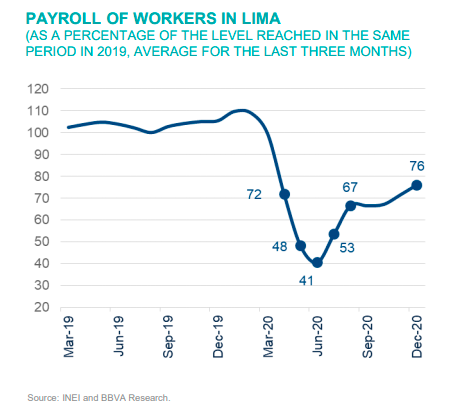 What emerged was a picture of a state chronically unable to deliver. The health system proved hopelessly inadequate. Enforcement of the lockdown was patchy. Those who toiled in the informal economy had no choice but to continue working, risking death and illness.

At about 70 percent for labour outside of agriculture and half of all firms, informal working in Peru is among the highest in the LAC region, far above that of Mexico (60 percent) and Colombia (54 percent). Furthermore, about 13 percent of the country’s GDP originates in the informal sector, with limited access to credit from the formal financial system. This affects productivity significantly: productivity of informal enterprises is about one-third that of formal enterprises. Much of the welfare aid failed to reach its destination. Budgets were not fully spent. The government was slow to secure vaccines and became embroiled in a scandal after revelations that top officials were secretly inoculated first.

According to the latest data, 3.3 million Peruvians were thrown back into (official) poverty by the pandemic, while another 11m are on the brink.  As Castillo says; “People don’t know there are thousands of children living in poverty and now, due to the pandemic, in extreme poverty.”  Many Peruvians who considered themselves ‘middle-class’ and relatively better-off were also faced with impoverishment. 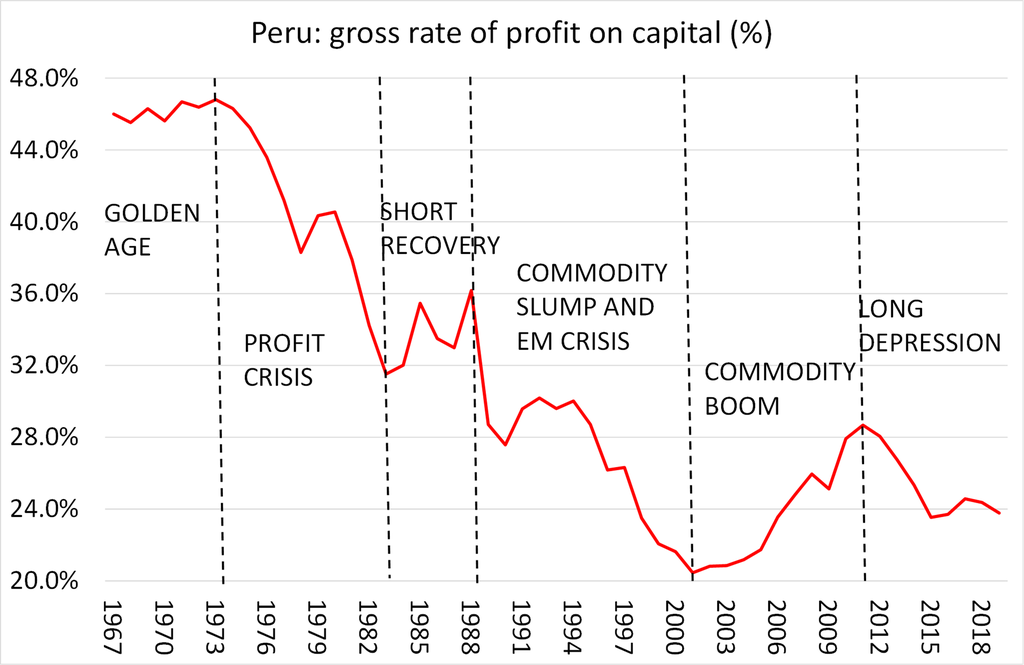 These up and downs in profitability were more extreme in Peru compared to other Latin American economies.  The level of profitability up to 2012 was higher in Peru than elsewhere in the region but dropped more in the commodity price slump afterwards. 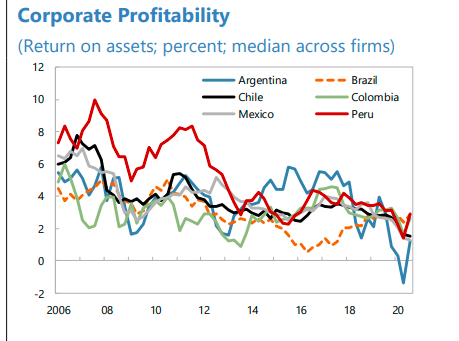 Indeed, there is a strong positive correlation between movements in world copper prices and profitability (0.26) and real GDP growth (0.32) in Peru.

The irony is that whoever wins today’s election may actually be able to preside over a relative recovery in Peru’s economic fortunes.  Real GDP may recover to pre-pandemic levels by this time next year.  And longer term, Peru’s commodity-based economy may sustain some new growth, if not at previous pandemic rates. 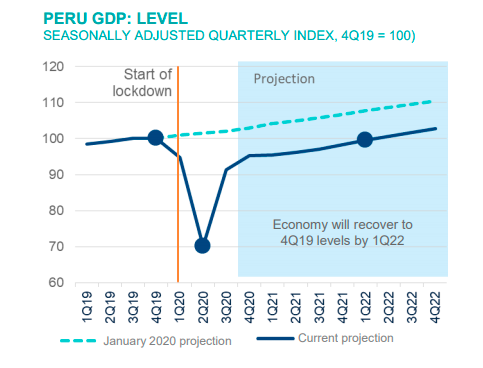 That’s because world copper prices are now at a ten-year high. 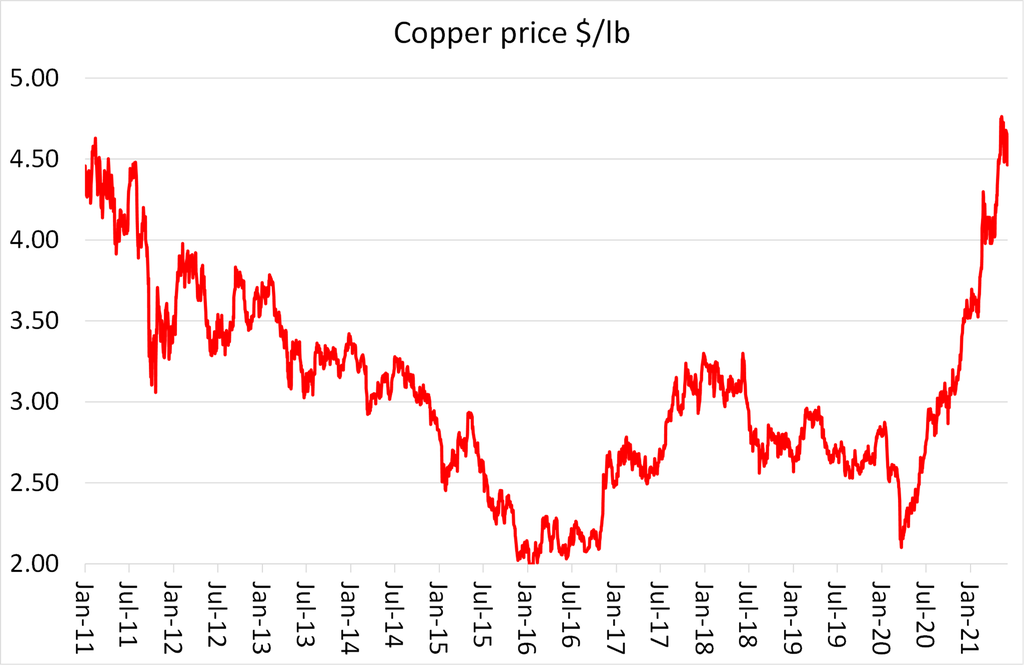 This price rise is being driven by global economic recovery, particularly in China, a major export destination, but also by long-term structural demand for copper as a key component in the fast expansion of electric vehicles and transport.

So perhaps the fear of Peru becoming Venezuela, if Castillo wins, as the ‘middle class’ believe and the capitalist media promote, will prove false.  After all, “Castillo’s is not the Cuban or Venezuelan model,” said Pedro Francke, a university economics professor who is advising him. “He is much more in the image of [former Bolivian president] Evo Morales.”