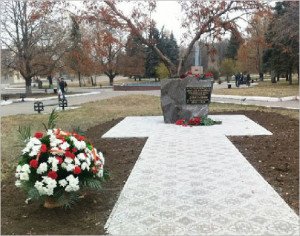 Monument in Debaltseve to those who fell defending the city in 2014-15, consecrated on Nov 4, 2015 (photo by Politnavigator)

A monument to the insurgents and civilians who died in the war with the Ukrainian army in 2014-15 was solemnly opened on November 4, 2015 in Debaltsevo, a small city on the territory of the Donetsk People’s Republic. The ceremony was presided by the leaders of the DPR, the head of the Debaltsevo city administration and deputies to the DPR legislature. Many hundreds of local citizens took part.

Alexander Zakharchenko, the head of the DPR, gave an address to the ceremony in which he stated that the Donetsk People’s Republic should honour those who defended with arms their city and their children. A solemn liturgy was served by the provost of the Alexander Nevski Orthodox Church of Debaltsevo. He stated, “We are gathered here, on the Day of Our Lady of Kazan, for a prayer to honour our dead warriors who sacrificed their lives for our land.” 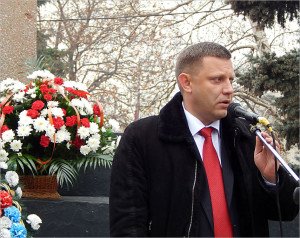 The plaque on the monument reads: “Eternal memory to the brothers and sisters who gave their lives for the liberation of Debaltsevo from Ukrainian aggressors, 2014-2015”. The news is reported by the Donetsk News Agency (DAN). It refers to Debaltsevo as a “hero city” for having resisted an “occupation” by Ukrainian aggressors, a title reminiscent of the Soviet tradition of bestowing the title on cities that became centres of active fighting against Nazi invaders during WWII.

The pro-Ukraine information agency OstroV, which publishes analysis of events in Donetsk and Lugansk in Russian language, published a short item on the November 4 ceremony which was taken from DAN. OstroV calls DAN a “separatist” agency. The item on OstroV’s website has a telling title: “The height of cynicism! Ringleaders of the “DPR” opened in Debaltsevo a monument to civilians that they themselves killed brutally”. Then the agency proceeds to explain that while “liberating” (its own quotation marks) Debaltsevo from the Ukrainian army, the rebels shelled the city with heavy weaponry, killing a large number of civilians.

Quoting U.S. Ambassador to the United Nations Samantha Power, the OstroV agency explains that about 500 corpses of civilians were found in basements of Debaltsevo. The victims were said to be seeking cover from the shelling of their “liberators” (quotation marks by the agency), that is DPR forces. OstroV does not say when Power made this claim, nor on what occasion. It also quotes her as saying that civilians were risking their lives by either hiding in basements or fleeing the city because roads were also shelled by the “terrorists” of the DPR. One wonders why OstroV does not quote Ukrainian sources and instead relies on the US representative for finding out what is happening in Ukraine.

The short OstroV short article states that the leaders who spoke at the solemn opening of the Debaltsevo monument on November 4 “traditionally shifted the responsibility for their crimes onto Ukraine”.

“The monument… is located in a public promenade adjacent to the occupation ‘city administration’ of Debaltsevo”, informs OstroV. Again, quotes around the “city administration” and the qualification “occupation” clearly show the agency’s interpretation of the DPR as “terrorists” who took Debaltsevo by force and hold now all the citizens as hostages. Not only do the terrorists blame the Ukrainian army for their crimes, they purportedly shell their own positions because they do not give a damn for the lives of civilians! These terrorists are so wicked and cynical in their perfidity that they even erect a monument to their own victims!

The authors of the OstroV website report did not bother to explain why the DPR “ringleaders” would engage in such an act of commemoration. Indeed, why did they stage a commemoration?

When and where in human history have perpetrators erected monuments to their victims? There are innumerable instances of commemoration of victims by their relatives, social groups representing the victimized strata of the population, or the state claiming to represent them. But I have never heard of an instance where an executioner would erect a monument to his own victims, going so far as to call them “brothers and sisters”! But these Russia-backed terrorists from the DPR are so evil that their cruelty is inhumane and transcends our common understanding of human motivation. Or so we are expected to believe.

That is the only plausible explanation of the DPR leaders’ act from the OstroV point of view. The publication does not spell this out, but it is easily discernible from the way in which it presented the news.

The aforementioned title of the OstroV report strikes me as yet another example of the dehumanization of Donbas residents by the Ukrainian government and much of the country’s media. I analyzed this phenomenon in some detail in my presentation at the 2015 annual conference of the Canadian Association of Slavic Studies and at the inaugural conference in Winnipeg in September 2015 of the Geopolitical Economy Research Group (GERG) at the University of Manitoba in Winnipeg in September 2015. You can read my presentation here at the GERG conference website.

Pro-Western, “civilized” Ukrainians deny the DPR insurgents their humanity. It is made crystal clear in Ukrainian media interpretations who is the good and who is the bad. Pro-Western Ukrainians who claim to respect human life and freedom of opinion cannot accept any suggestion that the DPR leaders and the population of the DPR sincerely mourn their fellow combatants and citizens who died in the civil war in Donbas. People on all sides died from the shelling of the Ukrainian army and, yes, also from shells fired by DPR forces. This was a war in which casualties were unavoidable, tragic as that was. But it is exceedingly rare to find reported in Ukrainian media that this civil war was unleashed by Kyiv government and brought to the Donbas homeland precisely because Euromaidan Kyiv could not tolerate dissenting opinion there.

OstroV’s coverage of the opening of a monument in Debaltsevo is an example of such blindness and non-respect of the Other. It cannot see that the DPR is a legitimate expression of political self-determination, not a “terrorist” project imposed on the population by “Russia-backed rebels”. OstroV does not mention that some 500 people were present at the November 4 ceremony in Debaltsevo, and that after the opening of the new monument, the procession then went to the Memorial of Eternal Glory consecrated to those who died in the Great Patriotic War. On that day, for the first time in many years, the Eternal Flame was relit thanks to the efforts of the local authorities. The head of the DPR, Alexander Zakharchenko, spoke and gave thanks to the veterans still alive and those who died for passing to the generations that follow them the spirit and strength with which they fought in the Great Patriotic War.

The speech by Zakharchenko is but one of numerous official proclamations of the DPR which trace a continuity between the present-day combatants of Donbas and their grandfathers and great grandfathers who defeated Nazi Germany in the Great Patriotic War. As the Soviet army fought 70 years ago, today the DPR army is fighting against Ukrainian extreme nationalists who were Nazi allies in the past and who now want to invade Donbas and to destroy its historic memory. Present-day civilians and insurgents to whose memory the monument in Debaltsevo is dedicated died for victory in this fight.

In today’s Maidan Ukraine, celebrations of the Soviet victory in WWII are fading away. In the memory politics of the new Euromaidan Ukraine, the notion of the Great Patriotic War is increasingly called a myth. And yet, this “myth” remains a fundamental building block of the collective identity of millions of Ukrainian citizens. The heroism and patriotism of Soviet Ukrainian soldiers, praised in history manuals and glorified in song, is now dissolved into an interpretation of Ukraine as having been caught between twin evils –Nazi Germany and the Stalin-led Soviet Union (read present-day Russia). New commemoration rituals have being created in Ukraine which are copied from European habits with little or no bearance on Ukrainian history. This year, in addition to marking May 9, traditional Victory Day in Ukraine, May 8 was officially marked for the first time in Ukraine’s history as a day of WW2 memory and reconciliation.

I doubt very much that this new commemoration date can assist reconciliation for a country that is divided not only by the memory of the past but also by divergent visions of the future. Donbas does not want to integrate into Europe, as many in the rest of Ukraine seemingly want. And for that dissenting opinion, pro-European Ukraine is dehumanizing Donbas. As long as the Ukrainian political and intellectual elite refuse to recognize Donetsk and Lugansk residents as human beings with views and values different from their own but no less authentic, there will be no peace in Ukraine.

(1) Debaltsevo is a small city, population 25,000, in the east of the Donetsk oblast of Ukraine, near the border with the Luhansk oblast. It is a strategically vital road and railway junction. The city became the location of very heavy fighting between Ukrainian armed forces and militias and the DPR insurgency in the summer of 2014. Ukraine succeeded in capturing it for a time. In January of 2015, after Ukraine had renewed a military offensive against Donetsk and Lugansk, its forces became vulnerable after they had overextended themselves in and around Debaltsevo. A counteroffensive by DPR forces succeeded in recapturing the city on February 18, 2015, destroying the occupying Ukrainian forces who suffered hundreds of casualties. This fight became known as the Battle of Debaltsevo.

(2). It is stated on the OstroV website that it is funded by the National Endowment for Democracy, the Media Development Fund of the US Embassy to Ukraine, and the International Renaissance Foundation, whose founder and sponsor is George Soros. It is part of the Polish-Canadian Program of support for democracy, co- financed by the Department of Foreign Affairs of the Polish Republic and the Department of Foreign Affairs, Trade and Development of Canada.

Read all of Halyna Mokrushyna’s article here on her author page on New Cold War.org. 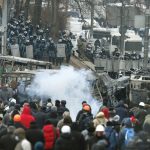