HDP rejects accusation of “treason” over its visit to Moscow

Turkish Prime Minister Ahmet Davutoğlu has reprimanded both the main opposition Republican People’s Party (CHP) and the Peoples’ Democratic Party (HDP) for allegedly siding with other countries whenever their relations with the government of Turkey deteriorate. 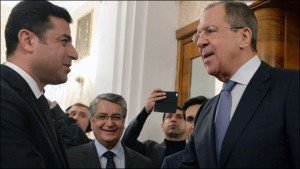 “The HDP co-chair’s statement delivered in Russia suggesting that ‘Turkey shooting down the Russian airplane was wrong,’ was exactly scandalous and exactly treason. During a process when Russian airplanes have been bombing innocent Turkmens, innocent Arabs and innocent Kurds in Azaz, Aleppo, Idlib and Bayırbucak, running to Russia and declaring support is openly betraying the nation. This is naked carelessness,” Davutoğlu said on Dec. 24, referring to HDP co-chair Selahattin Demirtaş’s recent remarks.

“We criticized the actions of the government when the Russian plane was shot down,” Demirtaş was quoted as saying by Russian news agencies during a meeting with Russian Foreign Minister Sergei Lavrov that took place in Moscow on Dec. 23.

Read also: HDP remains defiant on Russia policy, as Turkish PM zealously attacks, Hurriyet Daily News, Dec 25, 2015
… Upon his return from Moscow late on Dec. 24, Demirtaş underlined that his visit to the Russian capital was planned long ago before the crisis…

Demirtaş became the first high-profile Turkish figure to visit Moscow since Turkey shot down a Russian warplane on the Turkish-Syrian border on Nov. 24. The incident sparked the biggest crisis in ties between Moscow and Ankara since the end of the Cold War and saw Moscow introduce a raft of economic sanctions against Turkey.

While recalling how the CHP sent delegations to Egypt and Syria during times of heightened tensions in their relations with Turkey, Davutoğlu also touched upon remarks reportedly delivered by a deputy of the CHP, who allegedly said Islamic State of Iraq and the Levant (ISIL) militants had delivered deadly sarin gas to Syria through Turkey.

“Unfortunately, the CHP leader [Kemal Kılıçdaroğlu] and administration hasn’t shown the sufficient reaction to these remarks, which were open treason and an insult that harmed Turkey’s reputation. On the contrary, Mr. Kılıçdaroğlu said, ‘We will not let this lawmaker be sacrificed.’” Davutoğlu said. “Such a lawmaker befits you,” he added.

Meanwhile, the Peoples’ Democratic Party (HDP) swiftly and fiercely reacted against Prime Minister Ahmet Davutoğlu’s charge of “treason” against them on the grounds they had not sided with his government’s view concerning recent tension between Ankara and Moscow, calling the prime minister’s stance “unacceptable and inconsistent.”

“Mr. Prime Minister Ahmet Davutoğlu’s remarks concerning diplomatic meetings that were held in Moscow by our co-leader, Mr. Selahattin Demirtaş and the accompanying delegation as saying the HDP co-chair’s statement delivered in Russia… ‘was exactly scandalous and exactly treason,’ absolutely cannot be accepted,” the HDP said in a written statement released on Dec. 24.

“The entire world knows how our Foreign Minister [Mevlüt Çavuşoğlu] endeavored to meet [Russian Foreign Minister] Lavrov. We know how our President [Recep Tayyip Erdoğan] strived to meet [Russian President Vladimir] Putin. Officials said ‘We would not have downed the jet if we knew it had belonged to Russia’ right after the incident. So, there is awareness that something’s wrong. The fact that similar remarks delivered by our co-chair were associated with ‘treason’ reminds us that this country declared war against us through newspapers’ front-pages and we haven’t even noticed it. You can’t follow a foreign policy with an understanding such as ‘If someone gets to meet Lavrov, that should only be us,’” Bilgen told reporters on Dec. 24.

Demirtaş visited Moscow on Wednesday and met with Russian Foreign Minister Sergey Lavrov for talks. Speaking at the start of the meeting, he said the downing of the Russian warplane was “not right.”

“They take sides with whoever Turkey is facing a crisis with. Demirtaş saying in Moscow that Turkey’s downing of the Russian jet was wrong is a total disgrace and treason,” Davutoğlu told a meeting of businessmen in Ankara.

“Our main duty is to raise our voice against Russian cruelty. Supporting Russia while it kills civilians in Syria is treason not only against this country but also against humanity.”

Responding to Davutoğlu, the HDP said the prime minister’s remarks are “unacceptable.”

“It is, to say the least, a contradiction that the [ruling Justice and Development Party] AK Party government sees HDP contacts with the Russian government as treason while it continues to maintain such contacts,” said Nazmi Gür, a deputy chairman of the party who is in charge of foreign relations. Gür also said the HDP has characterized the downing of the Russian jet as a “mistake” since the incident and insisted that the HDP would never engage in any dialogue that would put the interests of the people of Turkey at risk.

Gür also lamented that the government was trying to undermine HDP efforts to ease tension with Russia and ensure that the people of Russia and Turkey were not hurt by the diplomatic crisis, and criticized it for blocking alternative foreign policy channels.

Demirtaş also defended his remarks in Moscow. “I will apologize if they [the government] can state a single benefit for Turkey in the downing of the Russian jet,” he said later in the day as he spoke at a news conference in İstanbul upon his return from Russia.

Turkish fighter jets shot down a Russian Su-24 after it violated Turkish airspace near the border with Syria on Nov. 24, sparking a diplomatic crisis with Russia. Moscow, which denies that the Russian aircraft entered Turkish airspace, has promised retaliation and demanded Turkey offer an apology and compensation.

Demirtaş’s visit to Moscow came as high-level contacts between the two countries have come to a near halt amid Russian accusations that President Recep Tayyip Erdoğan and his family benefit from an oil trade with the Islamic State of Iraq and the Levant (ISIL), a claim denied by Erdoğan and the government.

During his meeting with Lavrov, Demirtaş criticized the decision to shoot down the plane but added that the crisis should not be allowed to hurt the Turkish and Russian people. “The people of Turkey have no responsibility in the current crisis,” he said.

“There could be crises between countries but we always favor that diplomatic channels be kept open and problems be solved through dialogue,” he said.

Lavrov said Russian-Turkish relations were not positive at the moment but added that this does not apply to the Turkish people. He also said Russia, which has been conducting air strikes against groups fighting Syrian President Bashar al-Assad, is ready for “active cooperation” with those who fight against ISIL on the ground, referring to the Kurds fighting against ISIL in Iraq and Syria.

Davutoğlu also lashed out at the leader of another opposition party, the Republican People’s Party (CHP), in a controversy over alleged remarks by one of its deputies vowing to stand by Iran in a hypothetical war against Turkey and the deputy’s statement that Turkey was used as a transit point for sarin gas heading to ISIL in Syria.

CHP deputy Eren Erdem has been accused by President Erdoğan, government officials and the pro-government media of “treason” for an interview with Russia Today in which he talked of a court indictment that includes claims that operatives from radical Syrian groups acquired substances used in the production of sarin gas in Turkey and transferred them to Syria via Turkey. He was also attacked for allegedly writing on Twitter that he would fight alongside Iran in a Turkish-Iranian war.

Responding to the accusations, Erdem said he repeated in the Russia Today interview claims that were contained in a court indictment prepared in 2013 after the arrest of 13 suspects, which said individuals in Turkey helped transfer sarin gas through Turkey to Syria by using their connections with ISIL members.

As to the tweet about Iran, which is from 2011, Erdem says he did not say the sentence but that it was a quote from an Islamist speaker at a conference that he was attending.

Without naming Erdem, Davutoğlu repeated the accusations against the CHP deputy and criticized CHP leader Kemal Kılıçdaroğlu for defending Erdem.

“What does it mean to say ‘I would support whatever country fights against Turkey? This mentality is no different than that of the collaborators with the foreign invaders during [Turkey’s post-World War I] War of Independence,” Davutoğlu said. “Unfortunately the CHP chairman and the CHP administration have failed to sufficiently react against these treasonous and slanderous remarks that defame Turkey,” he added. 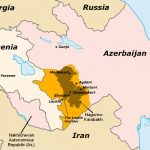