In March 2015, television channel ‘Russia 24’ broadcast a 30-minute film produced by young Russian filmmakers about the effects of the war in eastern Ukraine on the people who live there.

The film describes the destruction caused by nearly one year of artillery bombardments and ground attacks by the Ukrainian armed forces and militias against the people of Donetsk and Lugansk. It records the attitudes of people living there towards the country, Ukraine, and government in Kyiv that has waged war on them.

The film is titled ‘People Live Here’ The filmmaker explains at the beginning, “People asked us, ‘Who are you? Why do you come here? Are you journalists?’ We answered, no, we are not journalists. We are here to film the truth.”

‘People Live Here’ is sub-titled in English, French, Portugese and German. You can watch it on Y0uTube, or click the screen here: 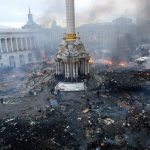 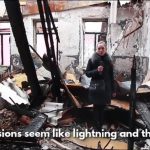 Students in Lugansk appeal for peaceFilms including documentaries, Ukraine, Video