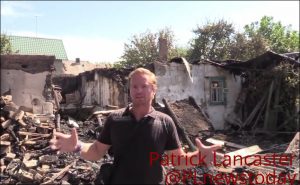 Videographer Patrick Lancaster has posted three videos, each three to four minutes in length, documenting the aftermath of shellings against homes in Donetsk, eastern Ukraine by the armed forces of Ukraine. The shellings took place on the night of August 29-30, 2016.The videos are broadcast on his YouTube channel