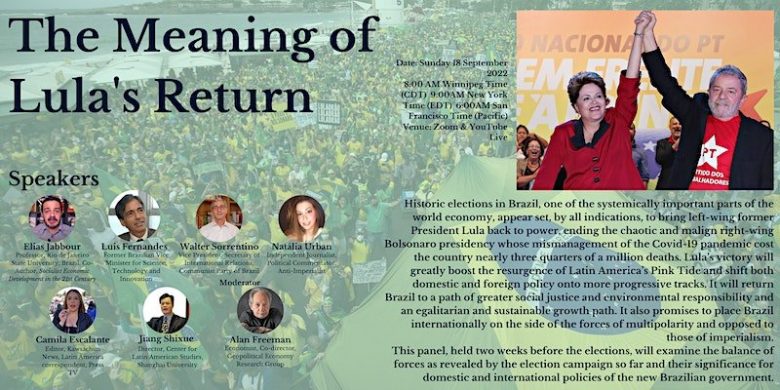 A panel organised by The International Manifesto Group on September 18, 2022:

Two weeks ahead of historic elections in Brazil, this panel discusses the highly anticipated return of Lula Da Silva and its implications and the opposing ideas provoking the clash between US hegemony and anti-US forces throughout the hemisphere.
________________________

Historic elections in Brazil, one of the systemically important parts of the world economy, appear set, by all indications, to bring left-wing former President Lula back to power, ending the chaotic and malign right-wing Bolsonaro presidency whose mismanagement of the Covid-19 pandemic cost the country nearly three quarters of a million deaths. Lula’s victory will greatly boost the resurgence of Latin America’s Pink Tide and shift both domestic and foreign policy onto more progressive tracks. It will return Brazil to a path of greater social justice and environmental responsibility and an egalitarian and sustainable growth path. It also promises to place Brazil internationally on the side of the forces of multipolarity and opposed to those of imperialism.

This panel, held two weeks before the elections, will examine the balance of forces as revealed by the election campaign so far and their significance for domestic and international policies of the new Brazilian government.

Elias Jabbour is Adjunct Professor at the Faculty of Economic Sciences, Postgraduate Programs in Economic Sciences, and International Relations at the State University of Rio de Janeiro. He is co-author of Socialist Economic Development in the 21st Century.

Luis Fernandes was the Minister for Science, Technology and Innovation under Presidents Lula Da Silva and Dilma Rousseff. He is a professor at the International Relations Institute (IRI) and the Brics Policy Center (BPC) of the Pontifical Catholic University of Rio de Janeiro (PUC-Rio), as well as adjunct professor at the Federal University of Rio de Janeiro (UFRJ). He has PhD and Master’s degrees in Political Science from the Instituto Universitário de Pesquisas do Rio de Janeiro (IUPERJ) and a Bachelor of Science in Foreign Service (BSFS) degree from Georgetown University (USA). His research areas cover topics related to the Political Economy of International Relations (with special emphasis on development and innovation issues), and to power shifts in the international order. He has been designated to different government positions in Brazil over the past two decades, including those of Deputy Minister for Science and Technology, President of the Brazilian Innovation Agency (FINEP), Scientific Director of the Rio de Janeiro State Foundation for the Endowment of Research (FAPERJ), Special Advisor to the Minister of Defense and Deputy Minister for Sports (where he served as the government’s executive coordinator for the preparation and organization of the 2014 World Cup and the 2016 Olympic and Paralympic Games).

Camila Escalante is the woman behind Kawsachun News, a media outlet based in Bolivia, and also known for her correspondent work reporting around Latin America. She is a Latin American Correspondent for Press TV. She co-hosts Latin America Review, a new weekly program/podcast where you can hear interviews with Latin American and Caribbean leaders and analysts in English. Camila’s family are FMLN revolutionary former combatants. She has previously been based in Quito, Havana and Caracas. She is currently based in La Paz and reporting on campesino movements across the continent.

Natália Urban is a freelance journalist and anti-imperialist political analyst.

Walter Sorrentino is Vice-President and International Relations Secretary of the Communist Party of Brazil.

Moderator – Alan Freeman is the co-director, with Radhika Desai, of the Geopolitical Economy Research Group (GERG) at the University of Manitoba. He was an economist at the Greater London Authority between 2000 and 2011, where he held the brief for the Creative Industries and the Living Wage. He wrote The Benn Heresy, a biography of British politician Tony Benn, and co-edited three books on value theory. He is honorary life vice-president of the UK-based Association for Heterodox Economics and a Vice-Chair of the World Association for Political Economy. 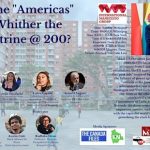 Summit of the “Americas” vs. CELAC: Whither the Monroe Doctrine @ 200?International Manifesto Group, Latin America and the Caribbean, Summit of the Americas, Video 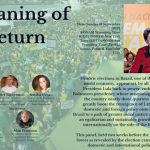