Pandering to Christian Zionism: Trump Outreach on Display in Washington 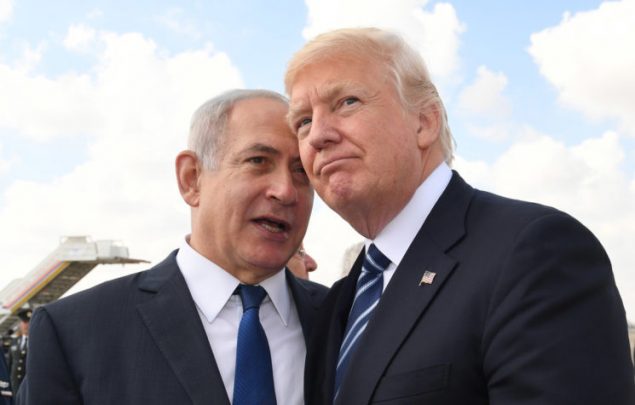 Praise for Israel and condemnation for Iran – many see war as inevitable – but in this case the rhetoric comes from five senior officials in the Trump camp and a Christian Zionist evangelical group.

In Washington on the weekend after the Fourth of July, Israel was praised and Iran was condemned in the strongest terms, with a bit of a call to arms thrown in to prepare the nation for an inevitable war. It might just seem like a normal work week in the nation’s capital, but this time around there was a difference. The rhetoric came from no less than five senior officials in the Trump Administration and the audience consisted of 5,000 cheering members from the Christian Zionist evangelical group called Christians United for Israel (CUFI).

Christian Zionism is not a religion per se, but rather a set of beliefs based on interpretations of specific parts of the Bible – notably the book of Revelations and parts of Ezekiel, Daniel, and Isaiah – that has made the return of the Jews to the Holy Land a precondition for the Second Coming of Christ. The belief that Israel is essential to the process has led to the fusion of Christianity with Zionism, hence the name of the movement. The political significance of this viewpoint is enormous, meaning that a large block of Christians promotes and votes for a non-reality based foreign policy based on a controversial interpretation of the Bible that it embraces with considerable passion.

It would be a mistake to dismiss CUFI as just another group of bible-thumpers whose brains have long since ceased to function when the subject is Israel. It claims to have seven million members and it serves as a mechanism for uniting evangelicals around the issue of Israel. Given its numbers alone and concentration is certain states, it therefore constitutes a formidable voting bloc that can be counted on to cast its ballots nearly 100% Republican, as long as the Republican in question is reliably pro-Israel. Beyond that, there are an estimated 60 million evangelical voters throughout the country and they will likely follow the lead of groups like CUFI and vote reflecting their religious beliefs, to include Trump’s highly visible support for the Jewish state.

Trump’s reelection campaign is reported to be already “…developing an aggressive, state-by-state plan to mobilize even more evangelical voters than supported him last time.” This will include, “voter registration drives at churches in battleground states such as Ohio, Nevada and Florida.” Without overwhelming evangelical support, Trump reelection in 2020 is unlikely, hence the dispatch of all available White House heavyweights to CUFI’s annual summit at the Washington Convention Center.

Though it is an organization that defines itself as Christian, CUFI makes no effort to support surviving Christian communities in the Middle East as most of them are hostile to Israel. The group also supports war against Iran as a precursor to total global conflict. Hagee has explained that “The United States must join Israel in a pre-emptive military strike against Iran to fulfill God’s plan for both Israel and the West… a biblically prophesied end-time confrontation with Iran, which will lead to the Rapture, Tribulation, and Second Coming of Christ.”

CUFI operates out of the Cornerstone Church in San Antonio Texas. It was founded at the church in 2006 and is headed by John Hagee, a leading evangelical who has been courted both by the Trump Administration and by Israel itself, which presented him with a a Lear business yet complete with a crew so he would be able to do his proselytizing in some comfort. He frequently appears at commemorations in Israel, is a regular at the annual AIPAC meeting and has been a guest at the White House. He was present at the Trump administration’s ceremony last year when it moved the US Embassy to Jerusalem and gave a speech. He has said that “there has never been a more pro-Israeli president than Donald Trump.”

Present at the CUFI summit were Vice President Mike Pence, Secretary of State Mike Pompeo, National Security Advisor John Bolton, US Ambassador to Israel David Friedman, and US negotiator in the Middle East Jason Greenblatt. Lest there be any confusion, the White House was represented by two Christian Zionists, two Jewish Zionists and John Bolton, who has been variously described. All five have been urging a military response against Iran for its alleged “aggression” in the Middle East. Israeli Prime Minister also addressed the conference via videolink, with his similar “analysis” of the Iranian threat. There were also a number of Republican Senators present, to include Ted Cruz, Marco Rubio, Roy Blunt and Tim Scott.

The speeches were all pretty much the same but perhaps the most suggestive was the 2,000 word plus exhortation delivered by Pompeo. His presentation was entitled “The US and Israel: a Friendship for Freedom.” He asked, in a speech full of religious metaphors and biblical references, his audience to “compare Israel’s reverence for liberty with the restrictions on religious freedom facing Christians and people of all faiths throughout the rest of the Middle East,” where “if a Muslim leaves Islam it is considered an apostasy, and it is punishable indeed by death.”

Pompeo was more interested in stirring up his audience than he was in historical fact. He said “In Iraq, Syria, and other countries in the region, the last remnants of ancient Christian communities are at near-extinction because of persecution from ISIS and other malign actors. And just one example: before 2003, there were an estimated 1.5 million Christians living in Iraq. Today, sadly, almost a quarter of a million.”

Pompeo, whose grasp of current events appears to be a bit shaky, did not mention two of the principal reasons that Christianity has been declining in the region. First and foremost is the Iraq War, started by the United States for no good reason, which unleashed forces that led to the destruction of religious minorities. Second, he did not note the constant punishment delivered by Israel on the Palestinians, which has led to the departure of many Christians in that community. Nor did he say anything about the reverse of the coin, Syria, where Christians are well integrated and protected by the al-Assad government which Pompeo and Bolton are seeking to destroy to benefit Israel.

The Secretary of State also delivered the expected pitch for four more years of Donald Trump, saying “But thank God. Thank God we have a leader in President Trump – an immovable friend of Israel. His commitment, his commitment – President Trump’s commitment is the strongest in history, and it’s been one of the best parts of my job to turn that commitment into real action.”

But it has to be Pompeo’s conclusion that perhaps should be regarded as a joke, though it appears that no one in the audience was laughing. He said “Our country is intended to do all it can, in cooperating with other nations, to help create peace and preserve peace [throughout] the world. It is given to defend the spiritual values – the moral code – against the vast forces of evil that seek to destroy them.”

It was a reiteration of Pompeo’s earlier “America is a force for good” speech delivered in Cairo in January. Nobody believed it then and nobody believes it now, given what has been actually occurring over the past 18 years. It would be interesting to know if Pompeo himself actually thinks it to be true. If he does, he should be selling hot dogs from a food truck rather than presiding as Secretary of State.

So, the bottom line is that the Trump Administration pandering to Hagee and company is shameful. Christian Zionist involvement in American politics on behalf of the Washington’s relationship with Israel does not serve any conceivable US national interests unless one assumes that Israel and the United States are essentially the same polity, which is unsustainable. On the contrary, the Christian Zionist politicizing has been a major element in supporting the generally obtuse US foreign policy in the Middle East region and vis-à-vis other Muslim countries, a policy that has contributed to at least four wars while making the world a more dangerous place for all Americans. Christian Zionist promoted foreign policy serves a particularly narrowly construed parochial interest that, ironically, is intended to do whatever it takes to bring about the end of the world, possibly a victory for gentlemen like Pastor John Hagee if his interpretation of the bible is correct, but undeniably a disaster for the rest of us.