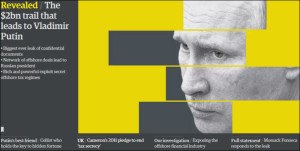 How The Guardian in the UK headlined its Panama Papers coverage

You’d be forgiven for thinking, given the accompanying image, that the Panama Papers had something to do with Vladimir Putin. Maybe he was a kingpin of the whole thing. Maybe he was, at least, among the 12 world leaders implicated in various shady financial practices – along with Petro Poroshenko, the saviour of Ukrainian democracy, and the King of Saudi Arabia (dad of the recent Légion d’Honneur winner).

Luke Harding, a bastion of ethical journalism (and not at all a paranoid lunatic), has churned out two articles in The Guardian  totaling over 5000 words, each using the word “Putin”, almost as often as they use the phrases “allegedly”, “speculation suggests”, “has been described as” and “may have been”.

Neither of his articles mentions by name any of the 12 world leaders, past and present, actually identified in the documents, nor do they mention David Cameron’s dad, who is also in there. No, they focus on a cellist friend of Putin’s, talk about his daughter’s marriage, and include an awful lot of diagrams with big arrows that point at pictures of…Vladimir Putin. This is, apparently, all evidence of…something.

…I’m not sure what, but it will probably be discussed at length in the “book” Luke Harding is probably planning to publish in a couple of weeks. That’s if the NSA don’t delete it all while he’s typing.

The only important, or even true, phrase Harding uses appears at the very top of this article:

That’s a minor detail of course, I mean, they have a video: “How to hide $1 billion”. The title screen is, you guessed it, a photo of Putin. Presumably because he is SO GOOD at hiding his billions that, unlike Petro Poroshenko and David Cameron’s dad:

So there you go. The Guardian falls into self parody, pasting up a massive picture, a misleading headline and 5000 words (that Harding presumably copied from someone else), at the merest suggestion of a tenuous connection to the Russian president. 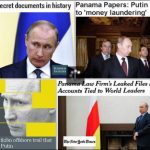 The Panama Papers expose the hidden wealth of the world’s super-richMedia critique, Multipolarity