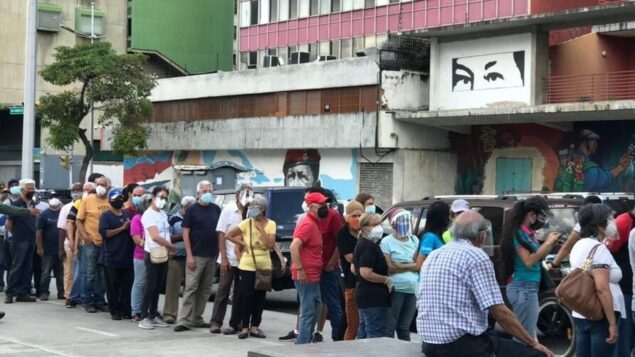 Venezuelans queue to get vaccinated against Covid-19 in central Caracas. (Carolina Alcalde / VOA)

Venezuela’s efforts at the Copa America football tournament have also been derailed after 15 players and staffers caught the virus, prompting calls for an investigation.

The Venezuelan government has accused Washington of lobbying international banks to block payments to the United Nations’ COVAX program, hindering the supply of Covid-19 vaccines.

The accusations come after COVAX authorities informed Venezuela’s UN Ambassador Héctor Constant Rosales that the Swiss-based UBS Bank had “blocked” and is “investigating” at least four outstanding transfers. COVAX reported a US $10 million outstanding deficit to complete Venezuela’s $120 million payment for 11 million vaccine doses, which cannot be dispatched until the funds are received. Caracas has reiterated that the full amount has been sent.

While the COVAX letter does not specify the cause of the bank’s decision to block the funds, an unnamed UBS spokesperson reportedly told The Associated Press that the bank “adheres to applicable legal and regulatory requirements in all jurisdictions, including respective sanction regimes such as the sanctions currently imposed by Switzerland, the UK, the EU and the United States.”

The stalled payments were likewise confirmed by Pan-American Health Organization Director of Health Emergencies Ciro Ugarte last week. Ugarte had previously indicated that the vaccines would start arriving in June and went on to confirm that once full payment is received, Venezuela will be “made a priority.” He offered no timescale for the resolution of the blocked payments.

In recent years, Washington has blocked, frozen or seized a number of Venezuelan assets and payments alongside wide-reaching sanctions against the Latin American country. The measures have included the seizure of Venezuela’s US-based oil corporation CITGO in 2019, as well as transferring US $342 million from a Venezuelan Citibank account to the US Federal Reserve. Since 2017, the US has also forced all banks to issue a blanket red alert fraud warning for any transaction involving Venezuelan resources or actors.

The UK, EU and Switzerland have likewise applied sanctions regimes against Caracas to differing degrees, with measures including asset freezes and travel bans. Both European and US sanctions have been condemned as “illegal” and “devastating” by the United Nations.

In response to UBS’s decision, President Nicolás Maduro demanded that his US counterpart Joe Biden authorize the release of the funds, arguing that the blocked payments constitute a “robbery.”

“One thing is an ideological and diplomatic difference with the US government, but the health of the people is quite another,” the president told reporters on Friday. Vice President Delcy Rodriguez echoed Maduro’s complaint and pointed the finger at US “lobby groups.”

The news has caused outrage in a range of Venezuelan and regional organizations, with the Bolivarian Alternative for the Peoples of Our America (ALBA) “repudiating” the “illegal” financial blockade.

For its part, the Communist Party of Venezuela (PCV) also denounced the bank’s decision, claiming that UN member states should not “remain passive” while “Venezuelans die because they don’t have access to vaccines in time (…) Intervention in our internal affairs has been turned into a weapon of mass destruction against millions of innocent people.”

While Venezuela continues to identify fewer Covid-19 cases than regional neighbours, cases have risen in recent months due to the arrival of the more contagious Gama (Brazilian) variant in March and the Alfa (UK) and C.37 variant (known as the Andean variant), which were both detected in the country last week. 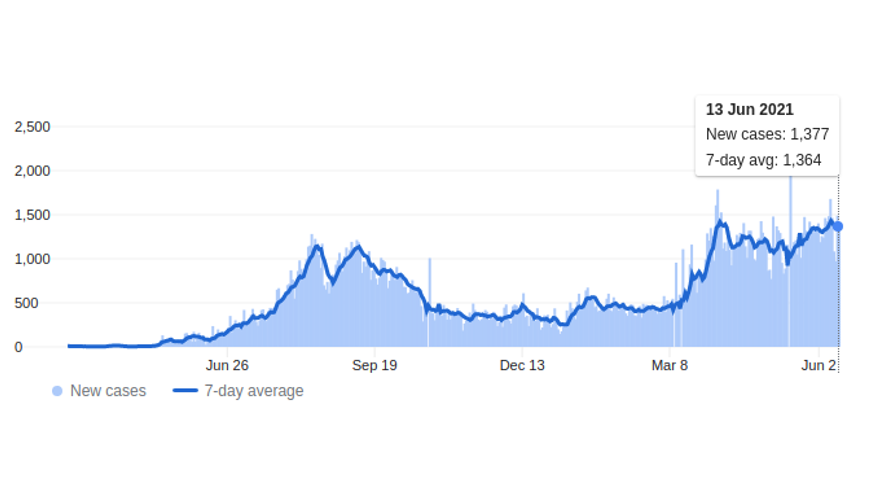 Apart from the 11 million vaccines purchased through COVAX, the government has looked to Russia, China and Cuba to help bypass the US-led blockade, setting the target of immunizing 70% of the population by Christmas.

Earlier this year, Caracas signed deals with Russia to purchase 10 million Sputnik V doses and an equal number of EpiVacCorona doses, and with Cuba for the Adbala and Soberana 02 vaccines. China has additionally donated 1.8 million doses.

Nonetheless, mass vaccination efforts have been slow with only anestimated 3.2 million doses arriving so far, including a further 500,000 Sputnik V doses on Saturday.

A coronavirus outbreak derailed Venezuelans preparations for the regional Copa América football tournament over the weekend after 15 players and staffers were forced to withdraw.

From Brazil, Venezuelan Football Federation (FVF) spokespersons informed supporters that eight players and four staffers had tested positive and were to be withdrawn from the competition. The news came a mere 24 hours before the tournament’s inauguration and Venezuela’s 3-0 defeat against the hosts.

The announcement followed the withdrawal of captain Tomás Rincón and defenders Wilker Ángel and Rolf Feltscher who failed to travel to Brazil after catching the virus in the days leading up to the tournament.

The fifteen players and staff members are currently isolated, with the majority reported to be without symptoms. The FVF was forced to urgently fly 15 standby players to Brazil in order to complete their Sunday squad. Two other teams have also reportedly suffered coronavirus outbreaks in their camps.

The Copa America was moved to Brazil with just two weeks’ notice after both a wave of protests and government human rights violations in Colombia and a Covid-19 surge in Argentina forced organizers to reconsider the co-hosts.

Despite sanitary controls, South America’s CONMEBOL football federation’s decision has come under fire and promoted calls for an investigation as Brazil continues to struggle to contain the pandemic and leads the region in both number of coronavirus cases and deaths.