By Ivan Katchanovski, posted on his Facebook page, Dec 2, 2015

The documentary film Winter on Fire: Ukraine’s Fight for Freedom has been shortlisted for Oscar in the documentary category. This film presents a typical version of the Maidan massacre and other cases of political violence during the ‘Euromaidan’ movement in Ukraine in late 2013, early 2014. All the cases of violence directed against Euromaidan are attributed to government forces and to agents provocateurs, while all revelations and videos of pro-Maidan snipers are ignored or edited out. 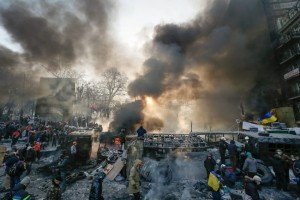 But this film also includes a previously undisclosed brief video in which a round of an automatic gunfire is heard on Maidan Square shortly before all police units fled the square on February 20, 2014 after suffering multiple casualties.

The film provides another illustration of international politics affecting representation and misrepresentation of foreign countries in Hollywood films. My study of all American, Canadian, and British movies depicting post-communist countries shows that Ukraine and Ukrainians were portrayed very negatively when Ukraine was not a U.S. ally. But the portrayal become relatively more positive after the pro-Western turn following the ‘Orange Revolution’ or 2004-05.

Similarly, when the Soviet Union was an ally of the U.S. during World War II, Mission to Moscow (1943) favorably presented Stalin and show trials during the Great Terror, and The North Star (1943) depicted in positive portrayals the anti-Nazi resistance by Ukrainian villagers and Soviet collectivization. These movies distorted the history of the Soviet mass terror and ignored the artificial famine [sic] in Ukraine, which followed the Soviet collectivization of agriculture and resulted in several million deaths in the Soviet Union.

The complete list of Oscar-nominated documentary films is below. News report on the nominations here.