In his Orwellian September 28, 2015 speech to the United Nations, President Obama said that if democracy had existed in Syria, there never would have been a revolt against Assad. By that, he meant ISIL. Where there is democracy, he said, there is no violence or revolution. 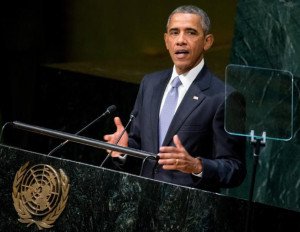 This was his threat to promote revolution, coups and violence against any country not deemed a ‘democracy’. In making this hardly-veiled threat, he redefined the word in the vocabulary of international politics. Democracy is the CIA’s overthrow of Mossedegh in Iran to install the Shah. Democracy is the overthrow of Afghanistan’s secular government by the Taliban against Russia. Democracy is the Ukrainian coup behind Yats and Poroshenko. Democracy is Pinochet. It is “our bastards”, as Lyndon Johnson said, with regard to the Latin American dictators installed by U.S. foreign policy.

A century ago, the word “democracy” referred to a nation whose policies were formed by elected representatives. Ever since ancient Athens, democracy was contrasted to oligarchy and aristocracy. But since the Cold War and its aftermath, that is not how U.S. politicians have used the term. When an American president uses the word “democracy”, he means a pro-American country following U.S. neoliberal policies, no matter if the country is a military dictatorship or its government was brought in by a coup (euphemized as a Color Revolution) as in Georgia or Ukraine. A “democratic” government has been re-defined simply as one supporting the Washington Consensus, NATO and the IMF. It is a government that shifts policy-making out of the hands of elected representatives to an “independent” central bank, whose policies are dictated by the oligarchy centered in Wall Street, the City of London and Frankfurt.

Given this American re-definition of the political vocabulary, when President Obama says that such countries will not suffer coups, violent revolution or terrorism, he means that countries safely within the U.S. diplomatic orbit will be free of destabilization sponsored by the U.S. State Department, Defense Department and Treasury. Countries whose voters democratically elect a government or regime that acts independently (or even simply seeks the power to act independently of U.S. directives) will be destabilized, Syria- style, Ukraine-style, or Chile-style under General Pinochet. As Henry Kissinger said, just because a country votes in communists doesn’t mean that we have to accept it. This is the style of the “color revolutions” sponsored by the National Endowment for Democracy.

In his United Nations reply, Russian President Putin warned against the “export of democratic revolution”, meaning by the United States in support of its local factotums. ISIL is armed with U.S. weapons and its soldiers were trained by U.S. armed forces. In case there was any doubt, President Obama reiterated before the United Nations that until Syrian President Assad was removed in favor of one more submissive to U.S. oil and military policy, Assad was the major enemy, not ISIL.

“It is impossible to tolerate the present situation any longer,” President Putin responded. Likewise in Ukraine: “What I believe is absolutely unacceptable,” he said in his CBS interview on 60 Minutes, “is the resolution of internal political issues in the former USSR Republics, through ‘color revolutions’, through coup d’états, through unconstitutional removal of power. That is totally unacceptable. Our partners in the United States have supported those who ousted Yanukovych. … We know who and where, when, who exactly met with someone and worked with those who ousted Yanukovych, how they were supported, how much they were paid, how they were trained, where, in which countries, and who those instructors were. We know everything.”[1]

Where does this leave U.S.-Russian relations? I hoped for a moment that perhaps Obama’s harsh anti-Russian talk was to provide protective coloration for an agreement with Putin in their 5 pm meeting. Speaking one way so as to enable oneself to act in another has always been his modus operandi, as it is for many politicians. But Obama remains in the hands of the neocons.

Where will this lead? There are many ways to think outside the box. What if Putin proposes to air-lift or ship Syrian refugees – up to a third of the population – to Europe, landing them in Holland and England, who are obliged under the Shengen rules to accept them?

Or what if he brings to Russia the best computer specialists and other skilled labor for which Syria is renowned, supplementing the flood of immigration from “democratic” Ukraine?

What if the joint plans announced on Sunday between Iraq, Iran, Syria and Russia to jointly fight ISIS – a coalition that US/NATO has refrained from joining – comes up against U.S. troops or even the main funder of ISIL, Saudi Arabia?

The game is out of America’s hands now. All it is able to do is wield the threat of “democracy” as a weapon of coups to turn recalcitrant countries into Libyas, Iraqs and Syrias.

[2] View the speech of Vladimir Putin to the United Nations General Assembly on September 28, 2015, 23 minutes, with English voiceover, here. Written text is here. 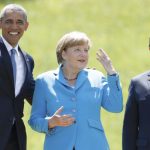 The power of false narrative over Ukraine and RussiaBackground, Media critique, Russia 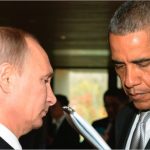