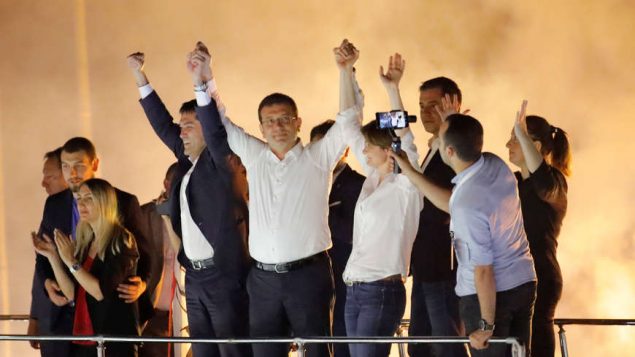 The cheers has scarcely faded on the streets of Istanbul and the print on congratulatory newspaper stories dried; indeed, tweets were still being posted when it became clear the Turkey’s president would not quietly accept his party’s defeat for the Istanbul mayor elections.

Istanbul’s mayor-elect Ekrem Imamoglu is due to be sworn in tomorrow after his thumping victory in the June 23 redo in what many observers see as a ground-shifting moment in Turkey’s turbulent politics.

Imamoglu invited citizens to attend the ceremony at the city hall on the European side of the city of 16 million via Twitter. “I await you all,” he said.

In preparation for the event, a giant banner picturing Turkey’s founder, Kemal Ataturk, was hoisted over the face of the Istanbul Municipality headquarters. Imamoglu had run on the ticket of the Republican People’s party (CHP), founded by Ataturk in 1923.

But even before Imamoglu reclaims the seat he was shoved off of by pressure from President Recep Tayyip Erdogan, it has emerged that his powers and those of fellow mayors across the country are being whittled down, part of a broader strategy to hobble opposition-run municipalities’ to ability to govern effectively.. Cumhuriyet reported that a Ministry of Commerce circular published in May took away mayoral authority to appoint the heads of municipality-run business enterprises and handed it over to district councils instead.

The companies, ranging from horticultural landscaping giant Agac ve Peyzaj to gas provider IGDAS, are a huge source of income — and political patronage. According to the Istanbul municipality’s own figures, their annual turnover is around 24 billion liras or roughly $4 billion, BBC Turkish reported.

And this is why the new rules were likely introduced. Erdogan’s Justice and Development Party (AKP) candidate lost to Imamoglu twice, in the original March 31 nationwide poll and in the rerun held on the grounds that officials overseeing the first balloting had been unqualified.

The same officials had also supervised the election of district administrators, municipal councillors and local officials, held concurrently with the initial mayoral vote. Yet the outcome for all three went unchallenged, likely because the AKP won 45% of the local councils. “The message to Istanbul voters is blunt,” wrote Marc Pierini a visiting scholar at Carnegie Europe. “Elections are free as long as the AKP wins.”

The effects of Ministry of Commerce move have already been felt in the capital Ankara, where officials appointed to the executive board of the municipality-run bread maker Halk Ekmek by the capital’s new CHP mayor Mansur Yavas failed to be approved by the commerce registry. The registry is attached to the Ankara Chamber of Commerce, presided over by Gursel Baran, who according to Turkish media reports is a cousin of Erdogan’s wife, Emine.