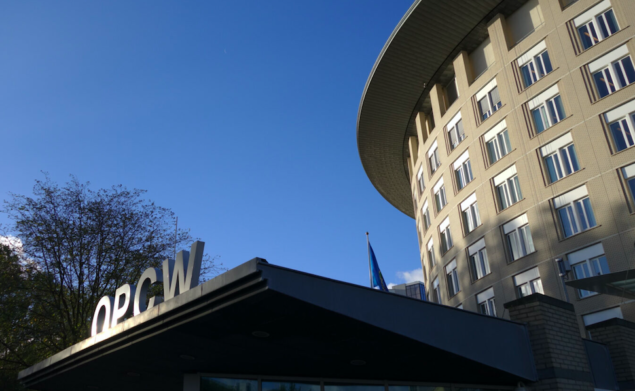 A group of OPCW insiders have just spoken out against a new report that blames the Syrian government for an alleged 2017 chemical weapons attack.

Over the past year, the Organization for the Prohibition of Chemical Weapons (OPCW) has been quietly facing a crisis of credibility. The crisis started when whistleblowers within the organization shared information that contradicted the findings of an OPCW investigation into the April 2018 alleged chemical attack in Douma, Syria. Leaks and whistleblower testimony show the organization suppressed the findings of its experts to fit the narrative that the Syrian government was responsible for the attack. That crisis of credibility continues. A group of OPCW insiders have just spoken out against a new report that blames the Syrian government for an alleged 2017 chemical weapons attack.

On April 8, the OPCW issued the first report from its new Investigation and Identification Team (IIT), a unit of the organization established to identify the perpetrators of chemical weapons attacks inside Syria. The new IIT report found “reasonable grounds” to conclude the Syrian government was responsible for three chemical attacks in Ltamenah, Syria at the end of March 2017. Specifically, two sarin attacks on March 24 and 30, and one chlorine attack on March 25th. The three alleged attacks jointly “affected” 106 people and did not claim any lives.

The Grayzone published a response to the IIT report from a group of OPCW insiders who called the credibility of the IIT “compromised” and said the report is “scientifically flawed.” According to The Grayzone, the authors who wrote the piece “represent the view of, at minimum, a small group of current and former OPCW officials who took part in its [the IIT report’s] drafting and review.”

The insiders question what motive the Syrian government would have to use chemical weapons, pointing out the government’s advantageous position over the opposition at the time. They also point out using chemical weapons would risk western intervention. “Let’s say they took this wild risk by using sarin …They did this by supposedly dropping a couple of sarin bombs on fields; agricultural lands in the middle of nowhere. Really?”

One fact the insiders take great issue with is that no members of the OPCW fact-finding mission (FFM) that initially investigated the Ltamenah incidents, and no members of the IIT ever deployed to the site of the alleged attacks. Instead, the investigators relied on evidence provided to them by members of Syrian opposition groups. The insiders wrote, “not one member of the IIT conducted a field investigation. Literally everything in the case has been provided by the sworn enemies of the Syrian government.”

The insiders say the opposition groups brought “evidence” to the FFM over a period of months and years, and the handovers were generally done in Turkey. “The narratives, the witness accounts, the soil samples, the metal fragments, the photographs and videos; every item of so-called ‘evidence’ had been provided by those who have everything to gain by implicating their enemies in a chemical attack.”

The insiders say the IIT is made up of investigators “without any background or expertise in chemistry, chemical weapons processes or technology, weapons systems or ballistics.” Therefore, the investigators are completely reliant upon experts approved by the OPCW. According to the insiders, these experts “represent the same Western and NATO intelligence agencies, units, institutes, laboratories and individuals that have already become so heavily invested in ‘proving’ the complicity of the Syrian government.”

If the Syrian government was not responsible for any chemical attacks at Ltamenah, it would point to staging by the opposition. The insiders explore how this could have been done. They again point out that the evidence the FFM and IIT used – soil and gravel samples and metal fragments – was given to them by opposition forces, some was even delivered over a year after the alleged incident.

“Reasonable grounds” was the same language used in the final FFM report on Douma, which was published in March 2019. The report found “reasonable grounds” to believe a chlorine chemical attack likely occurred. Although the report did not explicitly attribute blame, it ignored an engineering assessment by an OPCW employee that concluded there was a “higher probability” the two cylinders found in Douma were “manually placed at those two locations rather than being delivered from aircraft.” This conclusion would point to a staging. Ignoring this conclusion, like the OPCW did, would lead the reader to believe the Syrian government was responsible. The engineering assessment was published by the Working Group on Syria, Propaganda and Media in May 2019, kicking off the Douma whistleblower scandal.

So far, four whistleblowers from the OPCW have come forward to speak out against the Douma investigation. The Douma incident resulted in airstrikes against Syrian government targets from the US, UK, and France. Two of the whistleblowers who spoke out both claimed US officials were brought in to OPCW headquarters to present “evidence” to the FFM that the Syrian government was responsible for a chlorine attack in Douma. The Douma scandal shows the OPCW has been operating with a pro-western government bias.

The IIT is expected to release reports on the April 2017 attack in Khan Shaykhun and the April 2018 incident in Douma. The alleged attack at Khan Shaykhun resulted in US airstrikes on a Syrian government airbase. Similar to the Ltamenah incident, the Khan Shaykhun FFM was unable to visit the site of the alleged attack and relied on other groups to provide evidence. Among those groups were the Syria Civil Defence, also known as the White Helmets. This group of first responders claims to be neutral in the conflict but receives the bulk of its funding from western governments. Out of all the incidents the IIT is expected to report on, the Douma incident is the only one where an OPCW FFM was actually deployed to the site of the alleged attack. But when that FFM reached conclusions not acceptable to the OPCW and the western powers it favors, the team was replaced.

After the IIT published its report on Ltamenah, Secretary of State Mike Pompeo released a statement that said, “The United States shares the OPCW’s conclusions.” Pompeo went on to praise the organization, “The United States commends the thorough investigations and expert work of the OPCW, which has again demonstrated that its efforts in Syria are unbiased and professional.”

The OPCW’s credibility is able to survive since most western mainstream media outlets refuse to cover the Douma scandal. When the scandal is mentioned, it is usually referred to as “Russian disinformation.” In a story about the coming IIT reports, The Guardian quoted a chemical weapons expert who referred to the scandal as part of “Russian-led disinformation campaigns.” The expert said, “For example, the supposed whistleblower controversy at the OPCW last year, which the organization comprehensively rejected with an official inquiry. Even though the criticism was found to be baseless it does not stop the conspiracy theorists.”

The two whistleblowers at the center of the controversy responded to the OPCW’s “official inquiry” in letters published by The Grayzone, and in Peter Hitchens’ blog at The Mail on Sunday. The whistleblowers’ responses completely dismantle the OPCW’s weak attempt at downplaying the leaks and discrediting the two men. As far as the scandal being a “Russian-led” disinformation campaign, the leaks and dissent came from within the OPCW, not from Russia.

As these IIT reports come out, it is important to look at them in the proper context. The OPCW should not have the power to assign blame while the Douma scandal goes unresolved. The IIT reports will likely be weaponized by western powers to increase sanctions on Syria – collectively punishing the citizens of a sovereign nation trying to rebuild after nine brutal years of war.

Dave DeCamp is assistant editor at Antiwar.com and a freelance journalist based in Brooklyn NY, focusing on US foreign policy and wars. He is on Twitter at @decampdave.