Canada’s official opposition party in Parliament is a trade union-supported social democratic party called the New Democratic Party. On the Ukraine file, the party is jostling to be more hawkish than the hawks. 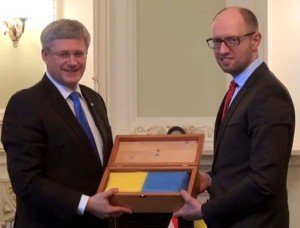 The Canadian government is in the front ranks of the NATO countries imposing economic sanctions on the Russian people and staging aggressive military exercises against them in the neighbouring countries to Russia in eastern Europe. The Conservative Party government has committed soldiers, fighter aircraft and a naval ship in the Mediterranean Sea to the anti-Russia effort. It is one of the more bellicose governments decrying ‘Russian aggression’ in eastern Ukraine, while suporting the warmaking governing regime in Kyiv.

At home, the Canadian government panders to the extremist Ukrainian Canadian Congress and the UCC’s support to the extreme and fascist right in Ukraine.

But all of that is not good enough for the NDP. As the enclosed article from the Globe and Mail daily newspaper explains, the NDP wants even more aggression against Russia, including more aggressive economic sanctions.

On November 29 in Toronto, NDP Member of Parliament Peggy Nash shared a pro-war speaking platform with a representative of the fascist party in Ukraine, Right Sector. It was an event to commemorate the one-year anniversary of the Euromaidan movement. Here is a summary of her speech as published by the organizers of the event: 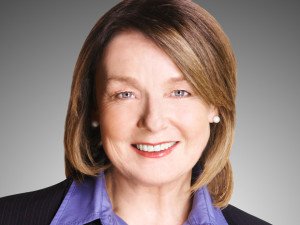 Peggy Nash, Member of Parliament from the New Democratic Party, who has been a long-time supporter of Ukraine’s pro-democracy movement, addressed community leaders and guests, expressing how moved she was by the commemoration of peace and social justice. Peggy Nash underlined the appropriateness of having leaders representing many different faiths. She believes that through faith, the Ukrainian nation has expressed courage and determination, which allowed them to continue to fight. “Today, one year later, we honour those who fell, and we also remind ourselves that so much has been achieved.”

Peggy Nash also added that she is very proud of the Ukrainian Canadian community for providing constant physical and emotional support to the families of those who died, to the wounded, to the refugees and others in need. In addition, Nash underlined the importance of a continuous action by the international community. “One, it is important to stand firm against Putin and the foreign aggression of Ukraine, and we cannot ever accept the loss of Crimea or the loss of the territories in the east. We have to stand firm in solidarity with Ukraine!”

Peggy Nash also touched on the importance of sanctions, and the support Canada is ready to give in terms of helping build democracy and offering a great deal to help for the Ukrainian people to overcome the economic crisis.

The main speaker at the event was Valeriy Chobotar, a paramilitary of the Right Sector flown all the way from Ukraine for the event.

Was it a conscious decision by Nash to share a speaking platform with a fascist speaker and a Ukrainian organization in Canada that supports such fascism? Or is this a naive and uninformed politician over her head and drawn into an invitation she did not understand and research ahead of time? Nash is a longtime trade union representative who has seen no shortage of negotiation battles with large, ruthless corporations. Her electoral riding in downtown Toronto consists of many Ukrainian Canadians who support the UCC. Are Nash and her party naive, or are they panderers to fascism and extremism in Ukraine? Only Peggy Nash, Paul Dewar and their  NDP cohorts know for sure.

The next public event of the Ukrainian Canadian Congress is a fundraising dinner on February 22 featuring another extreme-right guest speaker from Ukraine, Andriy Parubiy. He is currently a deputy chairperson of Ukraine’s Parliament. He was a founder in 1991 of the Social-National Assembly, which was a fount of the extremist, right-wing movement in Ukraine that is very influential in the halls of government and in the country’s military institutions today. He was a commander of the violent, extremist ‘battalions’ during the Europmaidan protest movement in Ukraine one year ago. Following the overthrow of Ukraine’s elected president one year ago, Paruiby became secretary of the National Security and Defense Council. That was a key body to launch the war in eastern Ukraine in April 2014. He was eased out of his position later in the year as international attention began to focus on the influence of the extreme right in the Ukrainian government.

Canadians can still do business with Rosneft, despite new sanctions

The sanctions Canada slapped on Russian state-owned energy giant Rosneft this week are well short of a blanket ban on business with the Moscow firm, amounting to what experts call “relaxed measures” that bar only transactions such as longer-term lending by Canadians.

The Conservative government is touting the measure as part of the “toughest sanctions regime” against Vladimir Putin’s continuing aggression in Ukraine. Ottawa announced more sanctions and travel bans Tuesday evening, with Rosneft being the biggest target on the list. But the leeway granted to Canadians to continue doing business with Rosneft speaks to the challenges of punishing a company that has interests in Canada.

Rosneft owns 30 per cent of Exxon Mobil’s oil project in the Cardium Formation in the foothills of southern Alberta.

NDP foreign affairs critic Paul Dewar said the Harper government shouldn’t be pulling its punches when it comes to sanctions. “We may have a loud voice but we also need to have a very big stick.”

Canada, which has levied sanctions on 270 individuals, entities and companies in Russia and Ukraine, had until this week resisted even adding Rosneft to the sanction list even though the United States added it last July and the European Union last September.

John Boscariol, a Toronto lawyer with McCarthy Tétrault, said the sanctions on Rosneft forbids only certain debt financing transactions with the firm, with the biggest impact being a ban on lending money to the firm for 90 days or more. “Given Rosneft has an investment here, I can see why [Ottawa] wouldn’t do the full ban.”

Most of the Ukraine-related sanctions that Canada has levied on companies over the past 11 months go much further. They forbid Canadians both inside this country and abroad from engaging in any dealings with those targeted, including selling goods and providing financial services to them.

The Department of Foreign Affairs, Trade and Development declined to explain, when asked, why Ottawa didn’t impose a blanket ban on business dealings with Russia’s biggest petroleum company. It instead released a statement that talked up Canada’s record on the Ukraine file. “Canada has the toughest sanction regime in the world, which has been co-ordinated with our allies to target key individuals and entities and to isolate Russia politically and economically,” Foreign Affairs spokesman John Babcock said. “The sanctions imposed in co-ordination with our partners and allies are without a doubt having an effect on the Russian economy.”

Mr. Dewar says another blind spot for Canada is the lack of action on Rosneft president and former Russian deputy prime minister Igor Sechin, a close ally of Mr. Putin. Both the U.S. and the European Union have blacklisted Mr. Sechin over Russian aggression in Ukraine. “Sechin is really important. This is a guy who was just meeting with Putin last week. He’s his former deputy prime minister and confidant and they can’t muster up the courage to put him on the sanction list when others have,” the NDP critic said.

Rosneft was still irked Wednesday by the restrictions on behaviour in Canada. A Rosneft spokesman, speaking to the Russian News Service, was quoted in the Moscow Times disparaging the Canadian oil industry and blaming Ottawa’s policies on the Ukrainian lobby in Canada.

“In Canada the [oil] industry is in a near-death condition. This was sanctions against the departed, and I don’t mean Rosneft, I mean Canadian oil production,” Rosneft spokesperson Mikhail Leontiev said. 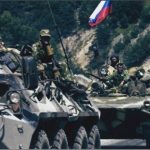 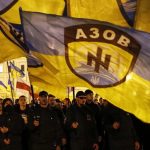