On Holocaust Memorial Day, remember too that the Nakba is an indelible part of Israel’s history 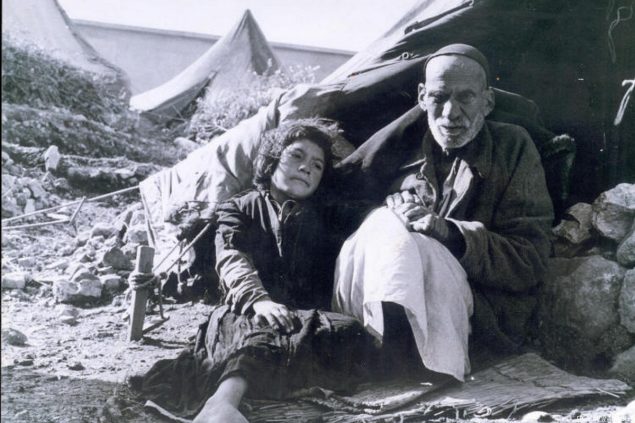 An elderly Palestinian and a child during the Nakba [Hanini/Wikipedia]

Written last month, on Holocaust Memorial Day, this piece by Yvonne Ridley is no less relevant today. In light of the Trump / Netanyahu “Middle East Peace Plan”, what is happening to the Palestine people now and has been relentless since 1948; it is undeniable that the Nakba is part of Israel’s history.

There is an indelible link between the Holocaust and the current situation of the Palestinian people; to deny this simple fact exposes a deep-seated flaw in Zionist ideology. I am not trying to minimise Jewish suffering or draw parallels between the Nazi genocide of European Jews and what has happened to the Palestinians since 1948; it is simply undeniable that the Nakba is part of Israel’s history.

There is no doubt in my mind that the Holocaust was the greatest crime of the 20th century because of the sheer scale of the premeditated and industrialised murder of six million Jews as well as others who the Nazi’s regarded as “undesirables”, such as Roma, homosexuals and disabled people. Survivors recount horrific examples of ethnic cleansing, torture, cruelty and savagery, often corroborated by the Nazi hierarchy’s meticulous recording of the whole truly awful scenario. Coming after 2,000 years of persecution, it is easy to understand why, for Jews, the Holocaust remains so raw and painful.

Nevertheless, like it or not, the Palestinians are part of the post-Holocaust narrative. Their modern history and current situation cannot be separated from events in the Nazi concentration and extermination camps. They too are the victims of a catastrophic series of 20th century events in Europe. Tragically, their suffering has endured for more than 70 years and has yet to be concluded. With no end in sight, it will last until the international community acknowledges the wrong that has been inflicted upon them, and works collectively towards a just solution.

That is why seasoned BBC journalist Orla Guerin would have failed in her duty as a journalist if her short news item marking Holocaust Memorial Day had ignored the Palestinians. Guerin devoted the first four minutes of her piece to a moving interview with Rena Quint, a Holocaust survivor, and concluded her report at the Yad Vashem World Holocaust Remembrance Centre in Jerusalem. There, the camera filmed a group of Israel Defence Forces personnel, while Guerin explained: “Young soldiers troop in to share the binding tragedy of the Jewish people. The State of Israel is now a regional power. For decades it has occupied Palestinian territories. But some here will always see their nation through the prism of persecution and survival.”

As a journalist she could not produce a story in Jerusalem about the Holocaust without referencing the suffering of the Palestinians. Yad Vashem itself stands just a couple of kilometres away from what was the Palestinian village of Deir Yassin where, in 1948, a month before Israel declared itself as a state, Zionist militias — the forerunners of those young Israeli soldiers — massacred more than 200 Palestinian men, women and children. The Holocaust is often cited as the reason why the state of Israel was created and where around half of the world’s Jews now live, although the seeds were planted at least 50 years earlier. For Guerin to talk about how the Zionist state came into being without the slightest acknowledgement of Palestinian displacement and suffering under Israeli occupation would show a serious lack of journalistic integrity.

Such integrity was missing in the comment piece written by my former Express Newspaperscolleague Stephen Pollard, the current editor of the Jewish Chronicle, in which he took aim at Guerin. According to Pollard, what she produced for the BBC news report about Holocaust Memorial Day was “something truly shocking”.

“In all honesty,” he continued, “I cannot recall a more foul – sickening, indeed — report by any journalist, either in print or broadcast.” Such exaggerated rhetoric takes the issue totally out of context; indeed, it cheapens his own and other criticism on social media.

As a crime of massive proportions, the Holocaust is incomparable in so many ways, but to ignore the plight of 750,000 Palestinians who were driven from their homes and land in 1948 by the nascent Israeli state is dishonest. Around 50,000 Palestinian Nakba survivors still remember the ethnic cleansing that they faced before, during and after the creation of the state of Israel. They and their descendants today account for the more than seven million Palestinian refugees scattered across the Middle East and the wider diaspora. 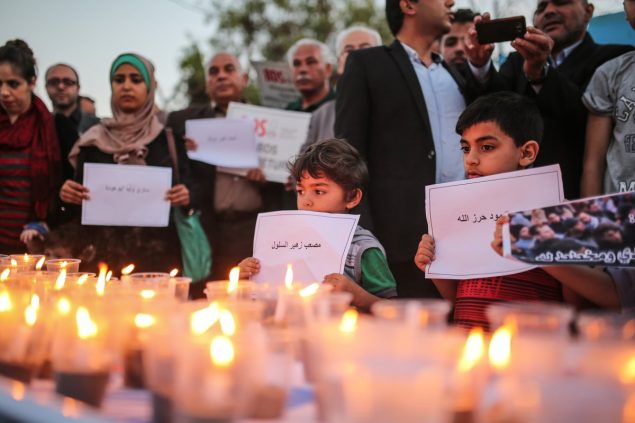 Palestinians light candles in memory of those killed by Israeli forces during a protest to mark the 70th anniversary of Nakba in Gaza City, Gaza on 16 May 2018 [Mustafa Hassona/Anadolu Agency]

While Pollard may want to airbrush the Palestinians from Israel’s creation and bloody history in order to preserve its self-declared exceptionalism, it serves nobody’s interests to do so. If Jews still feel the pain of the Holocaust after almost eight decades, they surely must also be able to empathise with the pain felt by the Palestinians who remain the unacknowledged victims of the Holocaust’s many dreadful consequences. Such empathy should be natural, without anyone having to draw provocative and unwarranted parallels between the Holocaust and what Israel has done for more than 70 years.

To be fair to Pollard, as editor of the Jewish Chronicle he also published a defence of Guerin’s piece, written by award-winning British-born filmmaker Gary Sinyor who observed that had she ended her piece after the first four minutes there would have been no complaints. After a lengthy analysis and rebuttal he concluded: “So, the reason the Board of Deputies [of British Jews], this paper and Twitter has got worked up is because of the words ‘For decades, it has occupied Palestinian territories but…’ Her Majesty’s Government advice on travel to Israel describes it as travel to ‘Israel and the Occupied Palestinian Territories’. No one is complaining. So it’s juxtaposition. Fine.

“There was no need for those words. Guerin – yes typically – has mentioned the Occupied Territories in describing Israel but she’s not comparing the Holocaust with the Palestinians. One unnecessary reference in a report that reiterated the truth of the Holocaust, that addressed rising anti-Semitism, that movingly depicted a survivor from Belsen, that showed Israeli soldiers learning about the tragedy of their fellow Jews, that took up the last four-and-a-half minutes of the BBC’s main news bulletin the day before the actual memorial service, surely we can live that. In fact, we should be grateful.”

The pro-Israel lobby will continue to disagree with Sinyor, I suspect, until the last vestiges of support for Palestine and its people have been crushed into silence. Until then, even basic mentions of Israel’s brutal military occupation of Palestinian territories will trigger waves of orchestrated anger in the media and diplomatic circles.

British journalist and author Yvonne Ridley provides political analysis on affairs related to the Middle East, Asia and the Global War on Terror. Her work has appeared in numerous publications around the world from East to West from titles as diverse as The Washington Post to the Tehran Times and the Tripoli Post earning recognition and awards in the USA and UK. Ten years working for major titles on Fleet Street she expanded her brief into the electronic and broadcast media producing a number of documentary films on Palestinian and other international issues from Guantanamo to Libya and the Arab Spring.