‘Putin’s Russia’, ‘the America of Obama and secretaries of state’, ‘the Ukrainian minority: pro-Nazi’, ‘NATO and international conflicts’, ‘Cold War 2.0’–these are the keywords of the new documentary film by director Igor Lopatonok, produced by Oliver Stone. Ukraine on Fire received its national premiere yesterday at the Taormina Film Festival in Sicily. 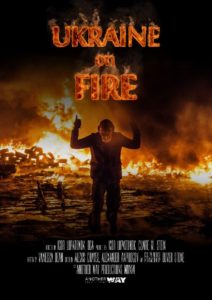 The film is a jewel that has further enriched the quality of the movies playing at Taormina Film Fest, a venue which brought to Sicily some of the greatest exponents of American cinema, including Harvey Keitel, Ray Winstone, Richard Gere and Oliver Stone, winner of two Academy Awards.

‘Ukraine on Fire’ is a daring and extraordinary project that reveals the background of the conflict between Ukraine and Russia, a page of history that has already left its mark in the modern geopolitical scenario. It reveals the historical background of the Ukrainian crisis. Oliver Stone interviews the main actors of this phenomenon, including the president of Russia, Vladimir Putin, and the former president of Ukraine, Victor Yanukovych. Men of power share with the American producer their thoughts regarding the reasons for the conflict and the possible ways to solve it.

The beginnings of the turmoil in Ukraine occurred in the winter of 2013-2014 in Kiev, during the ‘Euromaidan’. Oliver Stone speaks to Ukraine’s key figures of that period, including the former president Yanukovych and the former interior minister, Vitaliy Zakharchenko. Collecting and analyzing the facts, the film explores the concept of ‘color revolutions’: how they are born and how they evolve over time.

We had an opportunity to put a few questions to Oliver Stone. Here is some of our brief interview.

Salvatore Giannavola: The documentary addresses the phenomenon of American NGOs, non-profit organizations. Reference is made to the work in Ukraine of the NGOs of the American tycoon George Soros and the elite of world finance. Mr. Stone, how did creative financing help spark the riots that have taken place, successively, in Lebanon, Libya and then Ukraine?

Oliver Stone: The question is very complex. As you have just seen, the documentary refers to the George Soros-funded NGO that has played a crucial role in the development of democratic uprisings in Ukraine. I believe that not all U.S. NGOs deserve praise. Many are, in fact, expressions of influential individuals, as in the case of Soros, and are aimed at pursuing goals that go beyond the well-being of peoples. In some cases, such as this, they are designed to achieve purposes quite different.

‘Ukraine on Fire’ has been very well received by the public in Hall A of the convention center. Sincere and heartfelt applause came from a disturbed audience, which was shocked and grateful at the same time for an exemplary and illuminating project. The film is a lesson in geopolitics with agitated rhythms to graphic effect.

During the press conference following the screening of the documentary, Lopanotok and Stone responded to questions from journalists and students intrigued by events exposed by the documentary film. The film prompted prolific debate fueled by the director’s and co-producer’s responses, who from the beginning of the press conference said they wanted to hear feedback from the audience, especially the younger members. As Oliver Stone admits, the project aims to inform a Western world very often trapped by biased and distorted information flows  from media. Here we offer you some of the answers that emerged during the conference:

What were the difficulties related to the implementation of this project?

‘Ukraine on Fire’ leads people to ask questions. It was difficult to understand the triggers and  dynamics of Ukraine’s geopolitical crisis. As for me, I faced major complications that have emerged from the linguistic differences that in some ways have distorted the content of events. Names are sometimes very similar, but for me it was difficult to understand them and to distinguish them. We in the West, precisely for these reasons, very often tend to accept the view as reported by European and U.S. media.

What has been the public and institutional reaction?

The attacks I suffered were many, sometimes verbally violent. To me this is inconceivable. The facts must be submitted and we have to go beyond these types of reactions.

‘Ukraine on Fire’ shows how politics is maneuvered by large power systems. What is your position with respect to the ideas of the two candidates in the American presidential Trump and Clinton?

I’d rather not speak about my position on the U.S. presidential election as the subject goes beyond the issues addressed by the film.

Watch the trailer for Oliver Stone’s Ukraine On Fire here, or click the screen below. The website of the Taormina Film Festival is here.

February 22, 2017: You can view Oliver Stone’s Ukraine On Fire in a Russian-language dubbed version that is sub-titled in English, recently posted to YouTube, here.