Several thousand residents of Odessa, Ukraine held a march and ceremony in central Odessa on April 10, 2016 to commemorate the anniversary of the liberation of the city by the Soviet Red Army in 1944 from Nazi Germany occupation. 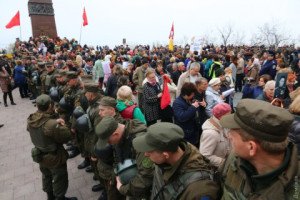 Commemoration in Odessa on April 10, 2016 of 1944 liberation of city from Nazi Germany

The march gathered at the monument to the city’s liberation. Other commemorations took place in the city on the same day.

Following the central ceremony (pictured), many participants gathered at Kulikovo Field in the center of the city to honour the victims of the arson attack by neo-Nazis on May 2, 2014. Dozens of protesters opposing the coup government in Ukraine were killed that day. Kulikovo Field lies adjacent to the Trade Union House where the murderous arson attack took place.

Right-wing gangs attacked the gatherings at the war memorial and at Kulikovo Field. They also attacked a commemoration march by anarchist groups in the city. A well known leader of anarchists in Odesssa, Vyacheslav Azarov, was injured and hospitalized. His attackers were briefly detained by police and then released.

A report on the day’s events, with several videos, is published here on the website of the UK-based Solidarity with the Antifascist Resistance in Ukraine (UK). 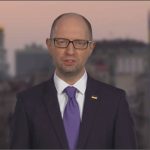 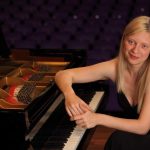 Ukrainian pianist Valentina Lisitsa returns to Toronto after TSO ban, lets her fingers do the talkingSolidarity with Ukrainian people, Ukraine