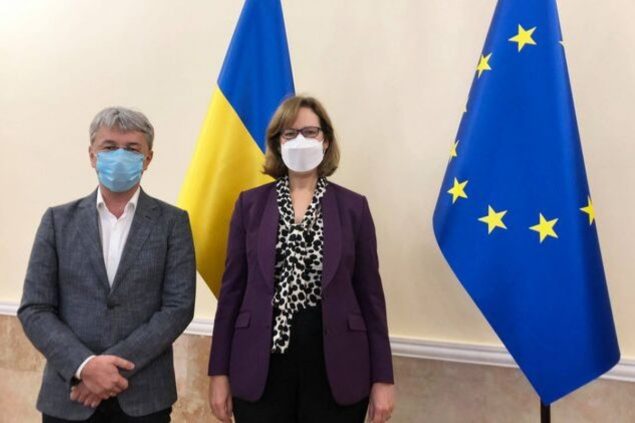 The Chargé d’Affaires of the United States, Kristina Kvien, summoned the Minister of Culture of Ukraine Oleksandr Tkachenko

During October, the most important event in Ukraine was the local elections, which took place against the backdrop of a sharp rise in cases of Covid-19 in the country. Held on October 25, these were for city mayors and deputies for city/village/regional councils. They were part of Ukraine’s decentralization reform, which the European Union had been advising should be carried out since 2014. Briefly, one of the main reasons for the civil conflict in Ukraine has been the excessively strong centralization of power in Kiev, which has not allowed the regions of the multinational country to pursue their cultural and economic policy.

In addition, the central authorities used to deplete local budgets, leaving the regions almost nothing for the development of their infrastructure. As a result, the country’s roads, hospitals, schools, bridges and water pipes (inherited from the Soviet Union) gradually degraded. The reform of decentralization, by design, was supposed to give more rights and resources to provinces, but then it was leveled off by many new laws and amendments.

Among them was the revision of the Electoral Code, adopted shortly before the local elections. Under the pretext of a possible “growth of separatism” Kiev did not allow regional parties and independent candidates to participate in local elections. From now on, only representatives of major all-national parties may be elected, even to village councils.

The electoral deposit for candidates was significantly increased and communist and leftist parties are still banned. Furthermore, other local and regional politicians and candidates have been forced to bow to the oligarchs who control large national parties and media. As a consequence, the decentralization reform, which was supposed to relieve the existing tension between the center and the regions, was emasculated.

These local elections show that even village and city councils will be fully controlled by Ukraine’s oligarchs, who have created a number of new national parties for this. The presidential party “Servant of the People”, although founded only last year, has already lost the confidence of the electorate. In the event, it hasn’t managed to get its mayors elected or even gain control over councils of the large cities. While a year ago it was able to receive an unprecedented level of support and form a parliamentary majority, this year it gained a mere 4% to 20% of the votes, according to the region.

The high level of popularity of the Servant of the People party last year was due to the unification of various kinds of voters with different views – due to the uncertainty of the promises of the new president. Now local elections have shown that voters are returning to their traditional political niches, and the country is still divided between East and West.

At the same time, new political projects were created by the very same oligarchs who had previously promoted the president Petro Poroshenko and then Vladimir Zelensky.

Thus, control over central Ukraine at the local level was shared between Igor Kolomoisky, who founded a new party For the Future, and Rinat Akhmetov, a businessman and the wealthiest individual in Ukraine, who founded the new Proposition party, which included elected mayors of many cities. In western Ukraine, the control over local councils was shared by the party of former President Petro Poroshenko, supported by nationalists, and the pro-fascist anti-Semitic Svoboda (Freedom) party. In the east, influence was shared by the Opposition Platform (a fragment of the Party of Regions of the ousted President Yanukovych in 2014) and new political projects of Rinat Akhmetov.

Nevertheless, record abstentions by Ukrainian voters should also be noted. Only about a third of those eligible to vote (35%) actually participated in the elections, due to the fear of contracting the coronavirus and the lack of any hope that the country’s problems could be solved by voting. Despite this, following the Euromaidan in Ukraine, the minimum turnout threshold for elections was canceled; that is, an election would be recognized as valid even if only one constituent voted.

Against the background of a sharp decline in the popularity of the new president and his Servant of the People party, the local elections became a kind of rehearsal for the future parliamentary and presidential elections and a “test drive” for new political parties, promoted by same oligarchs. It should be noted that almost all political parties in Ukraine are short-lived and usually survive only one or two political seasons, as they regularly deceive voters, who vote for a new party in a subsequent election, even though the same people are behind it.

Such a strategy should perpetuate the same politics and the irreplaceability of real power, despite the constant change of political media figures (aka political front men).

In most economic and foreign policy issues, this strategy is coordinated and controlled by the embassies of Western countries, primarily the United States and Great Britain. It assumes neoliberal reforms, the regular purchase of expensive weapons through loans, the continuation of ultra-nationalist policies and provocations against neighboring Russia.

In October, as Ukrainians prepared for local elections, President Zelenskiy made some international tours. In particular, while visiting Great Britain, he signed a loan agreement for 1.25 billion pounds, a sum the UK has loaned to Ukraine for building the Navy and a naval base [1]. At the same time, Ukraine’s Foreign minister Dmitri Kuleba has offered [2] Great Britain the opportunity to establish two British naval bases, on the Black and Azov Seas, in the hope of drawing Great Britain into a conflict with Russia.

Immediately after his visit to the UK, President Zelensky visited the Turkish President Erdogan to conclude a contract for the purchase of assault drones [3] that Turkey is now supplying to Azerbaijan during the conflict over Nagorno-Karabakh. The Ukrainian military hopes to use them in the war against the republics of Donbass. Russian modern air defense systems can effectively counteract them, but the fact is that in the Donbass Ukraine is not at war with Russia, and the republics of Donbass have only old Ukrainian air defense systems.

However, in order to promote the necessary nationalistic and militaristic narratives in the media, it is necessary to ban alternative media. It is noteworthy that this was demanded from Ukraine in October by the US embassy, ​​which usually declares its loyalty to the principles of democracy.

The Chargé d’Affaires of the United States, Kristina Kvien, summoned the Minister of Culture of Ukraine Oleksandr Tkachenko on October 27. According to Tkachenko, the American embassy wants the adoption of a media law in “independent” Ukraine, of which he is also a co-author, as a matter of urgency.

“The implementation of the law on media is also an important step, which Mrs. Kristina considers necessary for implementation in the near future,” Tkachenko wrote [4]. The US Embassy confirmed the essence of the meeting and its desire to adopt such a law for Ukraine.

The bill on media, which the U.S. embassy is promoting, should make it easier to block unwanted websites and TV channels.

In the spring, Harlem Désir, the OSCE Representative on Freedom of the Media, analyzed it and came to the conclusion that it does not meet international standards and restricts freedom of expression.

“The legal analysis further raises concerns over the possibility of imposing a penalty on certain media outlets, by banning their dissemination. Imposing a general ban, affecting all the content of a specific media outlet, during a non-specified period and based on a very widely formulated justification, represents an excessive and disproportionate measure in light of the fundamental right to freedom of expression. This may have a chilling effect on the Ukrainian media sphere,” the OSCE statement said [5].

The bill contains a number of prohibitions. In particular, under the threat of a fine or deprivation of licenses, any positive mention of Soviet figures or the display of Soviet symbols is prohibited [6]. Simply put, even if a Soviet scientist (or a soviet one of Ukrainian heritage) discovered something good, or shared information that a Soviet trade union built a sanatorium for its workers, it is classified as forbidden information.

It is also prohibited to “popularize the organs of the aggressor state, [and / or] its officials” (Russia), as well as to deny the occupation of the territories of Ukraine by the Russian Federation. Programs or materials (except informational) that mention names of persons included in the list of those who threaten the Ukrainian national media space are prohibited by the bill. Therefore, some political aspects become a sort of religious dogma which can’t be discussed or questioned.

Back in July, the National Union of Journalists of Ukraine (NUJU) urged MPs to dismiss it as repressive. “We stand guard over the rights of journalists and, most importantly, the rights of citizens to receive independent information, convenient or inconvenient for any politician. We defend the public interest. The protest statement has already been signed by more than 200 editorial teams, and this statement is supplemented with new signatures every day. The main appeal of the journalistic community is not to finalize the bill, but to reject it”, said Sergei Tomilenko, chairman of the NSJU [7].

The request for censorship may be prompted by the criticism of US actions in Ukraine, expressed by a number of Ukrainian TV channels. In August, Kristina Kvien announced an “onslaught of disinformation” in the media and social networks that allegedly undermined “important reforms in Ukraine”, something that in her opinion, started after the Maidan and has been continued by President Volodymyr Zelensky. She also considers the statements that Ukraine is dependent and controlled from the West to be a lie.

“They suggest that the West seeks to “run Ukraine” or pursue its own interests at Ukraine’s expense. This is a false narrative”, stated Kristina Kvien [8].

She was also especially outraged by the story of the US-run biolaboratories acting in Ukraine, which aroused certain suspicions amid the spread of the coronavirus.

In order to silence Ukraine’s critics of the “successes of Ukrainian democracy”, the US Embassy has demanded that censorship should actually be introduced, only postponing this demand until the end of local elections in Ukraine, as an unpopular decision.