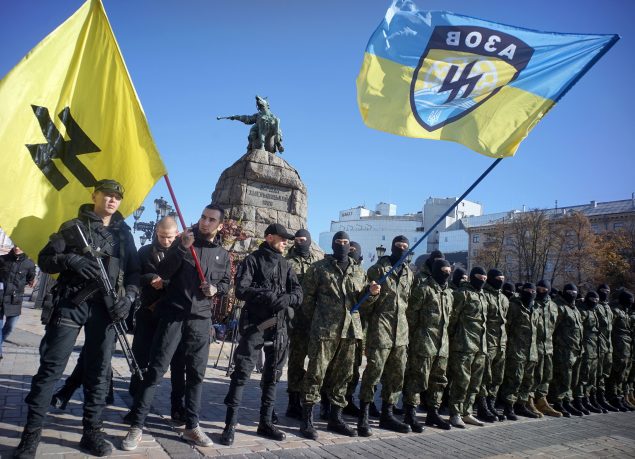 Azov battalion was once a paramilitary but has now been made an official part of the Ukrainian national guard. The black hooked symbol on their flags is a “wolfs angle” which was a Nazi SS symbol used during World War 2. Photo: Medium

Written exclusively for the New Cold War website, regular contributor Dmitriy Kovalevich dissects the complex conflicts and toxic ultra-right culture that have been affecting Ukraine and its ruling ‘Servant of the People’ party throughout October and the increasing cynicism of the ministers and their far-right rhetoric.

Throughout October, Ukraine’s political system has been shuddering from demonstrable conflicts inside the new ruling ‘Servant of the People’ party. At least four major factions have crystallised and infighting among them has led to a series of resignations by officials and governors only recently appointed. It has transpired that within the president’s faction – inside parliament itself – exist informally: 1) the group of oligarch Igor Kolomoysky; 2) the group of Arsen Avakov, the Minister of Internal Affairs, who controls neo-Nazi armed groups like the ‘Azov’ regiment; 3) a group associated with western-funded NGOs (the so-called “Soros” group); and 4) the group of the president, Vladimir Zelensky (mainly former actors), the weakest and the most inexperienced of the four.

The strongest factions (controlled by Kolomoysky and Avakov) are actively dividing Ukraine into their own separate spheres of business interest, like robber barons; taking over businesses of the former rulers. This is somewhat typical for Ukraine: each change of power leads to a redistribution of property. Gradually, the oligarchs who are close to central power, grab most of the country’s assets, and then the ‘defeated’ oligarchs unite and organize a new ‘coup’ against them. Thus, since 1991, Ukraine has been caught in a vicious circle of oligarchic wars. The only novelty of recent years is the justification of these oligarchic wars using anti-corruption rhetoric in order to please western observers.

Bogdan Petrenko, deputy director of the Ukrainian Institute for the Study of Extremism, claims that the mounting divergences inside the ruling party may soon lead to its disintegration, as nothing unites these people apart from the figure of Zelensky himself. According to Petrenko, “Inside Zelensky’s team, we’ll reach a splitting point, regardless of Kolomoysky’s activities, because Zelensky’s party has no ideological core. The only thing that unites them is Zelensky’s electoral rating. As soon as his support drops below 50%, we’ll see right away how the influential groups in this team begin to crystallize” [1].

Neoliberal reforms for benefit of business but not workers

There are, nevertheless, some aspects where the interests of all factions converge; specifically, neoliberal reforms. In early October, Ukraine’s politicians and ministerial cabinet reported on their plans to review the current Labour Code.

“You will see that the Labour Code is very liberal, too liberal for employers,” said Galyna Tretiakova, Ukraine’s Minister of Social Policy and promised that the new Labour Code would be compiled in favour of employers. She also said the code would “oppress [human] rights a little bit” and “discriminate against wage workers”.

According to her, the government will respond to the needs of big business, even though trade unions have not been invited to participate in discussions for the new code. According to the proposals, the working day could be extended to as much as 12 hours and paid maternity leave abolished [2]. The cynicism of lawmakers is concealed by their anti-discriminatory rhetoric – with claims that employers don’t like hiring young women; so concerned are they by possible maternity leave. According to them, this leads to employment discrimination and in order to remove this discrimination, they plan to abolish maternity leave. The increase in working hours is motivated by the fact that in reality hired workers often overwork already but instead of fighting workplace violations they propose to legalize them.

These labour reforms are said to ‘attract foreign investors,’ but Ukrainian workers are migrating by the million and therefore, stripping their rights seems wholly irrational. Ukrainian enterprises are already facing mounting problems with the country’s workforce, even under the current conditions. People are preferring to seek employment in Russia or Europe for larger salaries. “The first half of 2019 ended badly for employers. They’re frantically searching for specialists and unskilled workers but due to labour migration, the shortage is very serious,” complains the Ukrainian business magazine, Dengi [3].

Vicious threats on the frontline not followed up

In other issues, important for ordinary Ukrainians, the new rulers remain hesitant and faint-hearted. According to the new poll by the social group Raiting, most of all Ukrainians want peace – 71% of respondents [4] claim that Ukraine primarily needs peace. However, new attempts to withdraw Kiev’s armed forces from the frontline in Donbass have still not been successful – mainly because the new rulers fear the armed far-right groups that wish to continue the war.

Towards the end of October, president Zelensky personally visited the Donbass frontline. He also visited the positions of far-right armed militants, who refuse to withdraw their forces or obey central command. Following hours of talks, the president… thanked them and left the war zone. However, after the visit far-right militants and nationalists began to threaten to overthrow or even kill the president if he insisted on withdrawing the armed forces [5]. These threats were not followed up by criminal charges, even though on the same day the Ukraine court sentenced [6] a man for publicly wearing a T-shirt bearing the acronym ‘USSR’.

Kiev still holds many other political prisoners, while neo-Nazi gangs continue to attack rallies in support of them. On October 24, the Right Sector and Freicorps, both far-right groups, boasted [7] that they had prevented opposition activists from holding a rally in support of Mekhti Logunov, who is currently serving a 12 year prison sentence imposed in July 2018 by Poroshenko’s government for alleged ‘high treason.’ This is even though Logunov was 84 years old at the time. In an attempt to unearth a plot against Ukraine, the country’s security service (SBU) claimed that he possessed a USB (memory stick) containing secret information and had been planning a terrorist act; however, Logunov was known as a popular pro-socialist activist in Kharkov region and physically, due to poor health (he can hardly walk and has digestive problems), is incapable of carrying out a terrorist act. Rather, Mekhti Logunov is a renowned scientist and some experts claim that the authorities are simply fearful that his knowledge could be used by the Russians. In the previous year he had consulted Russian colleagues on a new high-tech project for recycling waste.

Other political prisoners are also being held in pre-trial detention centres while waiting to have court cases heard against them. The regular practice of suppressing political opposition includes accusations of criminal charges and pre-trial detention. The court usually releases the detained individuals but only after the court hearing, which could take as long as five years to be heard, following their detention. In many cases, the targets are Ukraine’s anti-nationalist and antifascist activists and their release would annoy the far-right armed gangs who are easily capable of intimidating any Ukrainian court.

On October 29, the Kiev side finally reported readiness to withdraw the troops from one of the settlements in Donbass; however, far-right armed gangs were mobilized and came to the settlement (Zolotoye), to replace the regular army. It all looked very strange: the president personally trying to convince the Azov neo-Nazis to merely simulate the forces’ withdrawal and not to spoil the president’s image before an audience of international observers, in the wake of International Investment forum in Ukrainian Marioupol. Meanwhile, Arsen Avakov, Minister of Internal Affairs, who stayed on from the previous government, comes to the Donbass frontline at the same time [8] as the Azov neo-Nazis to support them. This is because US Congressmen are planning to recognize Azov as a terrorist organization [9].

Earlier in the month of October, the Ukraine’s new Prime Minister O. Goncharuk personally visited and supported the Ukrainian neo-Nazi band, Sokyra Peruna, known for its anti-Semitic lyrics. The event was organized by neo-Nazis from the C-14 group and others accused of murdering Ukrainian opposition authors, as reported by Bellingcat [10]: “Despite the fact that these far-right organizations have negligible popular support and virtually non-existent electoral power, they are over-represented among veterans’ rights groups, including in meetings directly with Ukraine’s President. As the veterans’ concert shows, these issues are symptoms of a much larger problem relating to the far-right’s exploitation of veterans’ issues as they continue to have success mainstreaming themselves in Ukrainian politics and society.” These developments reveal the actual continuation of the former regime’s policy, despite the hopes of the majority of voters.

The fact that the vast majority of the Ukrainian voters’ hopes have yet to be fulfilled is beginning to negatively impact on the new president’s popularity. The inertness of the old policy is leading to mounting levels of disillusionment and, at the same time, the ruling party is showing a tendency to split into subgroups with contradictory interests. Therefore, Ukraine’s political experts and deputies of the ruling party are already beginning to speculate on the possibility of holding extraordinary elections next year, in a new attempt to find a way out of this quagmire.