November update: Ukraine’s anniversary of the victory of corruption 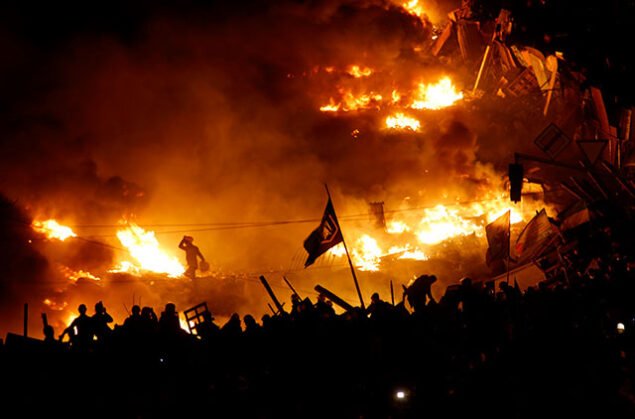 New Cold War’s regular contributor and analyst, Dmitriy Kovalevich uncovers the myths of the Maidan and the ongoing corruption that permeates so many aspects of Ukrainian politics and society.

In November, Ukraine traditionally celebrates the anniversary marking the beginning of the Maidan protests launched in 2013 by a group of liberals and radical nationalists, when ex-President Yanukovych postponed the signing of a free trade agreement with the EU. Four months later, this led to a coup d’état, an assault by far-right nationalists on dissident groups in eastern Ukraine. This has led to the loss of territories and a civil conflict that has been dragging on for more than six years. There were a few celebrations planned for this year but the pandemic is affecting these against a background of overcrowded hospitals.

Myth of the so-called “revolution of dignity”

It is worth noting that this November, almost on the eve of the Euromaidan anniversary itself, the Ukrainian police came with a search warrant to the management of the ‘Euromaidan Museum,’ originally founded to lionize the event. For the last six years, the Ukrainian authorities have been creating the myth of the so-called “revolution of dignity” that began in 2013, allocating huge financial resources for the filming of low-quality patriotic movies, rewriting school textbooks and erecting memorials to ‘Maidan heroes.’ However, there is no significant return on these funds, as most of them are simply pocketed, due to the corruption that has permeated every sphere of Ukrainian society.

The management of the museum is suspected of have embezzled most of the money allocated from the public purse for the construction of the memorial to the so-called heroes of Maidan (the “Heavenly Hundred”), which was supposed to have been opened in February 2019. So far there is still there no trace of the monument, not even of a construction site. The funds were allocated from December 2018 to August 2019. According to law enforcement officers, 111 million out of 150 million UAH were allocated to contractors, but the work was never actually carried out, the terms established by the contract with the contractors has long expired and the money has disappeared[1].

An opportunity for plunder

Ukrainian lawyer Andrei Portnov, commenting on the investigations, considers the embezzlement of funds to be a logical consequence of the “Revolution of Dignity” (aka EuroMaidan), which was carried out simply to provide an opportunity for plunder. The lawyer wrote, “Search in the Museum of the Revolution of Dignity. I think this is one of the few cases when you don’t even need to try to find out additional details, in connection with which the search is being carried out. The reputation and credit history of this wandering circus, thinking of themselves as of heroes, is proved by hundreds of examples and facts. Since the heroes of the Maidan have been searched, it means that they have stolen something, embezzled, concealed from their friends, hidden, cashed out, robbed someone or stolen something from the budget. It is always a very simple, one-way and understandable scenario.” [2]

Do these searches indicate any changes in the ideology and policy of the current leadership of Ukraine, or a sort of rejection of “Maidan values”? No way. President Zelensky and his party, Servant of the People, actively support the myths of the Maidan. A few days ago, the presidential faction introduced a bill providing for the provision of “Maidan veterans” with lifelong benefits, pensions and apartments. For this project they want an additional 86 billion UAH[3], and not the “miserable” 150 million allocated for the memorial. They need to buy up radical nationalists – the only pillar propping their power in the poorest country of Europe. 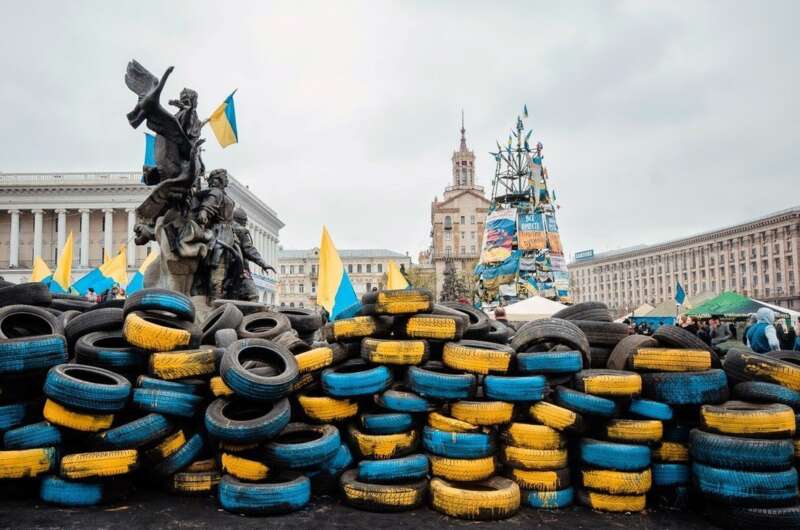 Parliament has decided on the meaning of the word “revolution” vests.ua

On the same day, Igor Umansky, the deputy of the President’s Office and the ex-Minister of Finance of Ukraine, resigned. Before leaving, he gave a briefing outside the parliament, where he said that almost all the funds, allocated in the spring to combat Covid-19, had been stolen.

Umansky said: “2020 will be remembered by Ukrainians for a long time. Not only because of the pandemic and the ineffective fight against it, but also because of the unprecedented level of growth in corruption and the loss of an adequate perception of reality by the authorities.”[4] Earlier, in the spring of 2020, he resigned from the post of Minister of Finance, stating that he had uncovered large-scale embezzlement schemes at the customs and tax services, the turnover of which, according to his estimates, ranges from 5 to 10 billion UAH per month.[5] According to him, if all these corruption schemes were to be closed, Ukraine would not need the IMF loans, for the sake of which it sacrifices its sovereignty.

Concern about a huge “hole” in the public budget

Nevertheless, in November, the head of the National Bank of Ukraine (NBU), Kirill Shevchenko, urgently flew to Washington to negotiate with the IMF on new loans – as soon as the American media published information about Joe Biden’s likely victory. An urgent trip by the head of the NBU to the ‘parent state’ is due to the fact that the IMF, as the main creditor of Ukraine, is concerned about the state of Ukrainian finances and consequently, concerned about the ability to pay off loans. However, the Ukrainian authorities are concerned about a huge “hole” in the public budget, which is growing every month. The growth of the budget deficit was caused, among other things, by the enormous embezzlement of funds, and the “holes” were supposed to be covered by borrowing from the IMF and other external creditors—these receipts were already included in the draft budget for this year—although they were not yet agreed with the creditors.

As Ukraine’s MP from the president’s party, Aleksandr Dubinsky says, “creditors are only interested in one thing – that we do not arrange a default”, adding that within the last 3.5 years $25 billion were ‘washed out of Ukraine’. And then just enough money was allocated to prevent a possible default, according to the MP[6]. Traditionally, the Ukrainian authorities provoke the next escalation of the conflict in Donbass, using it as an excuse to ask for more money, since they are “at war with Russia.” And this usually works.

The fact that Euromaidan was instigated with the aim of embezzling budget funds or foreign loans is obvious, even to ordinary citizens. for example, on the November anniversary of Euromaidan, due to the law on decommunization, a Ukrainian woman was sentenced to five years for posting on social media a portrait of the former Soviet leader Leonid Brezhnev[7]. The woman accompanied her post with the comment: “If thieves are removed from power in Ukraine, then in five years people will say: we don’t need f…ing Europe.”

Maxim Goldarb, one of the leaders of the Ukrainian Union of Left Forces, summarizes the results of the Euromaidan in 14 points.

3) 10 million temporal labor migrants, driven out of the country

7) decrease in the population by 6 million people, according to the most conservative estimates

11) the wildest, greedy, cruel, ruinous model of the oligarchic system of government

12) the dominance of foreign agents in administration of the country

13) the cult of proto-Nazism – primitive nationalism, which was made a norm of law

14) enrichment due to the ruin of fellow citizens and the state budget by a small stratum of outright villains and criminals.

And all this is accompanied by the whining over the anthem and the drawing national emblems. Now find here even the smallest sign of the words, “dignity” and “freedom,” Goldarb added.[8]

Over the past seven years, thanks to the requirements of the IMF and the appetites of corrupt Ukrainian officials, the cost of electricity has increased by 246%, gas – by 884%, cold water – 584%, hot water – 502%, heating – by a record 1223%. Over the same period, the national currency, as well as real wages, collapsed by 252%.[9] During the same period, prices and tariffs in the breakaway DPR and LPR in Donbass remained practically unchanged, since they do not follow the requirements of the IMF and the United States, which financially only extend “help” to Ukraine.

Priority against Russia or corruption?

In the recent past, the US Embassy in Ukraine has been claiming that Ukraine is “undergoing reforms” and fighting corruption. However, over the years the existence of the anti-corruption bodies of Ukraine (established with the help and under the control of the United States), have shown zero effectiveness. Practically nothing of the stolen funds has been returned to the public budget, and none of the corrupt top officials have been punished.

“The most important war for Ukraine is an external one, and you cannot burn a house from the inside and protect it at the same time. Saying this, I may become de facto an ally of some not very progressive forces, but even so statehood is a priority for me.” 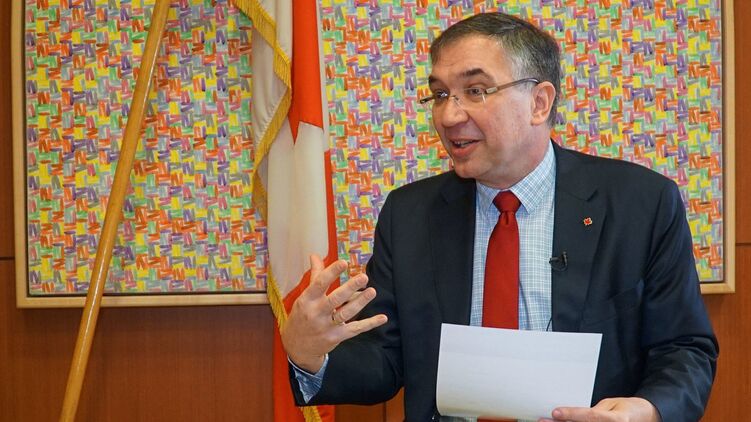 “That is, corruption can be tolerated until it is possible to secure Ukraine in the foreign policy theatre,” the Ukrainian edition Strana.ua[10] concludes from his interview, noting also that Russia is too powerful for Ukraine to “defeat” it. As a result it has become a convenient excuse to “fight with Moscow” for decades without denying oneself at the same time from public budget robbery.

In his interview, the Canadian Ambassador to Ukraine also notes that Kiev has given control of its Foreign Office to the UK, and essentially a peaceful solution to the Donbas conflict has not happened due to demands by the US on this issue. “I was at a meeting with key American figures, among whom were representatives of Biden’s team.” Vashchuk said, continuing: “All these Americans told the Ukrainians: “Wait a few more months, do not make any fundamental concessions now, because the general political situation globally can change in your favor, and then you will be able to calibrate your approach in a new way.”

In fact, anti-corruption bodies (and in actual fact the US concept of the “fight against corruption”) are about something completely different but not the prevention of corruption and embezzlement.

Earlier this year, the Ukrainian economist Victor Skarshevsky wrote[11] that within the last six years Ukraine’s public budget spent 10.7 billion UAH on six anticorruption bodies (established by the country’s Western partners). But what is the effect? Within the first four months of this year all they collectively returned a mere 14 000 UAH or $515 to the public coffers; in other words, almost nothing.

These bodies were created mainly to control the Ukrainian authorities, which must share the stolen funds with Western partners, and the corruption cases will be investigated only in the event of an attempt to change foreign policy. Only in this case will Ukrainian officials be reminded of everything that anti-corruption bodies have registered. The essence of this ‘fight against corruption’ is in keeping corrupt officials on the hook as long as possible, while not stopping or preventing embezzlement. As long as they remain loyal to the United States, they continue to easily get away with corruption.