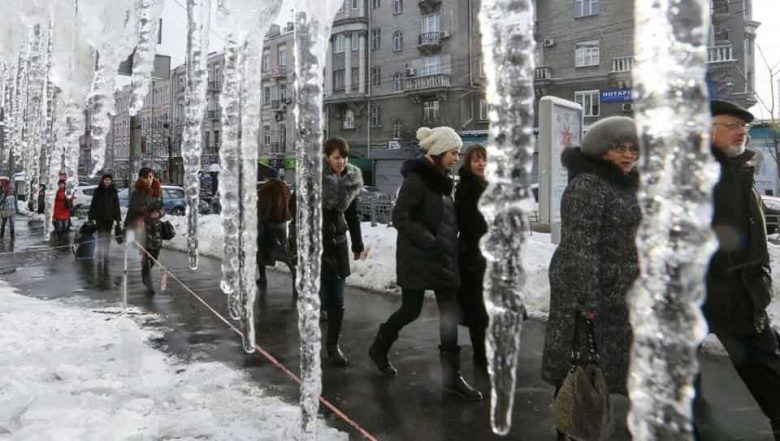 People walk past icicles, which hang from the roof of a building in a street in central Kiev, Ukraine.(REUTERS)

This original NCW article offers an insightful review of political events in Ukraine during the month of November, including the recent Donbass Elections, calls to boycott them and explanations for the lacking of heating in Ukrainian homes.

On November 11, presidential and parliamentary elections were held in the Donbass republics. They were mainly required to prevent a power vacuum occurring, due to the recent assassination of Alexander Zakharchenko (see my September update). As expected, the US embassy in Kiev denied the people of Donbass the right to vote and called upon Donbass residents to boycott the elections, accusing Russia of having organized them.

The US Embassy in Ukraine wrote on its Twitter feed [1]: “While Ukraine is taking positive steps to promote peace, Russia is stoking conflict by staging sham ‘elections’. Residents of eastern Ukraine should boycott these ‘elections’, which are not in line with either the Minsk agreements or Ukrainian law”. The elections were also condemned in advance by the US State department and the German chancellor, as well as the French president.

However, Denis Pushilin, the acting head of DPR, responded to this condemnation, stressing that the Minsk agreements say nothing about the elections of parliaments or presidents in the Donbass republics, since Kiev does not recognize any electoral prospects there, apart from regional elections as a part of Ukraine.

“The main argument put forward by our ‘Western friends’ is that the elections are in contradiction with the Minsk Agreements. Such an argument is baseless. The Package of Measures on the implementation of the Minsk Agreements envisages coordination between the sides only when it comes to municipal elections. Nothing is said there about electing heads and members of parliament. In this sense, we have a solid foundation,” said Pushilin [2].

There was a similar reaction from Lugansk. “The elections in Donbass are not in breach of the Minsk agreements and first of all are held in accordance with the constitution and the citizens’ constitutional rights, which are granted by international law,” Vladislav Deinego, the LPR acting foreign minister, said in a statement [3].

Kiev expectedly launched criminal prosecution against the organizers of the elections, threatening them with all possible punishment. In the Kiev-controlled part of Donbass, Ukraine’s Security service (SBU) placed the billboards threatening the voters: “We’ll identify everyone,” read the SBU billboards [4]. But, nevertheless, the elections were held under the observations of 48 international observers from 14 countries in the DPR and 46 from 22 countries in the LPR. The observers mainly came from Austria, Greece, France, Germany, Turkey, Netherlands, Finland, Russia, Italy, Belgium, Norway, Chile, Serbia, Abkhazia, South Ossethia, Ireland, DR Congo, Poland, Syria, Iraq, Brazil, Yemen, Canada and the USA. They claimed that the elections were in accordance with the norms of democracy.

The elections turnout in the DPR was 80% and the overwhelming majority voted for the acting head of the DPR, Denis Pushilin (60.8% of the votes). His campaign was centred around promises of peace, as the people of Donbass are tired of the war. His main slogan was: “A peaceful republic for peaceful citizens.” He also promised to continue the policy of the assassinated Donetsk leader, Alexander Zakharchenko, although it is unlikely this promise can be fulfilled because it is one that largely depends on the desire for peace in Kiev, which could stop the conflict at any moment. But this will not happen as, in the case of a genuine ceasefire, the economic problems inside Ukraine would immediately become apparent.

In the LPR, with a 77% turnout, the elections earned the acting LPR head Leonid Pasechnik (68.3% votes). It should be also noted that the new heads of the republics are somewhat ‘technocratic’ in their approach; focusing on economic troubles, unlike the former heads who were rather more military leaders.

In both Donetsk and Lugansk, some voters explained their choices by claiming that they ‘didn’t know the other candidates’. In other words, the alternative candidates didn’t lead their campaigns in a way that was active enough for them to become recognizable to the voters. It should also be noted that some of the known opposition leaders, including the leader of Donetsk communist party, were denied participation due to their lack of valid candidates’ registration.

The parliamentary elections in the LPR and DPR actually corroborated the results of the presidential ones. In the DPR 72.5% voted for the party ‘Donetsk Republic’ – that of the elected head, Denis Pushilin; while the opposition party, ‘Free Donbass’ won 26% of votes. In the LPR 74.1% of votes were won by the movement, ‘Peace to the land of Lugansk’ (‘Mir Luganschine’) and 25.1% – ‘The Economic Association of Lugansk.’

The Kiev pro-government media also criticized the elections as a base for potential autonomy for the seceded republics inside Ukraine. It should again be stressed: to begin with the Donbass republics initially demanded simply autonomy and language rights in Donbass. But this was exactly what Kiev did not want to grant them, leading to the launching of a military operation in 2014. Due to these elections, Kiev is now accusing Moscow of trying to integrate Donbass back to Ukraine on ‘its own terms’ – as autonomous republics and Kiev is rejecting this prospect, claiming that the integrated autonomies would become ‘Trojan horses’ inside Ukraine. This was also a view expressed by A. Grytsak, the head of Ukraine’s Security Service (SBU) [5].

Commenting on the elections in Donbass, ‘The Ukrainian Week’ claimed: “As you know, Moscow is attempting to thrust the DPR/LPR back into Ukraine on its own terms – autonomously – and regularly insists on direct negotiations between Kiev, the “DPR” and the “LPR.” To enable the negotiations, the “republics” must delegate at least some legitimate representatives there. Therefore, at best, the “election” is an attempt to provide nominal militant leaders with some legitimacy [6].”

Kiev is still promoting the same policy of unification, rejecting any rights for ethnic minorities, and would like to integrate Donbass simply by force, expelling the ‘separatists’ –  i.e. the majority of the locals – anywhere, but out of the country. And Kiev still hopes that NATO troops will intervene and help to return the seceded territories.

Winter in the Ukraine and the lack of heating

Meanwhile, by mid-November the winter frosts had started all over Ukraine and the residents of many cities have begun to freeze in their homes, due to the lack of heating. The supply of natural gas supply has been cut for entire cities, leading to the temporary closure of schools and hospitals. This came about as a result of the rising gas prices – at the demand of the IMF and a new law which allows the gas supply to be cut even during the winter months. The former Ukrainian government did not allow this for humanitarian reasons.

Since many Ukrainians are unable to pay their gas bills, the amount of debt has skyrocketed. The amount of debt in Ukraine is quite an anticipated phenomena: according to the data [7] of the Ukraine’s Statistics Service (Gosstat), 52.9% of the average Ukrainians income is spent on food. As a result, they are often unable to pay their gas and electricity bills, so the Ukrainian gas company Naftogas decided to cut supplies to entire cities, not just those of individual debtors.

Moreover, it became apparent that due to corruption many of sums that had previously been paid have disappeared from the accounts of regional gas companies, which serve as mediators between Naftogas and individual consumers. From some cities, the Naftogas company is demanding that the consumed gas is paid for again, because it didn’t receive the money which the consumers had already paid to the mediators.

The crisis with heating has led to several riots in the freezing cities of Kryvyi Rih [8], Smila [9] and some neighbourhoods of Kiev (10). The Ukrainian media has also noted that all the freezing cities or city neighbourhoods are governed by mayors of the opposition or local administrations. This gives the opposition some grounds for suggesting that this is a form of government pressure against the opposition. Another worrying point is that during the wave of ‘gas riots’ in the freezing cities, anti-Semitic cries and speeches were often heard [10]. Although the heating crisis is a direct consequence of the IMF policy, some mobs and rioters are accusing this of being a ‘Jewish conspiracy’ aimed at ‘annihilating Ukrainians.’

The energy supply issue was also in the spotlight during the November visit to Kiev of the US energy minister, Rick Perry. Particularly noteworthy is that Rick Perry commemorated the ‘dead heroes of Maidan’ (people who died during Maidan protests in early 2014), stressing that they died for ‘economic independence’. And the best way to pay tribute to them, according to Perry, is to develop an energy infrastructure in Ukraine. And, according to him, there are some US companies that are ready to invest in Ukraine’s energy market. The point here is that, after the gas prices had been increased at the demand of the IMF, Ukraine’s market has become of special interest to US companies.

But during his visit the US energy minister mainly tried to boost the sale of US coal, US gas (LNG), US oil and US nuclear fuel to Ukraine. Rick Perry, the former Texas governor, said that Ukraine could become the ‘Texas of Europe’(12) and proposed to supply US liquefied gas from Poland (which is in the EU) and then to supply it to the EU. Looking at the map it is impossible to find any coherent reason for this route. Rick Perry actually used the liberal rhetoric of ‘freedom,’ acting as a trading agent who tries to sell more US goods and block the Russian gas pipeline projects. According to him, the US uses their energy resources as an “instrument of liberation, not as an instrument of subjugation’ [11]. The result of this kind of ‘liberation’ is an increase in the number of poor pensioners who commit suicide [12] in Ukraine because they can’t pay their gas or electricity bills.

But regardless of this, the Kiev government is ready to buy anything from the US, whatever the price, as Ukraine has become a semi-colonial country that is dependent on US support. Yet in August, president Poroshenko said to John Bolton, the US presidential and National Security advisor: “I’m pleased that coal from Pennsylvania is being supplied by locomotives from Pennsylvania” [13]. This is even though Ukraine has its own coal industry and locomotive producers – but they do not get orders from the state, even though they are on the verge of collapse. Meanwhile, the Kiev government is buying similar products from the US at much higher prices.

Historically, this kind of economic policy has been a distinctive feature of colonies and dependant states. And, like modern Ukraine, the leadership of such dependant states has become increasingly accountable to western governments rather than its own people.